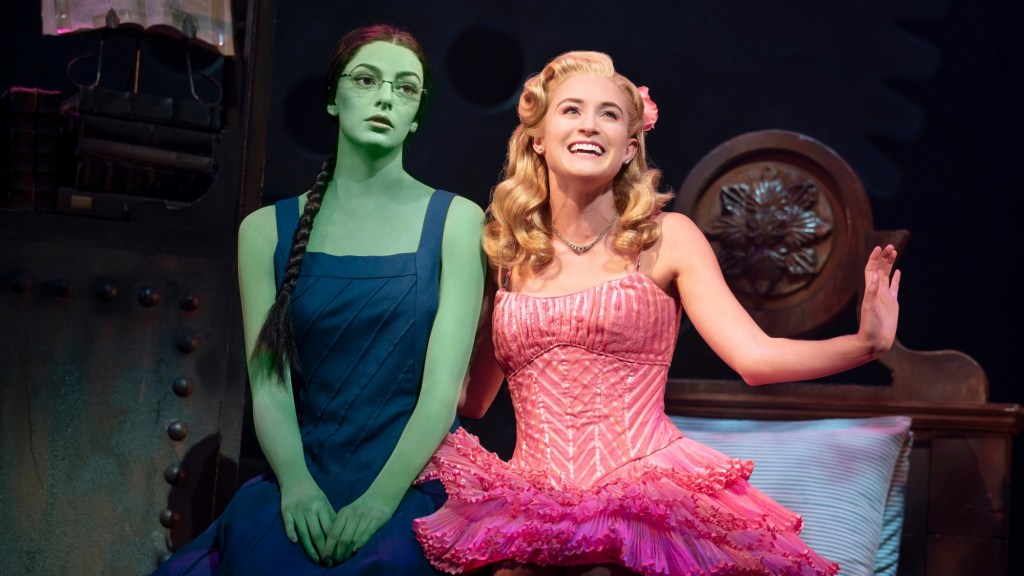 Let’s start this review with a question, not an opinion: Is “Wicked” the most popular musical created in this century?

In more than 18 years, across the country and the world, touring versions have been seen in more cities than any other musical, more than 100 cities in 16 countries to date.

Road production now at Segerstrom Hall over the next month is its fifth visit to Costa Mesa. As of this writing, coming off the omicron peak when Segerstrom’s shows were struggling to sell out, early selling is robust with less than 100 seats remaining for kid-friendly matinees over the next two weekends. (Tip for a child outing: aim for the February 27 performance at 2 p.m.)

What makes this show attractive?

In 2003, the main critics had a field day. Supreme arbiter of America’s live theater forever, The New York Times ruled dismissively, “‘Wicked’ does not, alas, speak with hope for the future of the Broadway musical.” (To get it wrong again, The New Yorker’s take on the show’s 22 songs: “…none of them are memorable.”)

But what those opening night eyes and ears failed to register was the show’s “it” factor, which struck me again on Thursday night: girl power! And on a level to match the energy of MCU superheroes of any gender.

“Wicked” is the rare Broadway musical to feature two female lead characters. A preamble/parallel to the original “Wizard of Oz”, the story, based loosely on Gregory Maguire’s novel, refocuses on the two main witches in a retelling of the history of Oz from their perspectives.

These college-aged women compete in the romantic competition, but the tale is more about their journey of self-discovery, how they feel about themselves and each other as they grow and change. they face unexpected truths about their world.

The musical continues to conjure up near impossible magic to appeal to all ages. Its propulsive action and color and a big bang score can be mesmerizing for younger participants, while being witty and wise on adult issues like complexion shame, political cynicism and whether it’s preferable whether or not to bottle his flying monkeys or release them. go wild.

A main conversation about any “Wicked” production centers around the two actresses who take on the lead roles of Glinda and Elphaba. How each of them does it, and how they do it together, is a key factor in whether the production will levitate and how high.

Even at her self-proclaimed 4-foot-11 height, Kristin Chenoweth’s original Glinda still casts a long shadow over successors who take on what super fans believe is still her role.

Perhaps the highest accolade for Allison Bailey’s current exploration of the character is that she doesn’t remind you of anyone else. Being herself is all it takes.

Glinda, to put it fondly, is equally spoiled, pretty and, well, blonde – hey, Elphaba says that about her, not just me! — as one would hope. But beyond the hair-throwing and self-aware flirting built into the role, Bailey brings a surprising and unexpected physicality to punctuate Glinda’s actions.

As the first act progressed, I eagerly awaited it with each subsequent move, not only wondering when the next leg kick or nudge would come, but also a little giddy to see how well thought out and choreographed the actress’ reading was in Glinda’s manifestation. inner dynamism as well as repressed vulnerabilities.

Elphaba is the clever counterpoint, and Talia Suskauer’s treatment of this older, wiser-than-her-age woman — a searing social conscience and a keen understanding of all the ways she fails to fit in — originates a game that is lovingly internalized.

It’s no easy feat, it’s as cheerfully loud a spectacle as “Wicked.”

An interesting quality of their shared performances is that in a musical with the famous star vehicle solos “Popular” and “Defying Gravity,” I was more drawn to their shared songs about their changing relationship. The precocious, amusing disgust in the ironic “What Is This Feeling?”

Other performances of note included Broadway veteran and Tony Award winner Cleavant Derricks’ vaudeville and vaudeville spin in the Sorcerer’s Lament of “Wonderful.” As the self-proclaimed brainless — aptly stated in “Dancing Through Life” — Jordan Litz as Fiyero is more than the show’s hunk, nicely unveiling his inner life as he wrestles with which witch to woo.

One last takeaway. “Defying Gravity,” Elphaba’s belted declaration of independence at the end of the first act, is one of musical theater’s biggest hits.

But right after, with the curtain down, the lights coming back on, in a theater almost full of a loaded audience buzzing with an excited buzz at what they had just been hit. Don’t we all deserve an elated mojo like this right now?

COVID-19 protocols: Attendees must show proof of full vaccinations and photo ID to enter the theater. Any ticket holder (including those under 12) without proof of full vaccination may present a negative COVID-19 test (PCR taken within 48 hours or antigen taken within 6 hours) of the performance. Home test results are not accepted. Regardless of vaccination status, wearing a mask is mandatory in all indoor spaces. Disposable 3-ply surgical masks, N95, KN95 or KF94 masks are recommended.

Hugh Jackman in “The Music Man” on Broadway