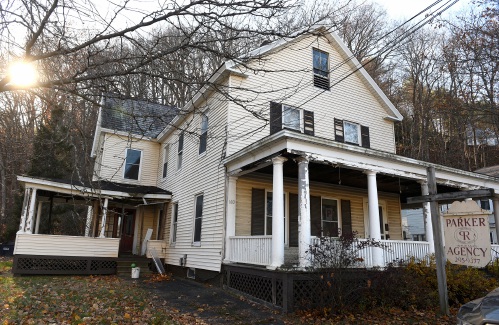 The National Trust for Historic Preservation, a nonprofit organization in Washington, DC, describes negligent demolition as when an “owner intentionally allows a historic property to suffer serious deterioration, potentially beyond the point of repair.” .

Is this happening at 160 Gates St. in downtown White River Junction?

The two-story house and the adjacent barn – the last farm building in the town center – date from the 1880s. There is no doubt that they need work.

Ken Parker, owner of the property and former Hartford breeder, estimates that repairing and upgrading current building codes could cost between $ 735,000 and $ 1 million.

The buildings having “fallen into a state of disrepair” to the point that their rehabilitation is not financially viable, Parker seeks the approval of the city to demolish them.

It would be a shame.

Both buildings are considered “contributing structures” to the White River Junction Historic District and listed on the National Register of Historic Places.

Some members of the Hartford Planning Commission and the Hartford Design Review Committee are far from excited about Parker’s plan. At a meeting on November 1, planning committee members John Heath and Colin Butler even raised the issue of the â€œnegligent demoâ€.

But it looks like Hartford officials will be hard pressed to spare the two structures from a wrecking ball. Under the city’s zoning ordinance, the owner of a historic building is only required to demonstrate that “the rehabilitation of the building, or part of it, would cause undue financial hardship.” (The ordinance also allows the demolition of historic buildings deemed “structurally defective,” but Parker does not make that argument.)

The planning commission is expected to approve Parker’s demolition request at its December 6 meeting.

After Wilder’s Cathy Melocik heard about the upcoming vote, she took to Hartford’s mailing list to let residents know about the issue.

â€œOur history is crumbling, building by building,â€ said Melocik, who has lived in Wilder for over 20 years.

For 45 years, Parker ran his insurance agency in the apartment building, which was originally a single-family home. Mae Gates, a key figure in the early development of the village’s inner city, owned the house until 1891, according to the writings of the Hartford Historical Society.

The building has been vacant since Parker sold its insurance agency in 2018. A wooden “Parker Agency” sign still swings from a post in the front yard. A gray Cadillac, whose license plate expired in 2006, sits next to the bard.

Parker told the Planning Commission at its November 1 meeting that the house suffered extensive water damage in March, after the furnace stopped working, causing pipes to freeze and burst. Parker valued the repairs between $ 195,000 and $ 200,000. Meanwhile, Parker estimated the demolition would cost around $ 40,000.

I wanted to raise the issue of careless demolition with Parker, but he didn’t respond to phone messages. I was also interested to hear about his business relationship with Northern Stage, the professional theater company in White River Junction, which could benefit if the demolition is carried out.

Public records indicate that Northern Stage is ready to purchase the property once it becomes vacant. If all goes as planned, Northern Stage would then set up accommodation for its employees on the site.

The acquisition of 160 Gates St. appears to fit perfectly with Northern Stage’s business strategy. In 2015, it went from the old Briggs opera house on South Main Street to new digs in what was once Miller Auto, a car dealership and repair shop, on Gates Street.

The state-of-the-art, $ 9 million theater was a welcome addition to the downtown area. If only Northern Stage had just stopped there.

Instead, the nonprofit embarked on a real estate buying spree, spending more than $ 1 million on three downtown properties that previously served as affordable rental housing. Northern Stage says it needs apartments for its guest artists and seasonal staff.

In 2018, Northern Stage purchased the old Twin State Typewriter building, which has five apartments upstairs. Last year he bought a six-apartment house on Gates Street, a few doors down from the theater. In April, she bought a two-story apartment building – once a single-family home – on the same street.

He is now the â€œoption holderâ€ on 160 Gates. The city valued the property at $ 264,700 this year, but I couldn’t find any public records showing how much Northern Stage agreed to pay.

With the support of its supporters with deep pockets, Northern Stage can afford to play the real estate game of the Upper Valley. But it comes at a price for fixed income residents and the working class.

In April, I wrote about a 60-year-old kitchen worker, a retired Dartmouth College housekeeper and an elderly disabled woman who were evicted from the affordable apartments in which they had lived for years to make room for the employees of Northern Stage.

And now the plot thickens.

Parker submitted his demolition permit application to 160 Gates on September 10. However, public records indicate that Northern Stage entered the scene much earlier.

In June 2019 – more than two years before Parker formalized his intentions – Northern Stage approached the state’s District 3 Environmental Commission, which covers Hartford, about a housing project it was considering for Gates Street.

Eric Bunge, Special Projects Manager at Northern Stage, requested what is known as a “jurisdictional opinion” under Bill 250, the state’s Land Use and Development Act.

Northern Stage wanted to know if the potential project required a Bill 250 permit.

What did Northern Stage have in mind?

Linda Matteson, the District 3 Environmental Commission coordinator, wrote that Northern Stage proposed to “demolish or convert the existing buildings at 160 and 178 Gates Street into staff quarters of up to 39 units.” (The house at 178 Gates is the one Northern Stage bought in April.)

Matteson ruled that Northern Stage would need a permit under Bill 250, noting that the proposed project was for 10 or more units and had no â€œaffordable housingâ€ component.

Apparently, that was enough for Northern Stage to curtail its grandiose plans. During the planning committee meeting, Bunge said Northern Stage wanted to build nine apartments at 160 Gates.

But that’s conditional on Parker getting his demolition permit. And Northern Stage is doing its best to keep the city going. To bolster Parker’s case, he brought in Bread Loaf Corp., a construction and design firm in Middlebury, Vermont. (Bread Loaf built the new Northern Stage Theater and also renovated the Hartford Municipal Building.)

In a November 10 letter to city officials, James Pulver, Bread Loaf’s vice president of architecture, wrote that the 160 Gates house is in “very poor condition and requires extensive selective demolition and rehabilitation to make it usable “.

â€œBased on Northern Stage Company’s working relationship with (Bread Loaf), we understand that there is no reasonable return without building demolition,â€ Pulver wrote.

Northern Stage “explores what is possible” with Parker and the city, she replied. â€œLike many employers and residents of the Haute VallÃ©e, Northern Stage faces the lack of workforce housing in our region,â€ she added. â€œWe continue to seek options to address the local housing shortage and its impact on our programs and services as well as our community. ”

I’m not sure bulldozing a historic home is the way to go, or for Northern Stage to promote its image as a community-conscious neighbor.

What if Parker and Northern Stage don’t get what they want?

Even if the planning committee vote goes according to plan, the fight is not necessarily over. Anyone participating in the proceeding has 30 days to appeal the decision to the Vermont Environmental Court.

There is also a chance that Act 250 could still come into play, Trieschmann, the state’s historic preservation officer, told me. It could be argued that the state’s environmental district decision requested by Northern Stage in 2019 also covers the demolition of the historic property, she said.

This could put the brakes on what Parker and Northern Stage have negotiated. It would serve them well to neglect history.

Jim Kenyon can be contacted at [email protected]

RISE OF THE CURTAIN: O THE HEART LEADS – Journal

10 family movies from the 2000s that deserve a follow-up