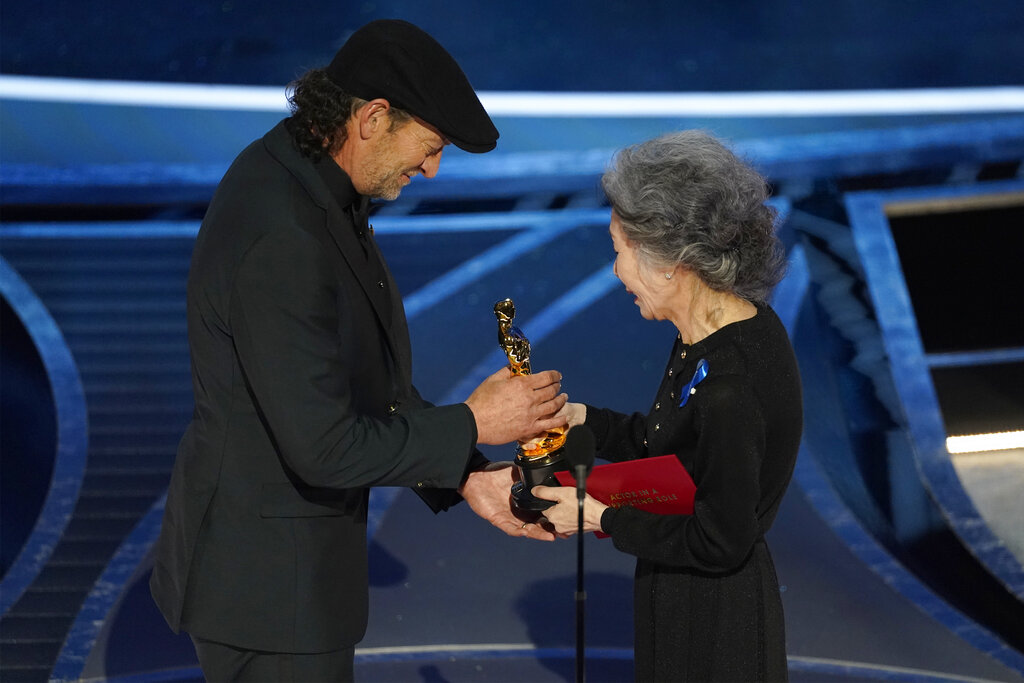 Kotsur became the second deaf actor to win an Oscar on Sunday night. His “CODA” co-star Marlee Matlin was the first to win Best Actress for “Children of a Lesser God” in 1987.

Kotsur was barely known as an actor before “CODA,” but he was considered an Oscar favorite after the acclaimed performance and wins earlier in the awards season.

“It’s for the deaf community, the CODA community and the disabled community,” Kotsur said, signing from the stage. “Now is our time.”

In his Oscar-winning performance in “CODA,” Kotsur has a spoken line, but it’s a good one. Urging his daughter, played by Emilia Jones, to pursue her dreams of singing and going to college, he said out loud, “Come on!”

For Kotsur, that single line meant a lot of rehearsal and the courage to, on a film set, speak dialogue he couldn’t hear himself. But Kotsur had also done it before. Years before, as Stanley Kowalski in a Deaf West Theater production of “A Streetcar Named Desire”, he had exclaimed “Stella!” night after night.

“Sometimes I ask hearing viewers what my voice sounds like,” Kotsur signs. “One person described it as a feeling of being comfortable and tucked into bed.”

Kotsur, who indeed exudes wrinkled warmth, is only the second deaf actor to be nominated for an Oscar. And like that “Go!” Kotsur, 53, hopes his achievement will resonate with inspiration.

“I hope young people who are deaf or hard of hearing can gain increased confidence and be inspired that they can pursue their dreams,” Kotsur said. “I want these kids to not feel limited.”

Sian Heder’s Best Picture nominated Apple TV+ release “CODA” elevated Kotsur to Hollywood’s biggest stages while making history for the deaf community. He is the first deaf actor ever individually nominated for a Screen Actors Guild award. The rush for accolades has been disconcerting. When he was nominated for a BAFTA, he celebrated so much he fell off his chair. Accepting the Gotham Award for Best Supporting Performance, he told the crowd that he was not speechless but “absolutely unmanipulated right now.”

“It’s just overwhelming,” Kotsur says of the cheer. ” It’s awesome. I feel like I can die happy, with a smile on my face.

The only one to experience something similar was Kotsur’s “CODA” co-star Marlee Matlin. In “CODA”, they play the parents of a deaf fishing family in Gloucester with a hearing daughter. Kotsur remembers watching Matlin become the first deaf actor to win an Oscar, in 1987 for “Children of a Lesser God.”

“I felt like I could have hope as a deaf actor,” Kotsur recalled in an interview with Zoom from his home in Mesa, Arizona, through an interpreter. “Of course, I hadn’t realized how difficult it would be to cross over into show business.”

Kotsur’s long road to the Oscars began, he believes, in elementary school. With few accessible television programs, Kotsur loved highly visual cartoons like “Tom and Jerry” and animatedly narrated them to his deaf classmates on the bus. His father, a police chief, would later affectionately call Kotsur a “risk taker” for continuing to gamble. He studied acting at Gallaudet University, then toured with the National Theater of the Deaf.

With few television and film opportunities available to deaf actors, Kotsur found freedom on stage. Beginning with “Of Mice and Men” in 1994, Kotsur has performed in about 20 productions at Deaf West, the nonprofit Los Angeles theater company founded in 1991. In one show, he met his wife, l actress Deanne Bray. He played Cyrano de Bergerac and starred in “American Buffalo”.

“Working with him in rehearsal is like being in the presence of a mad scientist,” Kurs said over email. “He’s always tinkering and tweaking, bringing in different elements of the character. This process doesn’t end until the curtain goes up on opening night.

On stage, Kotsur honed the full-body physicality of his acting. “It’s really important to me on stage to show emotion through sign language,” says Kotsur. “Sometimes sign language can be more three-dimensional and meaningful than spoken dialogue.”

Heder first saw Kotsur in two Deaf West plays: “At Home in the Zoo” and “Our Town.”

“And they were very different characters,” she said. “He is so charismatic, especially on stage. He just has this amazing presence and he’s so funny.

Kotsur had long been accustomed to seeing one-dimensional, victimized Deaf characters, but “CODA” presented something he had rarely seen. The Rossis of “CODA” may have to work a little harder, but they’re a family like any other, with fun conversations at the dinner table and the occasional quarrel. Frank de Kotsur is also a bit excited and a bit profane. In a scene where he teaches his daughter about safe sex, he mimics a soldier putting on a helmet.

Kotsur, long accustomed to hearing actors swear, reveled in Frank’s vulgarity; he proudly recalls the film’s back and forth with the MPA after “CODA” almost received an R rating. But to Kotsur, Frank is like a real deaf person – “a deaf person who works hard and makes .”

Perhaps Kotsur’s most moving scene is a moment shared in the bed of his truck with his daughter, Ruby. Unable to grasp Ruby’s singing talent, he listens to her sing, tenderly feeling the vibrations in her neck. The scene has deep echoes in Kotsur’s own life; he and Bray’s 17-year-old daughter is also a CODA (child of deaf adults) attracted to music.

“When my daughter plays music, she doesn’t know I’m behind her. I go up and touch the body of the acoustic guitar and I can feel the vibrations of the guitar,” says Kotsur. “I can do the same with the piano. I can put my arms on the grand piano and feel the vibrations as she practices.

“I had to go to the music store and I was like, ‘What’s the difference between an electric guitar and an acoustic guitar?’ So I decided to buy both and gift them to my daughter,” he adds. “I really love seeing her being so motivated by music as a hobby. I can’t take that passion away from him. I just need to encourage him.

The first time Kotsur read the script for “CODA,” he took it as a warning sign that, like his character, he isn’t quite ready for his daughter to leave home just yet. It’s personal relationships like these that have made it hard for the actor to let go of Frank.

“It took me about six months to disconnect from Frank,” says Kotsur. “My wife said, ‘Troy, would you please shave that beard? I can’t even kiss you.

For Kurs, Kotsur is nothing short of a pioneer. Thanks to him and Matlin, he says, there will be more work for deaf actors.

“Seeing the accolades confirms what we knew all along, that Troy is one of the greats,” Kurs says. “We’ve been waiting for the world to recognize this for some time now and hope that Troy gets all the hard work and kudos he so deserves, and future deaf actors don’t have to wait so long. be recognized at this level.

A now neater Kotsur has since appeared in the Disney+ series “The Mandalorian” as the Tusken Raider, for which he developed his own sign language. More parts await, as does an expected speaking tour to speak to deaf children and potential actors. But for now, he’s enjoying it as much as possible.

“I try to enjoy every day and every moment,” he says. ” I’m in no hurry. I’m not obsessed with winning. Those days will be over. I will never experience them again.

To sum up what it all means, Kotsur clutches his chin and compares himself to a single hair in a thick beard of talented deaf actors who didn’t get the chance he got.

“I feel so blessed to have been able to take this step forward. I think it’s time for Hollywood to be more open-minded, more creative and more diverse,” Kotsur says. “Everyone has their story to tell. to tell about.”