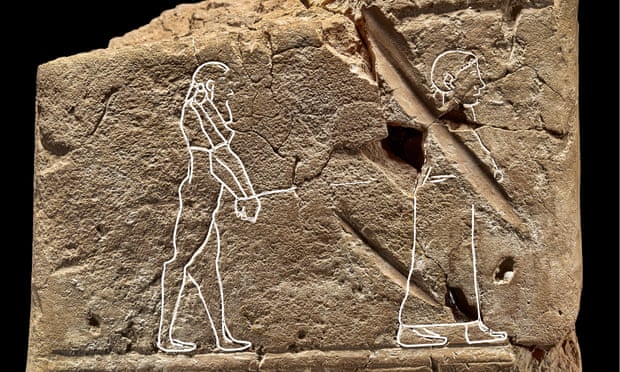 This is the oldest image in the world of a ghost

A curator exploring the dark recesses of the British Museum’s archives recently encountered a ghost, or rather the oldest image in the world, etched on a 3,500-year-old Babylonian clay tablet. The figure of a tall, emaciated spirit, with his hands tied, illustrates the text of an ancient ritual of exorcism intended to banish the kind of ghost who “takes hold of a person and pursues him and cannot be let go”.

Irving Finkel, curator of the Middle East department of the British Museum and specialist in cuneiform, the angular writing system of the ancient Babylonian civilization, recently translated the text of the ritual, which has remained unread and ignored since the British Museum acquired the tablet in the 1800s. At this time, museums across Europe were in a hurry to store Babylonian artifacts, and curators often paid locals to loot clay and stone tablets, as well as others. artefacts, from archaeological sites in present-day Iraq. Most of these articles arrived with little or no background information and ended up in storage.

The ghost tablet, for example, had never been displayed to the public and no one had translated its text. No one had noticed the ghostly image hidden on the back of the clay tablet, either. This side appears empty until seen under a light at the right angle, when the ghost image appears to leap towards the viewer.

In the illustration, a woman in a long robe leads the bound ghost into the afterlife. The ritual depicted on the opposite side of the tablet was aimed at banishing a ghost by soothing the loneliness that kept it tied to the world of the living.

“You can imagine that a tall, thin, bearded ghost hanging around the house pissed off people,” Finkel Recount The Guardianby Dalya Alberge. “The final analysis was that this ghost needed a lover.”

Finkel hopes to exhibit the tablet in the future. He says the ritual of exorcism – and his insights into the types of unfinished business that might keep a mind from resting – reveals how little human nature has changed in the past 3,000 years. It also sheds light on an ancient civilization that is often overlooked.

â€œI want people to know about this culture. Egypt always wins in Hollywood, â€he told Alberge. â€œIf the Babylonian underworld looks like what has been described, then they are still there. So remember it. “

Try this at home

Here’s a rundown of the tablet, just in case you need to banish a Lonely Hearted Ghost this Halloween.

First prepare two figurines: one to represent the ghost and one to represent the partner to whom you are offering it. The lack of real human sacrifice is handy for a house project, but the text assumes you are dealing with a male ghost who would like a female partner. For less heteronormative hauntings, adjust accordingly.

â€œYou dress the man in a day shift and equip him with travel supplies. You wrap the woman in four red clothes and cover her with a purple cloth. You give him a gold brooch. You equip it entirely with a bed, a chair, a rug and a towel; you give him a comb and a bottle â€, according to the text.

Once your miniatures are ready, it’s time to get everything ready for the ritual. â€œAt sunrise, towards the Sun, make the ritual arrangements and set up two carnelian beer jars. You set up a special container and set up a juniper censer with juniper. You draw the curtain like that of the diviner, â€advises the tablet. “You [put] the miniatures with their equipment and set them up.

Now is the time to invoke the Babylonian Sun God, who also moonlighted as a judge of the underworld. â€œSay as follows: Shamash. “

Perhaps the last piece of advice is the most important: â€œDon’t look behind you. “

Is Tiffany dead? Who is the killer?