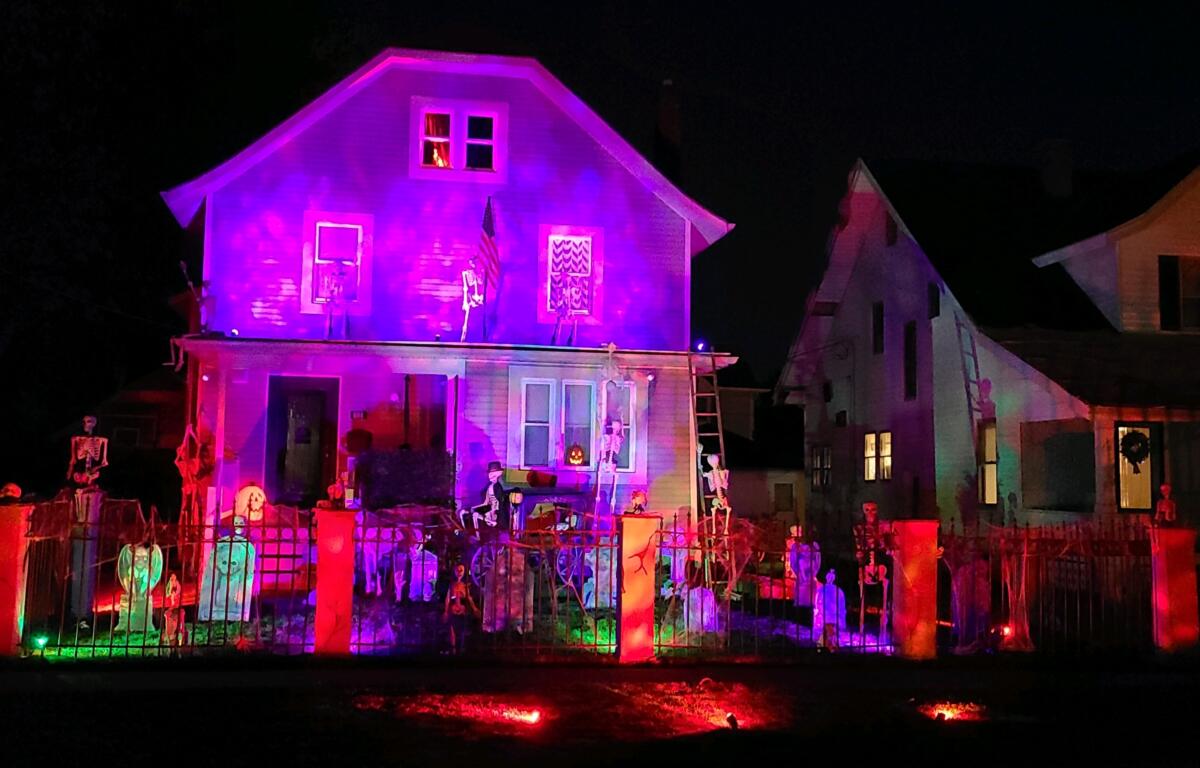 The Bucyrus family is scary this season

BUCYRUS â€” The Chad Durham family don’t have a skeleton in their closet.

They display dozens of bony bodies outside their two-story home at 844 Rogers Street – all part of a haunting Halloween scene that’s sure to be eye-catching during the day and scaring passers-by at night. .

â€œA lot of the neighbors when we first started installing it were like, ‘We were afraid you weren’t doing it this year,’ Chad’s wife Amy said as the art of lawn and LED lights didn’t come on until October. 1. â€œEveryone likes it. They say it looks really cool, and it’s so cool.

The front yard has been converted into a macabre cemetery anchored by a lighted â€œhorse-drawnâ€ hearse and corpse. But the cobweb-covered fence is only temporary – designed by Chad to surround the cemetery and the not-so-friendly souls lurking inside.

â€œWhenever I see things, I just take pictures and have ideas,â€ said Chad, whose children – Natalie, 15, and Owen, eight – are also part of the five-year tradition. â€œDecoration is a family affair. We all do it together. I like to mix the old with the new.

Most of the parts, including the skeleton driving the chariot, are animated, their mouths movable and their flashing red eyes glowing in the dark. A fog machine adds another eerie dimension, while illuminated timers ensure the entire overhanging attraction is lit from 7:00 p.m. to 3:30 a.m.

Inside, the house is just as frightening for first-time visitors who enter at their own risk. The masks of the villain of the film Michael Myers line the living room coat. Spiders that jump at the touch of a button. And life-size animatronics like the talking clown Wacky Mole around the corner.

Amy also added her touch with bloodstained tablecloths made from gauze and fake blood and dining room curtains laden with dark handprints. She also painted porcelain bottles and dolls and applied Mod Podge to used books, perfect accent pieces for the macabre theme.

But Owen, who admits he’s “obsessed” with Halloween, is clearly the catalyst for the annual business that started with a few skeletons. â€œI love Halloween, and it’s fun, and it’s scary, and it’s my favorite vacation,â€ the second-grader said, holding up a pair of Uncle Charlie and Hugz the Clown dolls sold exclusively at Spirit. Halloween.

This year, Chad said, Owen literally sprinted into the parking lot of the seasonal store on opening day, then begged his parents to bring him back week after week. He knows the ‘witchy’ way of scouring the aisles in search of costumes, props, and new animatronics, then whines normally when it’s time to leave.

Owen, who will beg for treats disguised as the character of “Sam” from “Trick’r Treat,” even decorates his room for Halloween, complete with a spooky television, a skeleton bird, and an old movie reel.

He often snuggles up there at night to watch Halloween videos, regardless of the time of year.

Chad even made special trips to Akron and Columbus to collect vintage blow mold ghosts and unique backdrops. He also spent three weeks perfecting this year’s fence project, building four-foot-tall posts of wood and foam board and cutting PVC pipe to resemble the wrought iron railing.

The DIYer, who also hits sales after Halloween, is known for patching up store items with a splash of spray paint. And he’s already planning ideas for next year, like adding a coffin and larger monuments to the cemetery’s growing collection.

â€œYou have to do something different every year,â€ Chad said. â€œI don’t know when it’s going to end, though. I guess when we run out of places to store it.