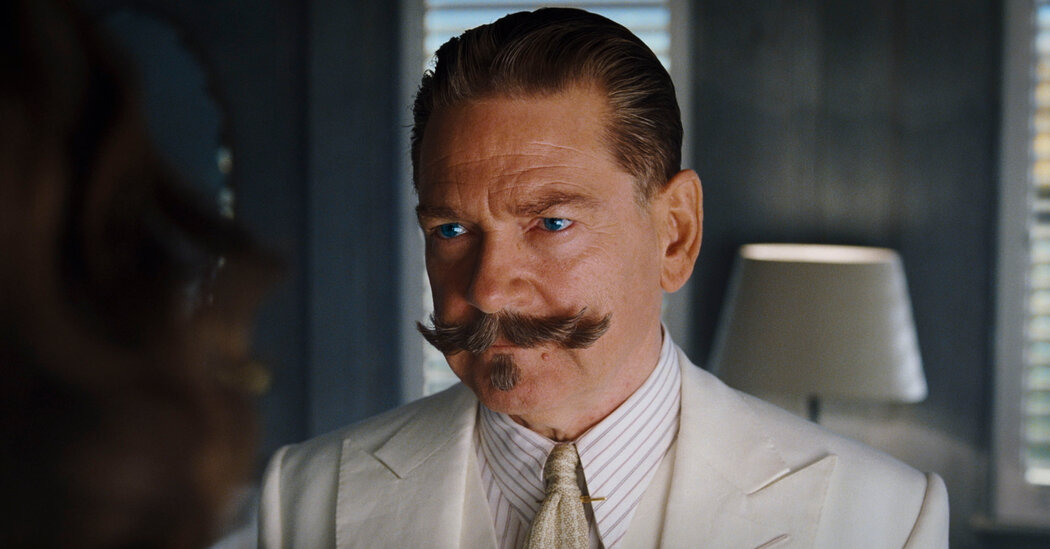 Hercule Poirot is one of those literary heroes, like James Bond or Sherlock Holmes, whose image blazes in the popular imagination. From his debut in Agatha Christie’s 1920 novel, “The Mysterious Affair at Styles”, until his last appearance in “Curtain”, published in 1975, the Belgian detective cut a simple and distinctive figure: a “little quaint, dandified man”, as Christie wrote, “barely over 5ft 4in”, with a head “exactly the shape of an egg”, a “pink-tipped nose” and, in what is probably l he most famous example of facial hair in the history of English literature, a huge “curved-up mustache” – which Christie later boasted about was nothing short of the finest in England.

Christie has written over 80 novels and short stories about Poirot, and nearly all of them have been adapted for film and television. Many actors have stepped into the role over the years, each trying to put their own spin on it, much like a stage actor might take another shot at King Lear. Tony Randall, in Frank Tashlin’s 1965 mystery comedy “The Alphabet Murders,” played it for laughs, exaggerating Poirot’s exotic pomposity with preposterous zeal. On the other hand, Alfred Molina, in a television version of “Murder on the Orient Express” from 2001, brings a more subtle, more subdued touch, softening the sometimes caricatural extravagance of the character. Hugh Laurie even once donned the iconic mustache for a cameo in “Spice World,” leaving Baby Spice (Emma Bunton) off with murder.

But of the dozens of takes on Poirot over the past century, only a handful have truly endured, leaving a permanent mark on the character. These are the interpretations that come to mind when most people think of Hercule Poirot, and in their own way, each of these versions seems somehow definitive. As “Death on the Nile” by Kenneth Branagh arrives in cinemas, a look back at the most famous and esteemed versions.

As young, tall, and (unforgivable) clean-shaven, dashing frontman Austin Trevor was a remarkable – some might say glaring – departure from the source material. He starred in three adaptations of Poirot’s adventures between 1931 and 1934, of which only the last, “Lord Edgware Dies”, survives today (available on YouTube). Trevor’s portrayal, while pleasing in itself, differed enough from Christie’s description that Picturegoer Weekly magazine published an op-ed castigating him, under the headline “Bad Casting”. The most glaring change concerns the nationality of the world famous Belgian: this Poirot has inexplicably become Parisian.

‘Lord Edgware Dies’, based on a novel by Christie known as ‘Thirteen at Dinner’ in the US, is about a wealthy American actress and socialite (Jane Carr) who tasks Poirot with obtaining a divorce from his stubborn husband, Lord Edgware (CV La France). Edgware soon agrees, then finds himself dead; Poirot, intrigued, investigates the murder. Crime films were popular in the early 1930s, and Trevor’s Poirot feels indebted to other charming, good-natured detectives of the time, especially those played by William Powell in films like “The Thin Man” and “The Kennel. Murder Case”. All in all, it’s an adequate if unfaithful rendition, but it’s a relief that Christie’s creation was made later with more fidelity.

Among other virtues, the portrayal of Albert Finney in Sidney Lumet’s “Murder on the Orient Express” (available to stream on Paramount+) is a major feat in makeup and prosthetics: full facial wear encompassing wrinkles, jowls and fake nose, designed to make the slender, 38-year-old Finney look like the world-weary, middle-aged Poirot corpulent. Lumet’s adaptation of one of Christie’s most famous books is a love letter from New Hollywood to the Golden Age, with Finney leading an ensemble that includes luminaries like Ingrid Bergman and Lauren Bacall. A railroad bedroom drama structured around long, loquacious interrogation scenes, it’s an acting showcase of the classic variety. (Incidentally, this is Poirot’s only performance to be nominated for an Oscar.)

Finney’s Poirot is dry and flinty, his clipped accent gruff and his throat gritty. Although he embodies many of the characteristic qualities of the Christie original – cunning, headstrong, picky about his appearance – he is more serious and vehement, and scrutinizes the evidence fiercely, with great intensity, like a carefully circling predator. its prey. The film’s climax is explosive, with Finney recounting his findings on the case in a fit of frenzied fever.

English actor Peter Ustinov has appeared as Poirot half a dozen times, starting with the magnificent 1978’s ‘Death on the Nile’ (which aired on the Criterion Channel). This Poirot is playful, childlike, even a bit whimsical; Ustinov keeps it light and teasing, finding latent amusement in the most devilish subjects. Fans who prefer Ustinov in the role tend to react to his immense warmth: he has a grandfatherly manner that makes him instantly likable, which also smartly belies his intelligence and insight. You kind of expect Finney’s Poirot to get to the bottom of it, but with Ustinov, the sudden, penetrating deductions feel more like a surprise.

Ustinov took on the role so naturally that he continued to play Poirot on screen for another 10 years. ‘Death on the Nile’ was followed in 1982 by ‘Evil Under the Sun’, starring James Mason and based on the novel of the same name, then several made-for-TV movies, including ‘Dead Man’s Folly’ and ‘Murder in Three acts”. Curiously, TV movies have done away with the period setting of earlier feature films, transplanting Ustinov’s Poirot from the 1930s to the present day – a poor fit that finds Poirot visiting places as incongruous as the set of a talk show at times great listening.

“Are you Poirot? a woman asks, dismayed, in the opening minutes of the pilot episode of ‘Agatha Christie’s Poirot’, the ITV series about the detective. “You are not at all what I thought you would be.” David Suchet, the star, shrugs: That’s me. Ironically, for most viewers Suchet is not only Like Poirot, he is synonymous with him. The actor played him on television for nearly 25 years, appearing in 70 episodes, eventually spanning Christie’s entire Poirot corpus, culminating in 2013’s ‘Curtain: Poirot’s Last Case’. Each episode is like a stand-alone film, telling a full story and often running to feature length.

Five movies to watch this winter

Suchet’s interpretation was extremely faithful to Christie’s account. It’s primitive, charming, and lightning-fast; he is conceited but caring, lively but deferential, impeccable in manners and etiquette but, when it comes time to deliver a verdict, utterly ruthless. Over time, however, Suchet’s performance deepened and broadened, giving Poirot new layers of psychological complexity. The show’s later seasons got darker, and Suchet, drawing on his decades-long relationship with the character, seized on the gravity of this story to gripping — and deeply moving — effect.

I find his vision of Poirot, with its palpable depth of feeling, to be the most compelling and richly realized of all.

Christie herself denigrated Albert Finney’s mustache as too insignificant for the great Poirot. At Kenneth Branagh’s tall crescent, she probably wouldn’t have the same objection. This ostentatious facial hair looks fitting for a pair of films — 2017’s ‘Murder on the Orient Express’ and the new ‘Death on the Nile’ — that are supremely lavish in everything from wardrobe to makeup and styling. production design. Branagh made these movies with an eye for scale, and his flamboyant take on the character is well suited to the postcard-perfect views and enhanced by the computer graphics he’s set on.

Branagh’s take on Poirot is certainly more theatrical than many others. He plays the winking, joking detective, with a somewhat silly look — in one of the first scenes of “Murder on the Orient Express”, he walks through the manure — while at the same time giving him a bit of action-movie bravado, allowing him to engage in punches, shootouts, and even the occasional chase. He’s not entirely faithful to the character as written, which some Christie fans found off-putting. But it is clear that Branagh adores this character, and he has tried, in his own way, to make Poirot his own.