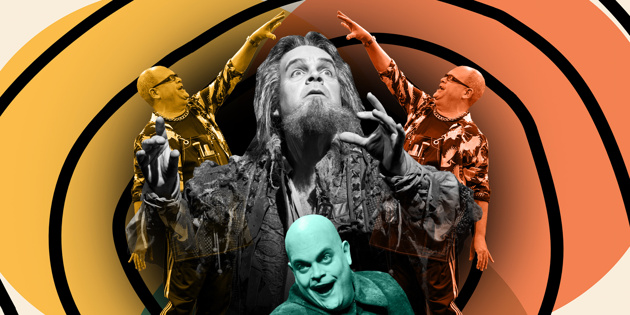 Brad Oscar in “Mrs. Doubtfire”, “Something Rotten!” and “The Addams Family”
(Photos: Joan Marcus/Composite by Ryan Casey for Broadway.com)

With Broadway credits like The Producers, Spamalot, The Addams Family, Something Rotten! and more recently, Mrs. Doubtfire, Brad Oscar is a pillar of the musical. On the last episode of The Broadway Show with Tamsen Fadal, the two-time Tony nominee joined Broadway.com editor Paul Wontorek for a walk through Theater District to visit all of his old Broadway theaters and reminisce about his career.

On Frank Hillard’s role in Mrs. Doubtfire at the Stephen Sondheim Theatre: “What I love is that J. Harrison Ghee and I always appear on stage together. I joke that we do side show because J. and I are never separated throughout the evening, from our dressing room to the stage.”

By playing in The producers and Something rotten! at the St James Theatre: “Ironically, this is the first Broadway house I’ve been in as an audience member. I’ve seen the original production of In the 20th century. The producers was the gift that kept on giving. It was an extraordinary experience. It was amazing. Everyone was waiting The producers to be good. All these people coming together, it was going to be special. nobody knew what Something rotten! has been. So, the audience response to this show was so joyful because they were so surprised and amazed. It was such a celebration of the musical. I thought nothing would ever be great The producers, but, in many ways, it amounted to that.”

In her Broadway debut in Aspects of love at the Broadhurst Theatre: “It was my Broadway debut, so obviously it’s always going to be very special to me. We ran for about a year. I was a swing, so I covered one or two of the leads, and then most of the character men overall. I wanted to be a working actor. My dream was to walk through a stage door eight times a week.

While playing Cookie McGee in good job if you can get it at the Imperial Theater: “It was amazing work because I literally just came in for two months while Tony Award winner Michael McGrath was working on his knee. So I was able to come in for eight weeks and play with Matthew Broderick again, my dear friend from The producers.”

While playing Uncle Fester in The Addams Family at the Lunt-Fontanne Theater: “I had a ball. You play this character that so many people know and love. That curtain went up and that audience met you halfway.”

Watch the video below and head here to check your local listings for The Broadway Show. Hosted by Emmy-winning presenter Tamsen Fadal, it is the only nationally broadcast weekly theatrical current affairs program.