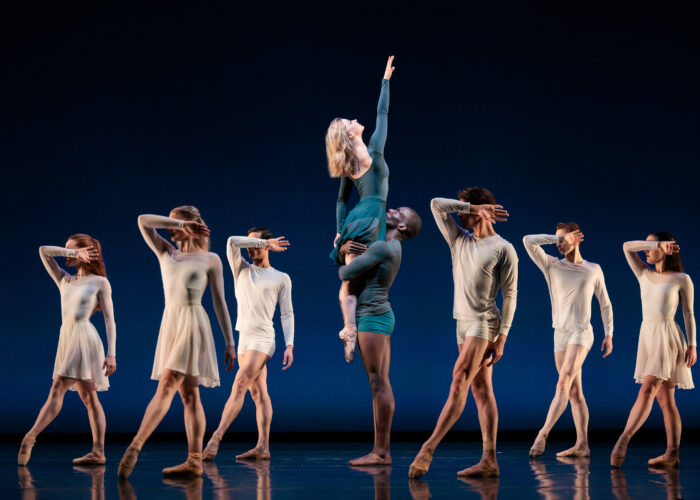 In a dynamic program that unfolds choreographic inspiration and clever design on a company of dancers who are constantly seeking and finding more, Smuin Contemporary Ballet raises the curtain on its 28th season in splendid fashion. Bill’s clunky title, “Dance Series 2: PS Forever Smuin,” is about the only thing that lacks grace, power, and finesse.

The production, presented on Saturday morning, April 30 at the Yerba Buena Center for the Arts, is a rewarding mix of new and not-so-old. Newness comes first, in a pair of short but assured world premieres by ensemble members Tessa Barbour and Brennan Wall. Val Caniparoli’s “Confessions” (known as “If I Were a Sushi Roll” when it premiered in 2018) follows the first intermission, while Amy Seiwert’s masterful and moving “Renaissance” (2019) complete two generous hours of dancing.

Barbour’s supple “Vignettes” are anything but episodic. The softly smooth room opens into a pool of color – the emerald, sunset red and sea blue-green of the dresses worn by three seated women as the curtain rises. The women get up fairly quickly too, joined by three attentive male partners. All is softness and light as a calm but subtly animated melody by Tchaikovsky, arranged for violin and piano, seems to lift the dancers to their finer, purer selves.

Their steps linked reactively to the music – the women mounted on pointe, the men gently supported and lifted their companions – the three couples exude a sunny feeling of well-being. Not a head is bowed nor a smile broken. With a small chosen gesture, one of the women frees her partner to dance alone. After a hair-raising midsection, the Edenic ease resumes.

The spiral force of the couple drives Wall’s “Untwine”. A couple dressed in black set the engine of the work in motion with a tense, swirling pas de deux (danced with thrilling impulse by Cassidy Isaacson and Brandon Alexander on Saturday). Three other couples, dressed in white, feel a little hesitant and studied as they arrive on stage and seem to mimic the original couple, as if a cloud in Vivaldi’s arrangement of “Summer” had passed over their heads. .

But after chastely covering their eyes for a while, the newcomers catch fire and take on their own gyroscopic speed and accuracy. The women’s long hair flies freely against deep washes of ground color (lighting by Michael Oesch). Everything is unleashed and simultaneously, powerfully contained by the swirling movements of the dancers.

Caniparoli’s “Confessions” draw a corner of a funny dance image in nine chapters with whimsical names (“Sick of Fish”, “Nowhereseville”, “Dog and Frog”). Set to music by American composer Nico Muhly and lyrics by the mononomial Teitur, the piece transforms the company into frenetic human pixels, all clad in faded black and charged with futile, flickering energy. The work splits into riffs on sushi, Jane Fonda, coffee and prancing dogs, complete with illustrated cartoon panels (directed by Douglas Schmidt). A fake surveillance camera monitors all this from above.

When it opened under its title “Sushi Roll” in 2018, the piece was a caffeinated jolt of comedic outlook and choreographic verve. Four years later, titled Darker Confessions, the work remains a technical feat, vividly performed, but landing from a different angle. In the closing “Small Spaces”, the sight of a nearly naked man (the magnetic Maxwell Simoes) squeezing himself into a tiny box gives the impression that he has the biting pandemic hue of a quarantine.

Seiwert’s “Renaissance” projects the look of a classic. Tunics, three giant textured pillars, and the many-voiced singing of the Kitka Women’s Vocal Ensemble form the framework of the study. The dancers fill it with the seven powerful and moving dances that Seiwert has created for them.

The women lead with common musculature, coming together in tight but flowing formations built with forward thighs, proud shoulders and angular elbows and ankles. Men join roles that shift from equal participants to supporting functions. There are exquisite solo tricks and gorgeous duos; in one, a departing lover is blessed by the arms of another woman.

In “Cradle Song”, the men become a wave force carrying a statue-like statue (the elegant Tess Lane) forward and then across a human bridge. When the other women join her later, “Renaissance” expands her brilliantly shining circle.

North Star Theater back in the spotlight with historic $1.7 million renovation | A Tammany

Nostalgic Milford restaurant has ‘the vibe, the aura, the food’ to succeed