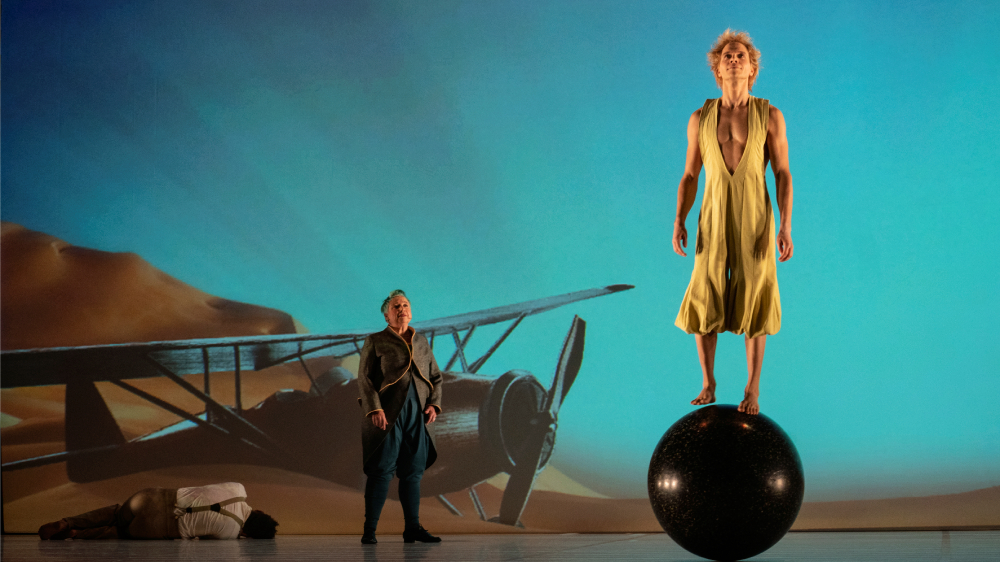 Review of “The Little Prince”: an unequal show on Broadway

When is a timeless children’s tale not quite suitable for children’s theatre? When it comes to Antoine de Saint-Exupéry’s beloved and slightly surreal short story from 1942, “The Little Prince.” Published after France was liberated in World War II, the story of the French aristocrat-turned-military aviator has always been a nebulous, grown-up dreamscape in which a young, disheveled prince travels through space. , lands on various planets (including Earth) and quietly tackles topics as nuanced as love and as raw as our loss of humanity and the earth’s natural resources.

“The Little Prince” is a beautiful, delicate story. But now try to imagine your child sitting on it with sweet quietude.

Enter Anne Tournié. Directed and choreographed by Tournié – a mainstream avant-garde renowned for his acrobatic and world-class dance-theater escapades of Cirque du Soleil – and featuring a playful international cast, “The Little Prince” at the Broadway Theater was surely destined to energetically opening up its beautiful dialogue to include children of all ages.

But not so fast. Tournié’s “Little Prince” is endowed with the same Franco-international flair that she gave to “event” productions such as “Franco Dragone: Le Rêve” in Las Vegas and “The House of Dancing Water” in Macao.

That means a soundtrack of highly layered acousto-electric music inspired by Astor Piazzolla’s searing crooked tango and Laurie Anderson’s chilling experimental fuzak. (Chris Mouron, as the narrator of “Prince,” even has an Anderson-like singing cadence in his voice.)

This means that the interplanetary journeys of “The Little Prince” unfold via chic video projections without being too stripped down, and allow characters such as The Lamplighter (Marcin Janiak) to soar through the endless night skies or the desert shores gracefully.

That means aerialists swooping through the air, movement artists gliding along the stage, and multinational dancers undulating as one.

All while telling the autobiographical and allegorical story of a man who fell to the ground (Saint-Exupéry was stranded in the Sahara after the crash of his plane), of a precocious boy who dreamed of flying and looked towards all that is bon (Saint-Exupéry as a child, although some postulate that the character could be Christ), and a teasing muse, Rose (believed to be inspired by Saint-Exupéry’s wife).

Whether you’re an adult or a kid (and during my Saturday matinee preview, the Broadway theater was packed with kids), much of this amorphous action is messy, confusing, and slow in the first act. It’s strange, for example, that the prince, nothing more than a child in the book, is represented by a muscular man-child (Lionel Zalachas) with golden hair. For all his ball-balancing skills and wondering, wondering looks, he behaves like Harpo Marx.

While the Aviator (Aurélien Bednarek) and the Rose (an exquisite Laurisse Sulty) are closer to the original tale’s poignant take on its time (and what St. Exupéry), other characters come and go too quickly to appreciate their goals, especially when ill-suited to current contexts. There’s a Vain Man (Antony Cesar) snapping selfies and smiling at the Joker, an overly frantic, primary-colored businessman (Adrien Picaut), and a big-haired drunk (Marie Menuge), all of which make the storyline more complicated when combined with the Narrator’s slow-rolling, cutesy, refrigerator-loving poetics. (The narrator Mouron is also the librettist and co-director.)

Along with all of this, the aerial dance sequences in the first half of “The Little Prince” are sadly boring – certainly beautiful, but also boring. When a recording artist like Pink can create entire concert tours based on her own athletic use of aerial acrobatics, it’s an art form that needs to step up her game.

And yet, for all the fuzziness, false modernity, senseless bluster and awkwardness of the first half of “The Little Prince”, the second half is brilliant, better paced, true to tradition without giving up its dreamy, twisted qualities. to the future. It never presents itself as a hodgepodge of influences.

With far less aerial work than the first half, the few moments in act two that use uplifts are special, spectral and haunting – there’s even a death-defying bit that comes after the curtain call, like a Marvel post-credits scene. The artist-actors also seem freer in the second half, as they use a more classically-inspired brand of dance (with just a bit of Twyla Tharp-style choreography) in their portrayal of the Serpent (Srilata Ray) or the Fox ( Dylan Baron).

Either way, their movements are focused and elegantly refined, and a second-act dance in which the male performers are androgynously dressed is particularly powerful and inventive. Even composer Terry Truck’s score is less talkative, more tonal and truly mature with passages of contemporary music tied to what’s happening on stage.

For all the frenzy and verbosity of the first half, the calmer second half of “The Little Prince” is more radically poetic, experimental and adventurous, genuinely engaging – for children and adults alike.