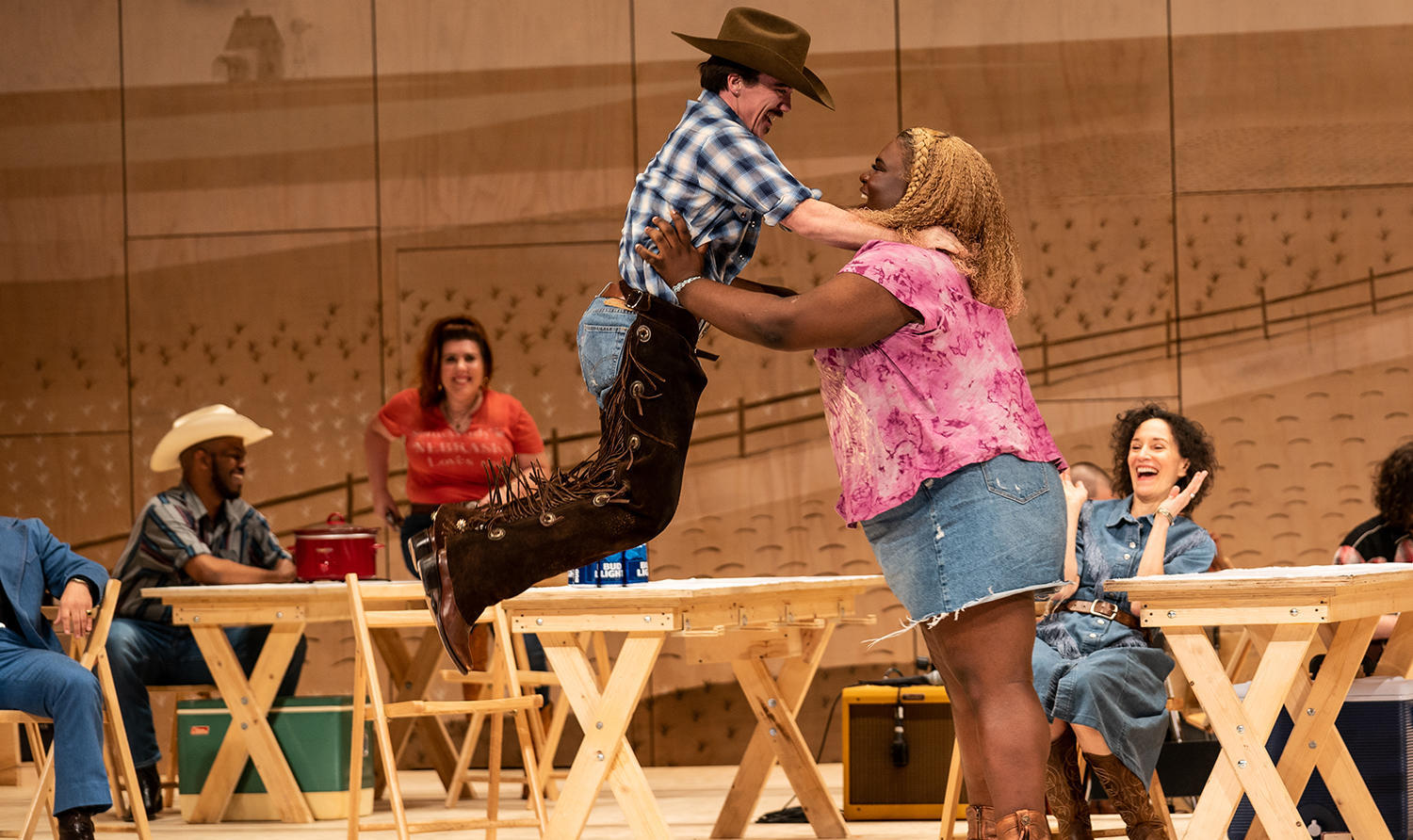 Oklahoma! at the Forrest Theater

Forgive me Dionysus, for I have sinned: it was the first time I looked Oklahoma!. Any Oklahoma! Not even a charming, misguided high school production. No klahomas.

I find myself in a permanent conundrum with Golden Age musicals, and I’m not alone in this debate: is it worth dwelling on outdated material to get to what it can? show us today? Especially for audience members in marginalized communities, the risk of seeing the oppression continue unchallenged through song and dance often outweighs the joy of seeing yet another love triangle story. Watching this production, however, I was surprised to discover that the original text (which this revival retains in its entirety) does not tell of a conventional love triangle. Instead, it tells the story of the burden placed on women to assess and bear the danger of refusing a man. I can’t imagine any production of this show bringing that fact to the fore the way this tour does so effectively.

Laurey, played stunningly by Sasha Hutchings, must choose between suitors Curly and Jud, though it’s clear to her and the town that she only considers Jud because she’s afraid of what he will do. if she says no. In the end, Laurey’s conflict is not between two hopeful husbands, but between what she wants and what will protect her. This dilemma is accentuated by daring lighting choices, including moments in total darkness, the dramatic chaos of Act 2’s opening dream ballet (my jaw dropped watching Gabrielle Hamilton perform it) and the casting of a masterfully imminent Christopher Bannow as Jud. Unfortunately, Laurey’s choice is one that many women face. Domestic violence and toxic masculinity haven’t gone away since the days of Rodgers & Hammerstein, and have worsened in many ways with online subcultures such as “incel” encouraging men to get what they want. want by any means necessary, including violence. How can you tell which refusal you give, no matter how well worded, will become dangerous?

The walls of the set serve as Chekhov’s most ambitious collection with a total of 114 guns. This staggering display is one that started conversations before the first note was played; just before the curtain, I heard a discussion between two other spectators about the first time they had fired a gun. Certainly not a standard pre-show conversation, but a stark reminder that gun violence is a normalized foundation of both the world of Oklahoma! and our society today. the Oklahoma! The team donated a minimum of $100 per gun to Gun Neutral, an initiative calling for greater social responsibility surrounding the depiction of gun violence in entertainment.

Shall I give the ironic title “Woke-lahoma” that the internet has so often given to this production? That would be a reductive assessment for me to make, classifying an entire work through what I perceive as a white person as “fairly progressive.” The most contrary evidence is that, keeping the original text 100%, the g-slur used against Roma still made the difference. That said, the production gracefully walks a tightrope on the original text’s more old-fashioned humor about women and relationships without reverting to misogyny, thanks in large part to the actors’ clever delivery.

As a transgender theater performer and audience member, this is a rare theater outing that I get to watch not one but of them transgender performers on stage, let alone a couple in love and not the punchline of bigoted jokes. See Sis, who plays Teen Annie with glowing enthusiasm, belts out the line “How can I be what I’m not?” and falling in love with Will Parker (Hennessy Winkler had me cracking up several times with her performance) was a breath of fresh air at a time when Broadway seems to insist on churning out transphobic narratives relentlessly.

Aside from all the heavy stuff on this tour, watching this show was pure and absolute pleasure. From the stellar work of the set to an area of ​​corn splatter and Bud Light (yeah, you read that right), this was a show I would absolutely watch again despite my previous doubts about the original text. If you’re hesitant to try your hand at an older show, I encourage you to give the Oklahoma! one turn. If you’ve seen other productions and feel like you’re missing yet another version of the same story, I can assure you that this isn’t just another version. While Twitter has been buzzing since the Broadway revival began in 2019, it’s not your grandparents’ Oklahoma!and you’ll walk out of the Forrest Theater with a new perspective on a toe-tapping classic.

Oklahoma! is running through March 20, 2022. Tickets can be purchased by calling 212-239-6200, visiting www.telecharge.com, or in person at the Academy of Music box office daily from 10 a.m. to 6 p.m. . All audience members must show proof of vaccination with valid photo ID and must remain masked while at the Forrest Theater.