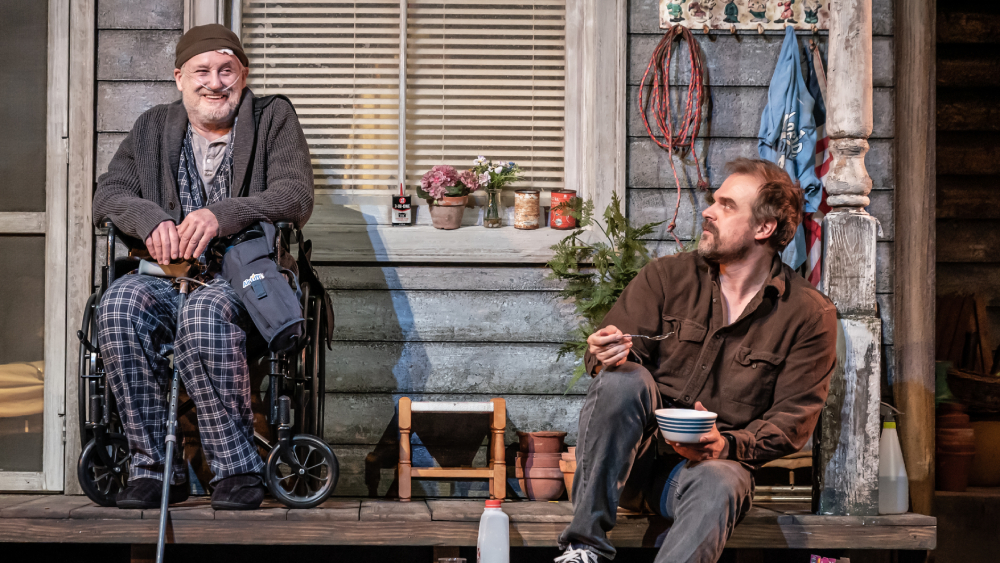 Jessica Lange was once asked if there couldn’t be someone on the set of the painfully overwrought Southern goth flick, Beth Henley’s “Crimes of the Heart,” who might have gotten everyone to tone down the things, to which she laughed, “You mean, like the Taste Patrol?” Large parts of Theresa Rebeck’s wildly dysfunctional new family drama, “Mad House,” now airing in the West End, suggest the Patrol was also reported missing.

You can see why actors of the caliber of David Harbor and Bill Pullman – along with equally gifted British talents Akiya Henry and Sinéad Matthews – wanted to appear in this world premiere. Rebeck has barely been produced in the UK, but it’s immediately clear that she knows how to whip up bitterly comedic sets for actors to bite their teeth into. But she came up with a handful of juicy, clever roles rather than having them adhere to anything with real resonance beyond the melodramatic twists and turns of a second-hand family plot.

With three siblings fighting for a home and their inheritance as the infuriating patriarch slides down, the setup goes back to “King Lear”. Here he is relocated to a crumbling family home in the middle of not quite nowhere on a property that, of course, is proving ripe for redevelopment – a fact conveniently unnoticed by its current inhabitants. We are, in other words, in this staple of American theater: the family at war with itself, while everyone yells at each other with salty words even more than, forgive me the pun, acts. But while Tracy Letts’ “August: Osage County” took that structure, added metaphor, and created a tangy evening of Kentucky Fried Chekhov, Rebeck just piles on incidents and revelations driven mostly by hidden information.

The contrived last-minute appearance of a bean-spilling letter about past and present relationships echoes Arthur Miller’s “All My Sons” which, coincidentally, recently appeared in London with Pullman in the lead. Given that his typical cast is benign — he plays so well that even Meg Ryan ditches him in “Sleepless in Seattle” — he had to jump at the chance to play the epically selfish bastard that is Daniel, father of Harbour’s well chaotic, long- Michaël suffers. It’s like watching a tyrannical character in a Martin McDonagh play, and watching Pullman savor his character’s cruelty is almost as guilty a pleasure.

In Moritz Von Stuelpnagel’s painstakingly naturalistic production, the two don’t drive each other so quietly mad. Breathless and almost constantly angry at the impossibility of living with his infuriating and rude father, Michael hires Lillian (wonderfully unfazed Henry), a hospice nurse from St. Vincent and the Grenadines. His skin color alone initially stirs up all of Daniel’s racism, but under threat from Michael, he’s cunning enough to hold back his point of view in exchange for rants of ridiculous remarks about gender identity – albeit in more than indicating her malice, Rebeck’s purpose in using this particular grievance is unclear.

Not only does the sharp-eyed Lillian ease the mood, but she’s there to bring out Michael’s pain and his own story as we learn that eleven months ago he left the “insane asylum”. Just then, Michael’s lanky, striking brother, Nedward (the impatient Stephen Wight), appears. Rebeck further heightens the atmosphere with the surprising arrival (not in a good way) of a drunk Michael returning home with two prostitutes. The darkly comic tone now reaching deliberate absurdity, Rebeck then combines the physical collapse of the father with the sudden and (too) perfectly timed arrival of the wonderfully grating Matthews as Pam, Michael’s ruthlessly pragmatic sister. Cue: Instant curtain of the first act.

Inevitably, in the second act of long travel days into the night, with the sleepless family taking turns coming to the back of Frankie Bradshaw’s set, everyone proceeds to open up and/or blame the game. . Because the game is so strong, especially from Henry and Matthews – who both radiate intensity, the former in shimmering forgiveness, the latter in rancid resentment – ​​family woes seem, instant in an instant, add up. But the absence of a controlling vision, beyond everyone’s incomprehension, is made manifest by the end of the blackout which leaves the public uncertain of applauding. The action does not complete successfully; it just stops.

There is, of course, nothing wrong with choosing high-stakes melodrama as your form. But when the second half is determined to examine everything from sanity and self-protection to scarred childhoods and assisted death, the plot twists become more and more shocking and the form becomes more and more war with content. Despite the light touch of the hard-working cast, the room’s over-bloated highs and lows are like eating a meal of sugary food: it gives a rush, but leaves you unsatisfied.