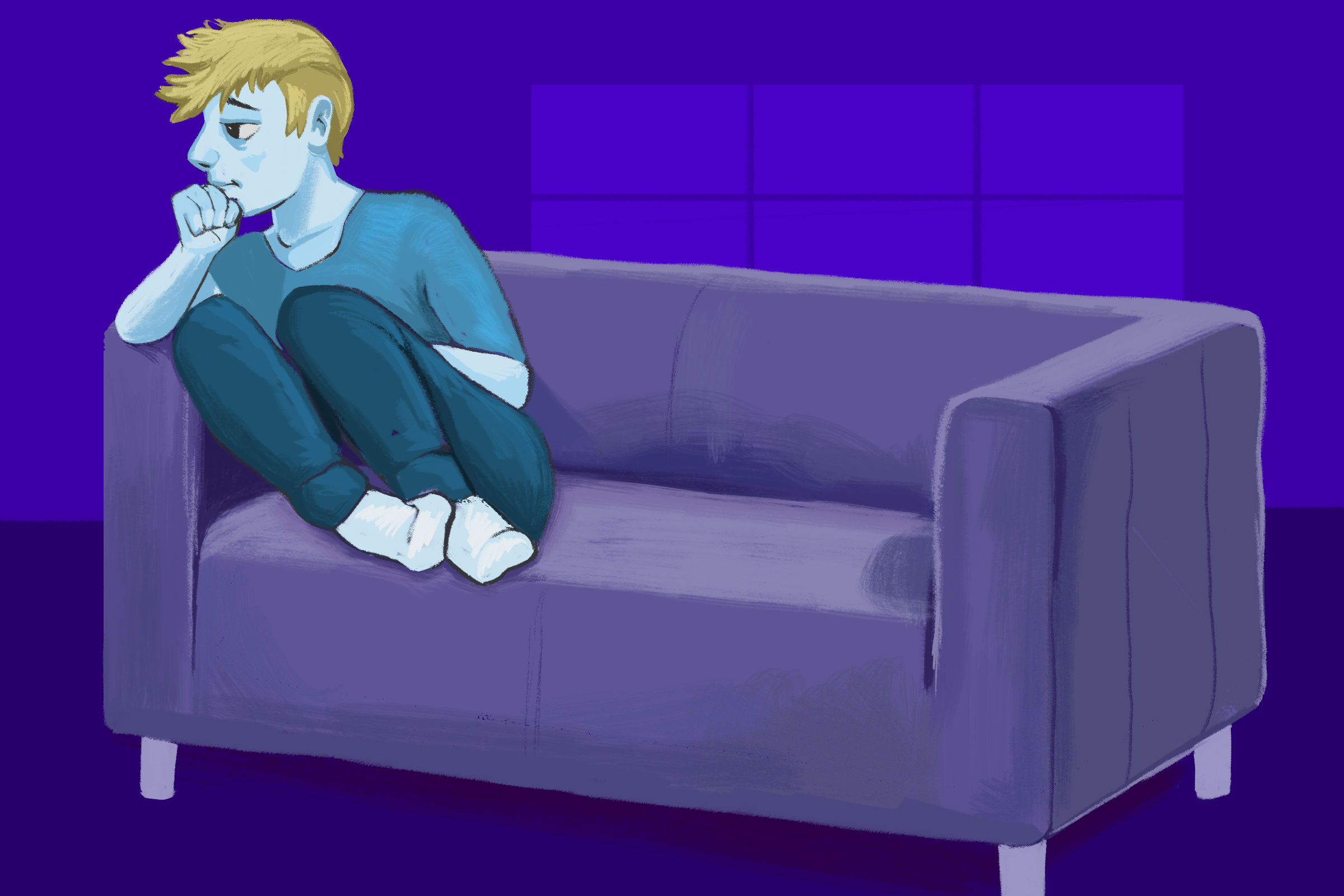 KLIPPAN for one: Sitting alone at IKEA

Over a year ago, in early November, I cycled to the IKEA furniture showroom in Canton, Michigan. I left around mid-morning and arrived at my destination around noon. After biking the two-lane roads and suburban gates that connected me to the blue-and-yellow giant, I locked my bike to the post of a traffic sign and rode inside. I walked up the escalator and touched the first pouf in my line of sight with my hand, sitting on it as if it were my home.

I had reason to act so comfortably in this particular IKEA; I’ve been to Canton at least once a year since my family moved to Michigan when I was five. And before that, we were frequent visitors to the showroom near the airport in Newark, New Jersey. As my mother helped me and my younger brother dip bites of Swedish meatballs from the store’s cafe into hot sauce, we watched planes take off and land on the adjacent runways. We have studied people lifting their new flat-packed KALLAX shelves and placing them in the trunk of their car.

The multidimensional liveliness of an IKEA store attracts hundreds of families like ours, who make a day trip without buying a bedside table. Multiply that by hundreds of places around the world – millions of people, eating meatballs drenched in gravy, carrying flat boxes from stripped shelves, putting them in the back of their automobiles.

I discovered that people who go to IKEA do so in groups: groups of friends, nuclear families, a father with his daughter, a mother with her student. Almost everyone who ventures down the escalator into the furniture-filled showroom is connected to someone else. The invisible threads of their networks are highlighted by distant hand gestures and eye contact or the calling of a first name. They may watch a close friend sit down on a sofa and then stand up, as if making sure they are performing the action correctly.

When I go to IKEA with my family, we have a similar network. My parents, armed with the names of European items in capital letters on tiny slips of paper, scribble notes with the store’s free tiny crayons. Sometimes my mother carries a clipboard with a black and white printout of the item we are looking for. My brother and I take on the roles of avid furniture explorers, searching for geometric shower curtains, drawing attention to a sofa that’s better than the one we have at home, opening the sliding doors of a model wardrobe, admiring expandable hangers and shelf lighting that brightens our eyes to the organization possibilities of the home. In a section inspired by an urban condo, we pull straps and levers on sofas that miraculously transform them into queen-size beds and fold and unfold the miniature dining table that allowed this faux apartment to squeeze three rooms together. only one.

When our demonstrations of the latest in armchair design became too obsessive, our parents moved on to media storage and desks, their invisible strings taking us with them. We were enthusiasts, my parents were pragmatists.

As my brother and I got older and visits to IKEA became more routine, our roles while wandering the maze of household items became a new normal. Our parents got more hands-on, browsing the showroom to identify a specific item before quickly perusing Marketplace (the soft goods section) and checking out.

My brother, Hector, also became more efficient, often only trying two or three sectionals compared to the usual dozen or more. When I broke training and inspected the various handles of a shiny new line of kitchen cabinets, my parents pressed me with the justification for frivolous delays, like going to an art museum or reuniting with our cousins, as if something was more important than the latest SEKTION Kitchen System in a modern grey-green. My family kept me from becoming an expert in Scandinavian design – as if there was anything more culturally relevant in Southeast Michigan.

Imagine then, the freedom of the wind rustling through my hair, the sun rising in the east, the tires of my bicycle roaring along the asphalt shoulder, past golf courses and farms, gas stations and housing estates – a solo trek to the Scandinavian star of interior design. Freed from the practicality of my parents and the unfair compromise of a centuries-old family tradition, I promised myself a day to fully indulge in all the pitfalls of IKEA Canton.

After touching my hand to that initial ottoman and searching the rest of the model living room for signs of clever design, I found myself in the sofa area of ​​the store, hoping to start my solo ride on a comfortable note. I bent my legs and dropped my back into the basic neutral tones of a KLIPPAN sofa, mentally making notes on its level of firmness, armrest height, and vertical support.

After completing this analysis, I looked around, realizing that I had no one to report to. With the critical discussion of reconciling sofa leisure differences absent among a group of ones, I moved on to the next, and the next; the movement of sitting on cushions quickly becomes mechanical and tedious. I forced myself to try the elegant SÖDERHAMN and the welcoming HÄRLANDA, knowing that I had spent a whole morning cycling in search of this luxury.

When I was too scared of embarrassment to test other loveseats, I kept my hands busy in the kitchen section opening and closing drawers, then pretending to wash a dish and use the drying rack. on my new quartz counter. I ran my hands over the YPPERLIG wood-grain dining table and once again assessed the comfort of my seat, this time in molded gray plastic.

I looked around the room trying to catch all the details my parents would normally rush at me: the woven wooden chandelier, the whimsical blue walls, the shimmer of a metallic centerpiece. What attracted the most attention, however, were the other chairs around me. They were empty, and it was in this fake dining room that the weight of being alone at IKEA settled.

Along the slow, meandering path that guides through the display area, I now moved with a new degree of self-awareness. I kept my arms closer to me, careful not to get too close to the other shoppers to avoid infecting them with my clumsiness. I stopped bouncing in the POÄNG chair once an elderly couple passed by and refrained from lying on the colorful floral sheets above the MALM bed frame for fear of being perceived as strange, or worse: lonely.

To be fair, I have seen other unaccompanied people on their respective IKEA tours. A young man, maybe in his twenties, lingered around the chairs while I rummaged through the sofas. I glanced at them, hoping to say that I wasn’t alone in my loneliness. Our paths crossed at times as we practiced a similar showroom pace, but they quickly got lost in the majority; couples, trios and conglomerates of six invaded my vision.

Part of the reason I felt increasingly uncomfortable wandering the Michigan branch of this Swedish staple alone is obvious: everyone was in groups, loosely bound by the laws of eye contact. and soft cries on the EKBACKEN counters, and I was not. Looking at your own reflection in a LASSBYN mirror is much easier when there are others you know outside the scene; at hand.

I felt like I had no good reason to be there. I wasn’t buying a new bed for my college room or designing a kitchen remodel. I existed just above the colorful rugs, floating among the sectionals and the grab handles of the cupboards. I had come here for a ride, to enhance the family tradition through self-singularity. I felt that I had failed; the intimidation of the social space that crushes me solo. I comforted myself with a pale green smoothie and two chocolate bars from IKEA Food before returning to the dark world that characterizes post-PÄRUP melancholy.

Since that experience, I have returned to IKEA several times, mostly with family members. It’s harder for all of us to get together now, so I go with my mom to buy a holiday present for my brother, or maybe when my dad needs a cabinet replacement for the bathroom in the basement. The tradition is kept alive through fragments, as they are.

A year later, however, on another hot November weekend, I traced my tire tracks back to the asphalt fields of Canton. I walked up the escalator and touched my hand to the first pouf in my line of sight, sitting on it to establish my presence. I was always aware of my outcast status, but the familiarity of that feeling softened the sharp social pains into relatively dull, infrequent thoughts.

The multi-seat KLIPPAN always alienated me, but I found solace in a yellow STRANDMON chair; its level of firmness, armrest height and vertical support create a new cozy niche for an evening alone together.

Statement columnist Oscar Nollette-Patulski can be reached at [email protected].

Theater review: ‘The Simon & Garfunkel Story’ at the National Theater had you humming all the way back