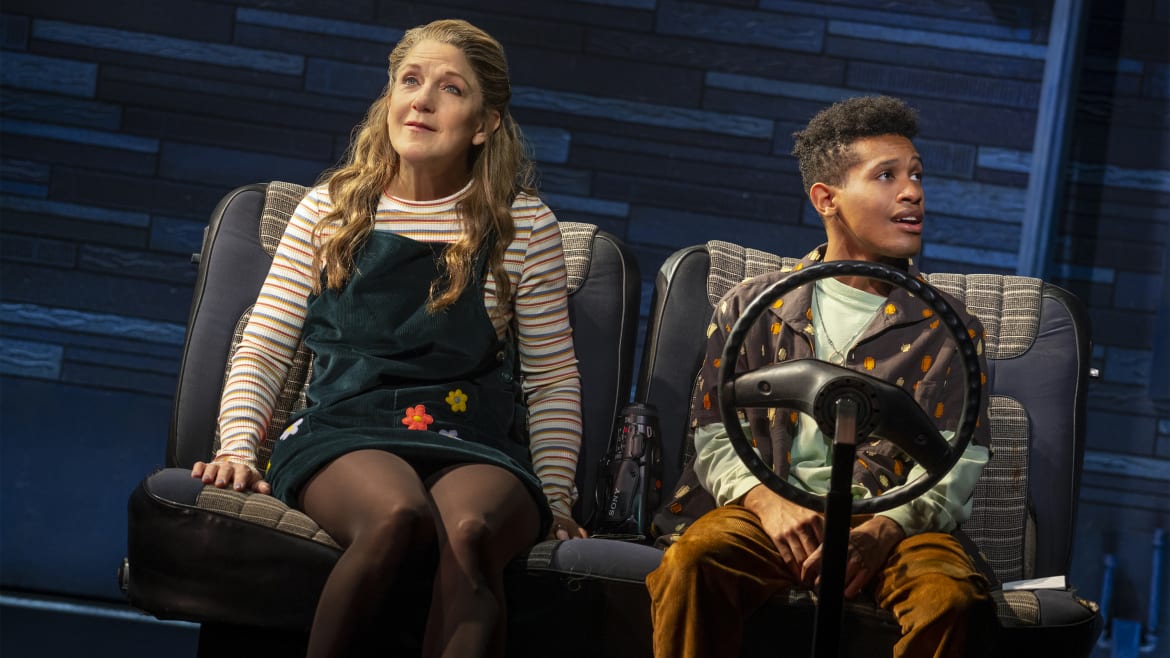 It was strange going out for a breath of fresh air at intermission during Kimberly Akimbo (Booth Theatre, booking until April 23, 2023), only to realize that my face had been creased in a constant smile since the curtain went up. Sometimes, many times, that smile had turned into laughter, because this Broadway musical based on David Lindsay-Abaire’s play of the same name is extremely funny.

And even when this musical, transferred from a successful off-Broadway run at the Atlantic Theater, isn’t funny — because Lindsay-Abaire’s book and lyrics also come with piercing, meaningful hits — there’s has something about Kimberly Akimbothe execution of which seems elastic and light at its heart. Under the assured direction of Jessica Stone and the smart, layered music of Jeanine Tesori, it’s a delight, the most outstanding new Broadway musical of the season so far.

‘Almost Famous’ on Broadway is a rock ‘n’ roll nightmare

This reviewer was not so thrilled with the spectacle on the Atlantic stage; on this big stage, he was completely conquered. It is difficult to single out a single performer; they are all, major and minor roles, exceptional – and the songs and drama give many pearls to perform for every actor on stage.

At first, we don’t know why Kimberly (Victoria Clark) is at the rink with a group of kids somewhere in Bergen County, New Jersey, but it quickly becomes apparent that what looks like an older woman in front of us has a rare genetic condition that rapidly aged his body to four times his actual age. She really is 16, but looks and physically looks 72. We learn that the average life expectancy for someone with her condition is 16 years. Times are not on Kimberly’s side.

The second name in the show’s title comes from an anagram of the show’s hero, tuba-loving high school student Seth (Justin Cooley), made from his name. He’s a bit of akimbo too, a hard-working teenager, a proud nerd, dryly comedic and, despite his youth, eager to help Kim achieve her dreams of going on a road trip. Sixty-something Clark and teenage Cooley hone the best kind of chemistry on stage — a kind of chaste, platonic and yes, also sweetly romantic connection rooted in respect, humor and a shared sense of difference. We cheer them on as a couple as they figure out what “couple” might mean in these strange circumstances.

Kimberly Akimbo does not simplify any of its characters; each is sharply, individually drawn and played. Her classmates on the show aren’t mean and cruel to Kim; they do not understand what she is suffering from but do not persecute her for it. They are just as “akimbo” as her. “It’s Saturday night in Buttcrack Township, on a road with no signs,” they sing at the rink. Aaron (Michael Iskander) has a crush on Delia (Olivia Elease Hardy) who has a crush on Teresa (Nina White) who has a crush on Martin (Fernell Hogan) who has a crush on Aaron.

You feel for every character on stage, just as they can also be maddening, insensitive, stupid, sweet, and sweary at times. At home, Dad Buddy (Steven Boyer) drinks heavily, and Kim has practiced lying for him in exasperation, even though he picks her up more than two hours late (“Just say car trouble, and I’m taking you to Six Flags”). Pregnant mom Pattie (Alli Mauzey), seedy with everyone, seedy with the world, sings a lullaby that was injected with bitter truth serum into an unborn child via video camera. Swear words and vicious verbal daisy-cutter hiss through the living room (“Aspirations? I haven’t had any since high school”).

And then – a Broadway star is born – Aunt Debra (Bonnie Milligan) lands, a former convict to work her next crook, dragging dangerous canisters of chemicals in her wake. Milligan is a storm of profanity, comedic timing, withered side-eye, and singing firepower (on Twitter, she is aptly named “Belting Bonnie”). Of a former partner, Deb sings: “He was Greek. / Maybe he was gay. / He needed a green card. / I needed money. / We got married in Passaic last May. The split-second moment Deb sorts through the quartet of hidden teenage passions is the best comedy outburst on a Broadway stage right now.

Deb has a plan for herself and the kids – another great song unfolds as their crime plan takes shape. There are also family secrets about to be revealed, but it’s mostly a family that’s hurting, and their pain centers on fear of Kim’s condition – and the axis of loud and quiet resentments. that bloomed around her. As Kim, who is fed up with their lack of parents, sings, “I was never the girl you wanted. That’s the thing we never say. / But it’s the truth, and that’s fine.

Kim wants to get the most out of life, but she’s surrounded by two parents who siphon joy, who don’t recognize her as needing to live, even though they also want to break free from their own demons. The trauma has frozen each family member differently, and Kim no longer wants to feel the crippling effects: “I want to walk on stilts!/I want to bungee jump. In Sweden./I want to go to China. And New Zealand. And Saint-Louis./I want a jetski!/I want a piranha! she sings, in a song that also wishes for a “simple, homemade meal”.

David Zinn’s design is simple and stunning whether at home, at school or at the rink, while Danny Mefford’s choreography blends styles with as much humor as the script. The small scenes, the asides, are as well observed as the more complex scenes; When children have to choose a disease to talk about in biology class, Martin explains: “Scurvy. We’re pretty excited about it. And even though Seth jumps up at first when he talks about his illness, Kim sees someone as eccentric as she is.

In a cute song sung while she, Seth, and Buddy are in the car, her father feels fiercely protective of her. But Kim wants out, and what she will do, the power she will claim for herself, the destiny she chooses to reach, forms the encouraging and final part of the musical until a final sequence that you might find yourself both laughing and sniffling along. “It makes you laugh, it makes you cry” may be a cultural cliché, but it’s also – in the best possible way – achieved through the winning heat, courage and quick wit of Kimberly Akimbo.

Learn more about The Daily Beast.

Get the Daily Beast’s biggest scoops and scandals straight to your inbox. Register now.