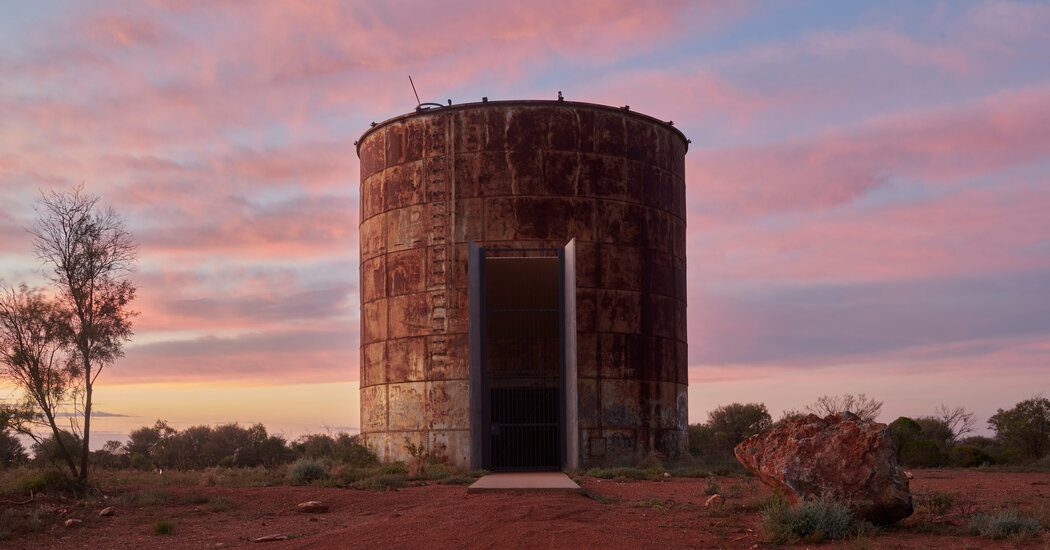 In the Australian Outback, the Cobar Sound Chapel quenches the soul

Life in Cobar was a delicate thing until the arrival of the Silver Tank. In the vast, red-dirt the hinterland of Australia, more than 400 miles northwest of the Sydney coast, rainwater is scarce. For thousands of years, the nomadic Ngiyampaa Aboriginal people have excelled in the art of survival by creating natural rock reservoirs. But after European settlers discovered copper and gold in the area in the 1870s, enough water was needed to support a thriving mining town. Reservoirs have been dug. The water has been carried away from afar. Then, in 1901, a 33-foot-high steel water tank painted silver, hence his nickname, has been erected about a mile outside of town. As the threat of drought lingered (and remains to this day), it transformed the dusty Cobar, a freckle on the edge of the Outback, into something of a desert oasis.

Today, Cobar runs water from the Burrendong Dam, about 233 miles east, and the reservoir, whose silver finish long ago succumbed to rust and graffiti, is empty of water. . It was, however, filled with something new – music. On April 2, after two decades of work, it will officially be reborn under the name Cobar Sound Chapel, a daring sound art collaboration between Georges lentz, one of Australia’s foremost contemporary composers, and Glenn Murcutt, an Australian architect winner of the Pritzker Prize. For his reinvention of the roofless tank, Murcutt installed a cube of about 16 feet in its cylindrical space, in which “String Quartet (s)” by Lentz (2000-21), a classic work meets electronics lasting 24 hours, will be played in a loop via a quadraphonic sound system. Inside the bedroom is a concrete bench seating up to four people, from which one can look through the ceiling’s gold-rimmed oculus. Morning, noon and night, then, the sound flow from another world will reverberate throughout the concrete cabin and spread across the sky that inspired it. The hope of the artists is that their work will inspire visitors to ponder our place in the universe. “There is a mysterious element in our existence that we ignore at our peril,” said Lentz, 56. “As we turn to something higher than ourselves, we realize that we are just that little thing in this big picture.”

Lentz has been plagued by questions of cosmology and spirituality since his childhood. Born in Echternach, a small town in Luxembourg that formed around a 7th century abbey, he grew up attending classical music festivals and stargazing with his father. He later studied music in Hanover, Germany. While taking the train to college in the fall of 1988, he came across a story in the German science magazine Geo about the creation of the universe. It brought out the smallness of humanity for him, and he fell into a depression that left him sleepless for weeks. “This it was like an abyss in which you look and say to yourself: ‘Wah!’ He said.

Since then, Lentz has devoted all of his work to exploring questions of the cosmos, transforming his initial fear into a quest for contemplation, one that only intensified after moving to Australia in 1990 and being exposed to the ocean of Outback skies. Both the continuation and the culmination of his work, “String Quartet (s)” began as an attempt to translate this sky into a score. To do this, he collaborated with the Noise, an experimental string quartet based in Sydney. They used a range of techniques; to reflect a starry night, for example, musicians invoked contemporary pointillism Aboriginal painter Kathleen Petyarre, pulling their bows at the top of their instruments to create pieces of her contents. “If you repeat that,” says Oliver Miller, Noise cellist and the Chapel’s technical and creative advisor, “it converges into a galactic formation where you get a Milky Way cluster.

They ended up with roughly six hours of music, which, thanks to digital editing, Lentz developed into a 24-hour soundscape infused with technology of terror, wonder and reverence. Inspired by Gerhard Richter, he superimposes the recorded sounds as if they were in a palimpsest. In one piece I sampled, a curtain of piercing strings gave the impression of a dust storm haunting the horizon. In another, I fell into a reverie as the strings pulled back into shiny, ethereal dots, sounding like an empty basement. I listened from the top of a hill in Connecticut, but hearing the music inside the chapel would be an experience on a whole new level.

Around 2000, Lentz began to dream of a music box in the middle of a copper landscape, a place where his music could live alongside his muse. But it wasn’t until he gave a concert in Cobar in 2008 that he saw the city as a potential site. He pitched the idea to Cobar Shire Council, who then came up with the top of the hill carrying the tank, suggesting it be demolished to make room. “Absolutely not!” Lentz said. Soon after, he called Murcutt, 85, famous for his hand-drawn, landscape-specific designs inspired by Australian vernacular architecture, such as farms and mowing sheds. “You’d have to be crazy to do something like that,” Murcutt remembers thinking. “But it’s also extraordinary.

Murcutt has always been drawn to the desert, the rarity of which resonates with the Aboriginal mantra – touch the earth lightly – to which he tries to conform. True to this idea, he set out to design, largely with government funding, a simple solar-powered chapel that would unify sound, site and atmosphere. Two large concrete slabs mark the entrance to the exterior. Inside, the cubic space (which is tilted slightly to optimize acoustics) is austere, as is the desert itself. From all four corners of the ceiling, sunlight streams through Russian blue glass windows painted by local Aboriginal artist Sharron Ohlsen, who also uses pointillism in her work. And, during each day, an ellipse of light passes through the concrete floor and walls, which have been poured into corrugated iron forms and act as sound diffusers. Music echoes from a speaker in each wall, enveloping listeners, Miller says, as if they were “moving through a cosmic nebula or swimming in a school of deep-sea jellyfish.”

And so, more than a century after arriving in town, the Silver Tank – which promises to put Cobar on the cultural map, especially as the chapel will host an annual string quartet festival sponsored by Manuka Resources, a mine locale – again provides something essential. For anyone who spends time indoors, it provides a sanctuary to contemplate the existential questions that, especially in the age of the pandemic, haunt us so intensely. And while the room may not provide the answers, it’s also a heartwarming reminder that even in a vast, seemingly empty expanse, there can still be music.

“Popcorn Time” stops due to lack of use * TorrentFreak