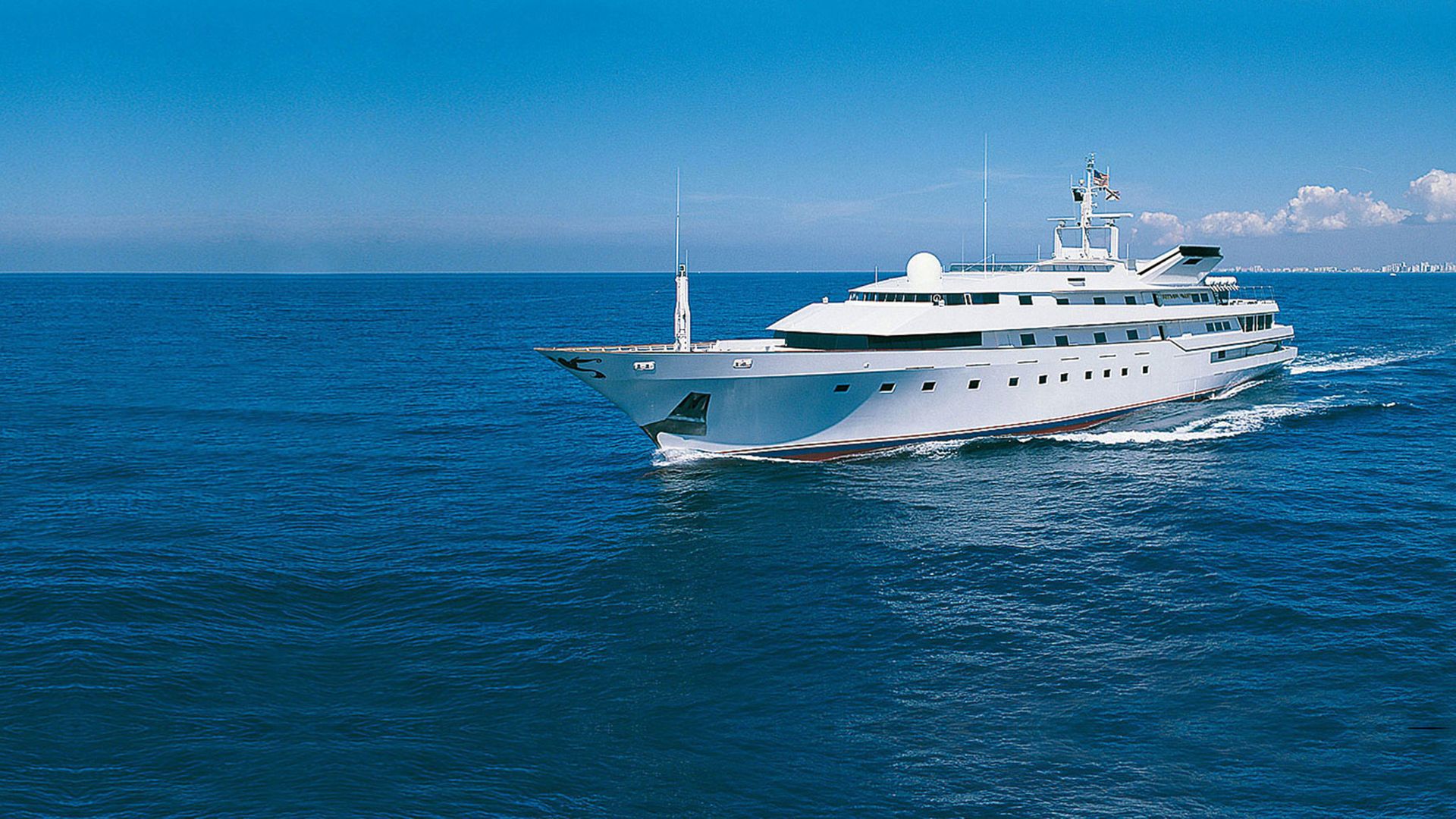 First published in 1989 as part of The Superyachts Vol. 2

BOAT dives into the archives to tell the whole story of Donald Trump’s purchase of the 86-meter Benetti superyacht Nabila and turned it into Trump princess.

â€œA certain level of quality. This is the phrase Donald Trump comes back to over and over again to explain why he bought Adnan Khashoggi’s 86-meter yacht. Nabila. And an explanation is needed.

After all, Trump doesn’t water ski or swim, and he always tried to avoid the sun. In fact, he’s never owned a big boat before. He doesn’t even particularly like boats. â€œI don’t like it,â€ he said with a shrug, â€œI’ve been on friends’ boats before and couldn’t get off fast enough. “

So why spend almost $ 30 million on a yacht? Trump will admit that she is an “incredible toy” if not “the ultimate toy.” But words like that make the whole adventure frivolous, so he prefers to refer to the boat he renamed Trump princess, like “a work of art”. And what makes her a work of art is of course the “level of quality”.

To really appreciate the level of quality, Trump says you have to see the inside. This is where Khashoggi lavished the money with utter abandon. Trump recalls, for example, cabin walls covered with chamois and bird’s eye maple.

Bathrooms are not marble but onyx – and not just any onyx either, but onyx hand-carved by the best artisans in Italy. Donald Trump bought Trump princess, he says, “because I was buying a great work of art at a ridiculously low price.”

Unlike Trump, Adnan Khashoggi has always had a thing for boats. The arms dealer, who took advantage of his connections with the Saudi royal family to amass a fortune of around $ 3 billion in his heyday, acquired his first yacht at the age of 18 and traded as he went as his wealth increased.

By the 1970s Khashoggi owned two yachts and while these are impressive none made the bare assertion of the fantastic wealth he needed, so he commissioned British designer Jon Bannenberg to design the yacht on the most lavish and amazing the world has ever seen.

“He wanted the best yacht in the world,” says Bannenberg, “and we got there back then.” The ship created by Bannenberg cost $ 35 million to build, but Khashoggi also commissioned Italian designer Luigi Sturchio to produce the interior and that would have cost more than the yacht itself.

Trump princess has more than 100 cabins

â€œNobody really knows what it cost originally,â€ says Jonathan Beckett, CEO of Burgess, the broker who arranged the sale to Trump. Appointed Nabila, after Khashoggi’s only daughter, the ship was launched in 1980. Insisting that it be fully self-sufficient, Khashoggi had everything included in specs, from a bakery and hair salon to three chairs to a bathroom. projection room with a library of 800 films and a hospital with operating theater.

There is accommodation for a crew of 52 people. To get ashore and back there is a helicopter landing strip and a pair of nine-meter tenders. Fuel tanks containing 618,256 liters of diesel provide a maximum range of 8,500 nautical miles at cruising speed of 17.5 knots. Three watermakers produce 45,000 liters of fresh water per day from the ocean, and six gigantic refrigerators provide three months of food for 100 people.

Most of Khashoggi’s most lavish parties took place on board Nabila, but the yacht was also an invaluable commercial instrument. Not only movie stars but also political leaders and diplomats were invited on board. On one occasion, five heads of state – including three kings – were received simultaneously.

Often, NabilaThe guests were Arab princes as well as European and American businessmen of all kinds. Installed in the various suites, they used the 150 telephones and the satellite communication system to organize arms sales and trade in goods. When contracts were ready to be signed, the yacht could quickly slide into international waters, where sovereign restrictions on commercial transactions do not apply. On numerous occasions, several transactions were carried out simultaneously, in different suites.

A tour of the entire yacht, which has five decks and a hundred distinct areas, would take too long, but a description of the owner’s suite alone should be enough to give an idea of â€‹â€‹the exquisite luxury on board. Trump princess.

The chamber occupies the entire width of the hull. It has a tortoiseshell ceiling, three-meter-wide bed, and bedside remotes for the entertainment center, for room service, even for the curtains. He also has a secret exit.

From the bedroom, we descend a hallway past a mirrored walk-in closet and into Trump’s bathroom, where the onyx floor tiles are carved in a sunburst pattern. On one side is a room with the owner’s barber chair. Next to it are the shower and the sauna. The shower has 13 nozzles and is carved in the shape of a scallop from a single piece of onyx – a task that took a team of workers a year.

From the bathroom, we step into Trump’s television corner, then into his large sitting area, paneled with the essential chamois leather. From there we take the owner’s private elevator (there is another for the guests and a third for the crew) to his private terrace.

A closed section houses the bar, pantry, video games and another sauna and shower. Outside, behind bulletproof glass, is a circular swimming pool 2.4 meters in diameter.

It might seem a bit small, but there is a stream of water so you can swim against the current all day and never reach the other side. A hydraulic lift elevates the lounger well above anyone on the boat, allowing the bather to bask in privacy.

Each cabin on Trump princess has its own bathroom

When Khashoggi’s empire began to collapse in the mid-1980s, he took out a $ 50 million loan, setting up Nabila as a guarantee. When Khashoggi defaulted on his loan in 1987, a Swiss holding company took possession of the yacht. She was therefore placed in Burgess’ hands with instructions to dispose of the yacht quickly at an asking price of $ 50 million.

In September 1987, almost as soon as he learned that Nabila was for sale, Donald Trump made a cash offer for the yacht. Burgess had already received two other offers, including one equal to the one made by Trump, but subject to several conditions. Jonathan Beckett flew to New York and countered Trump’s offer with a $ 32 million proposal. Trump responded with $ 28 million, and half an hour later he had agreed to pay $ 30 million – for a yacht he had never boarded.

As soon as the news broke, Beckett was suddenly inundated with higher offers from potential buyers who had remained on the fence. Meanwhile, Trump managed to pay less. He was contacted on behalf of Khashoggi, who was reportedly upset that his daughter’s name was now on a yacht owned by someone else. Negotiations followed and Trump agreed to rename the boat Trump princess if the cost was reduced by about $ 1 million. â€œHe got an incredible deal, in retrospect,â€ says Beckett.

Trump then spent $ 8.5 million to have the yacht refitted in the Netherlands by Amels who repainted the hull, rebuilt the main engines and replaced 320 yards of chamois. One of the most garish cabins has become the children’s bedroom and the hairdressing salon a cloakroom.

Renamed Trump princess, the yacht, which Trump says will cost around $ 2.5 million a year to operate, left the Azores in June 1988 and arrived in New York City on July 4 in time for the big party the Trumps threw this that night.

In addition to private cruises with his family, Trump, like Khashoggi, uses Trump princess as a commercial instrument, albeit in a somewhat different way. Trump princess spends the summer months cruising the east coast from her base in Atlantic City, where she docks at the marina within sight of Trump’s Castle Hotel. Trump is making the boat available to select charities and “really big guys who spend millions of dollars a year in casinos.”

â€œThere’s a whole market out there,â€ says Trump. â€œWhile I was building Farley Marina, I was trying to get the boat, because I knew it would wow everyone. It would become a spectacle.

But what is it Trump princess has always been – a spectacular statement of astronomical wealth, a massive piece of equipment designed to arouse envy in those who behold it. Khashoggi had stipulated that the boat would be huge enough to intimidate even owners of large yachts – and it is.

A few years ago, a friend of Trump’s was at the helm of his own very large yacht in the Mediterranean – and felt quite proud – when Nabila roared by, practically flooding her. â€œHe said it gave him a total inferiority complex,â€ Trump says. And that’s without a doubt another reason Trump bought it.