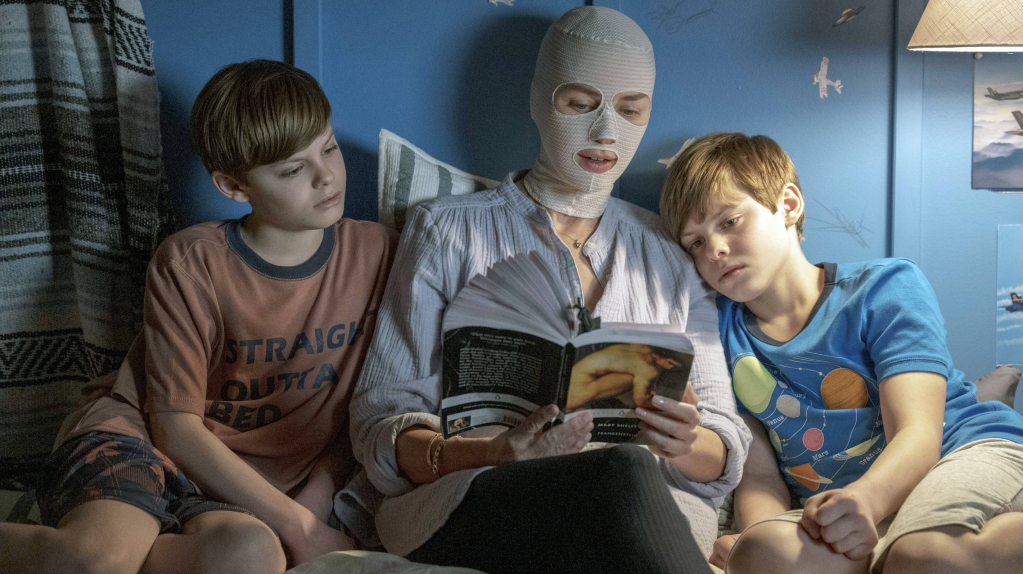 Naomi Watts plays a mother who returns home to her sons after undergoing cosmetic surgery, but isn’t quite the same person who left them. Her bandaged face as she recovers hides more than a person healing from a procedure.

Colston wanted the family home to play on the idea that it was “a map of trauma.” The house starts out bright and welcoming with white walls and high ceilings — a look she calls “Goop mom,” after Gwyneth Paltrow’s ambitious brand.

But as the story unfolds, the boys, Elias (Cameron Crovetti) and Lucas (Nicholas Crovetti), begin to notice a change in their mother’s behavior. She tears up their drawings; implements new house rules, such as no running or shouting; and start smoking. At this point, the visuals begin to change and the audience begins to see more of the house.

Dynan’s approach was to experience the home from the boys’ perspective. “We always wanted to be with them, so we used tracking shots and Steadicam at their height so we could see them or what they were looking at,” he says.

Colston made the boys’ room a sanctuary. She used a soothing blue to give it a warm and comforting feel. In contrast, their mother’s bedroom exudes a sense of illness. The curtains are dark and the room itself is dark. “The more you walk into the room, the more the world makes you wonder, ‘What’s going on with this woman? ‘” Colston said.

Colston and Dynan worked to exaggerate the feeling of unease. Deep sea greens and purples were Colston’s favorite colors for Watts’ bedroom, where the curtains were always drawn, with only a few rays of sunlight streaming through.

Even the bathroom, where she smokes and tears up her sons’ drawings, is dimly lit to create a sense of danger. Dynan says, “You think, as an audience, that she’s just a stressed mom? Or is there something else?

UB Humanities Institute’s Annual Festival Reflects on “Life in the Age of Artificial Intelligence” – UBNow: News and Views for UB Faculty and Staff