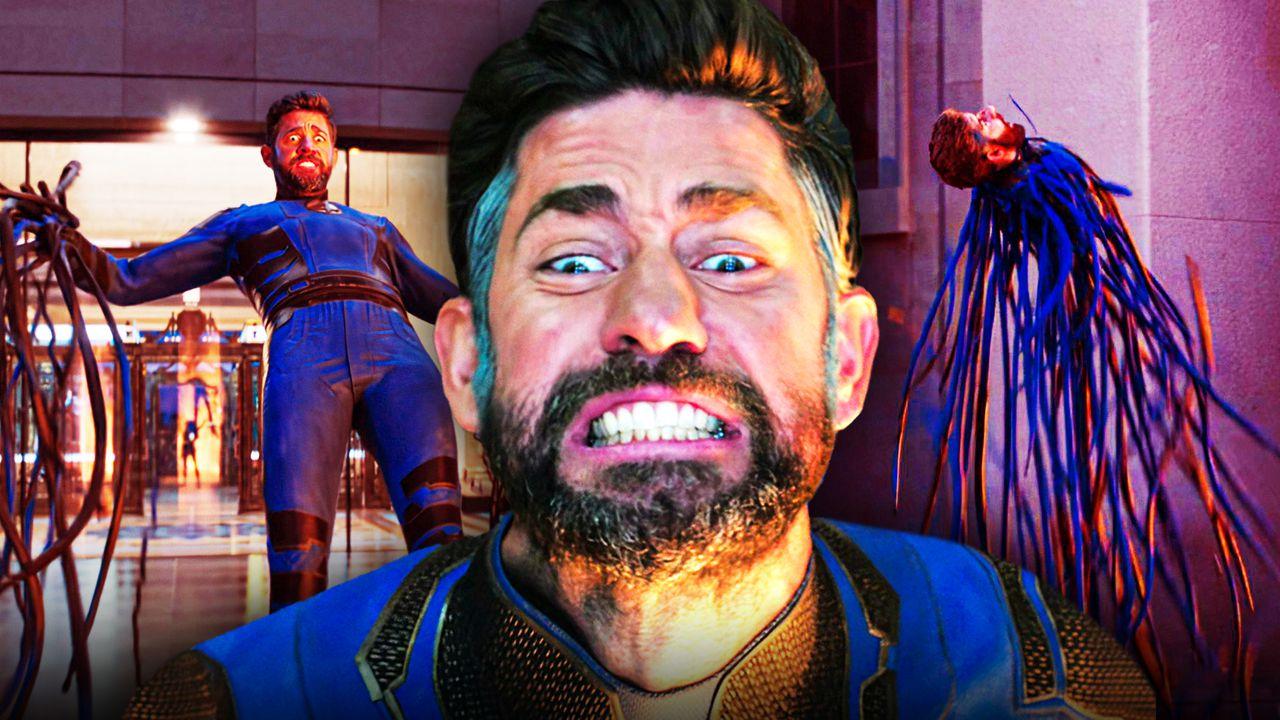 John Krasinski’s appearance as Reed Richards/Mr. Fantastic in Doctor Strange in the Multiverse of Madness was a dream come true for the many fans who had long clamored for him to be cast in the role. Krasinski did a fantastic job (no pun intended) of bringing the character to life, but perhaps most memorable about playing Reed in the film was his grisly death at the hands of Wanda Maximoff/The Scarlet Witch by Elizabeth Olsen.

In what is arguably one of the most gruesome (if not the most unique) sequences in MCU history, Wanda systematically tore the Illuminati apart, only briefly battling characters like Hayley Atwell’s Captain Carter and the Captain Marvel from Lashana Lynch. Anson Mount’s Black Bolt scrambled his own brain with his booming voice, and the self-proclaimed “smartest man alive” was turned into spaghetti by Wanda’s chaos magic.

Industrial Light and Magic, who brought the battle to life, recently shared exactly how they crafted these iconic scenes and their surprising inspiration.

ILM shares how they took down the Illuminati

In an interview with before and after, ILM visual effects supervisor Julian Foddy has lifted the curtain on how the special effects studio tore Reed Richards to pieces with techniques that left Black Bolt blown away. The inspiration for Reed’s death, in particular, came “directly from [Marvel Studios president] Kevin Feige:

“At some point, Wanda turns Reed Richards (John Krasinski) into all these jagged, stringy shapes. The starting point was a reference passed to us by Janek Sirrs directly from Kevin Feige. It was someone running a piece of modeling clay or Play-doh through a garlic press.

Designing this kind of destiny for Mr. Fantastic was not easy. Fody remarked that it was a challenge to “build a setup that doesn’t just feel like the geometry of the body was emitting something else.”

Looking specifically for this stringified effect that Feige had visualized, they had to “invent a way to disassemble and shred the real model” so that “the correct texture coordinates would pass and be washed away with Reed’s ‘strings’, as they were all jagged.”

If they achieved the result they were looking for, it was not without difficulty. According to Fody, he “It was quite a technical challenge:”

Getting it to feel like an organic material and getting the right amount of flex and balance for the strings as they come loose was quite a technical challenge. There were cheaters, because if you were to tear a real human being apart like that, there would be a lot of flesh and blood. Of course, it’s a Marvel movie and we don’t want to be too awful.

Interestingly enough, Fody revealed that “Both Reed and Black Bolt are wearing all-digital suits.” Even in the close scenes where the Inhuman King liquidates his brain with his voice, “It’s an all-CG outfit he’s wearing.”

Black Bolt also received its own special treatment for ILM. When Wanda removed Black Bolt’s mouth, the studio used “a CG patch we created using the actor’s texture photography.” Regarding the creation of his disturbing death scene, Foddy notes, “The way we approached it was to do it almost for real.”

The crew “started out looking at a lot of references of destroyed things in slow motion” and “watched human faces in wind tunnels”. Although time-consuming, Fodge thinks the process “was definitely a worthwhile task, it really yields interesting and horrifying results.”

Open the door to a more gruesome MCU?

All along Doctor Strange in the Multiverse of Madness, the special effects were absolutely fantastic. This was incredibly demonstrated in the battle with the Illuminati, and the work ILM has done to bring these close-ups to life in seconds shows the level of care and attention to detail that goes into making these films.

An interesting question arises: is this the start of a more macabre MCU?

While sure no one expects Marvel Studios to turn the franchise into something like Amazon’s The boys, it seems clear that the studio is getting more and more comfortable tackling darker, more disturbing themes. Disney+ projects like moon knight and movies like Multiverse of Madness stand in stark contrast to the bright colors and muted violence of early MCU entries like The Avengers.

The answer here probably lies somewhere between the extremes. In a wise decision, Kevin Feige and company seem determined to adapt the style of each project to the nature of the characters they represent. Whereas moon knight was at times almost a psychological thriller worthy of its tortured protagonist, Ms. Marvel is shot in a style strongly reminiscent of comedy dramas like MTV’s Annoying.

This approach is, in the opinion of this author, brilliant. Not only does this keep Marvel projects from feeling like constant repeats of the same style, but it also allows for more focus on the characters. moon knight was what it was because it was the best way to tell the story of Marc Spector. Ms. Marvel brings the Kamala Khan of the comics to life while having an air that matches the coming-of-age experience of a teenager navigating worlds apart.

Multiverse of Madness was just as much a part of that philosophy as anything else. Sam Raimi’s blockbuster had many stylistic elements reminiscent of his earlier works like evil Dead and army of darkness, which works perfectly for a story that focuses as much on the occult as the Doctor Strange sequel. The confrontation with the Illuminati wasn’t horrible just to be horrible; this served as a story point, demonstrating how far Wanda had fallen and the brutality she resorted to.

It’s becoming increasingly clear that although the MCU is a shared universe, the style and pacing of each individual project will be tailored to match the characters and the story being told. Fans should look forward to new entries, as each promises to bring their favorite characters to life in the most authentic way possible.

Op-Ed: Auditing the Federal Reserve would keep them honest | Opinion