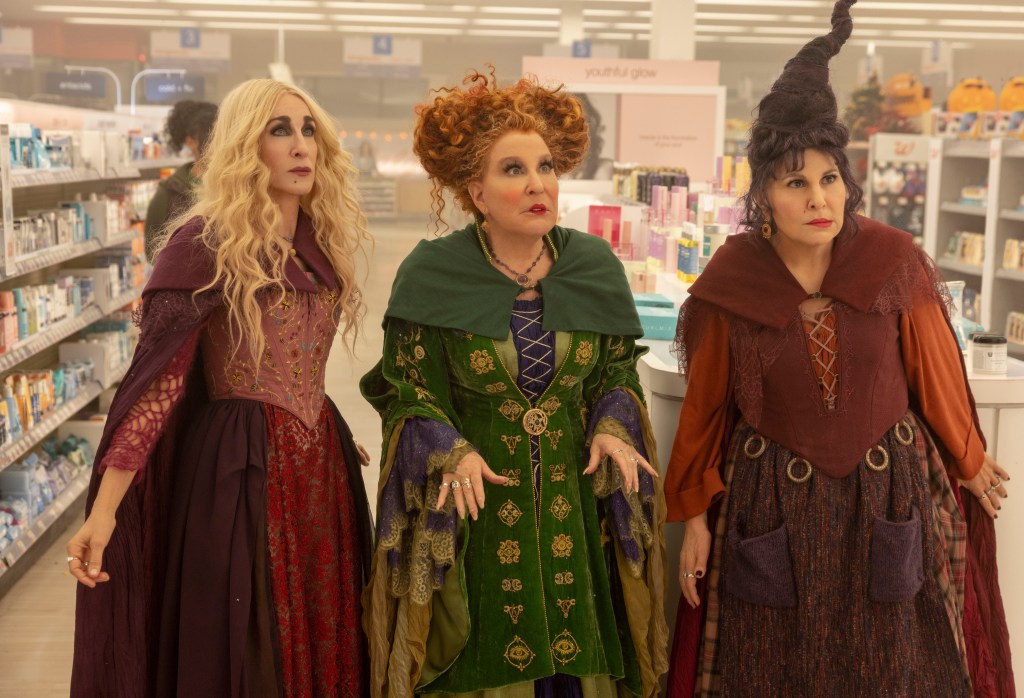 How ‘Hocus Pocus 2’ Updated Witchy’s Look From The Original

It’s been 30 years since the first “Hocus Pocus,” which ended with the disintegration of Sanderson sisters Winnie (Bette Midler), Sarah (Sarah Jessica Parker), and Mary (Kathy Najimy). The Sanderson sisters are back in ‘Hocus Pocus 2’, now streaming on Disney+.

After a brief introduction to the story, Salem teenager Becca (Whitney Peak) is tricked into lighting the black flame candle by Gilbert (Sam Richardson), the owner of the magic shop, formerly the home of the Sanderson sisters. And so the sisters are resurrected.

Costume designer Sal Perez resurrected the trio’s outfits, then went even further to breathe new life into the beloved property.

At the end of the first movie, the sisters’ clothes also disintegrated along with their bodies. Perez says: “With that mindset, I thought, ‘What would they come back in? “”

The sequel’s director, Anne Fletcher, guided Perez. “She said, ‘I want everything to make sense, don’t just arbitrarily put something on it,'” Perez says.

As a veteran in the world of costume design and president of the Costume Designers Guild, Perez reached out to Mary Vogt, who served as costume designer on the original.

The first thing he wanted to know was what the symbols meant. But he learned that despite using runes and ancient symbols, she changed them because “she didn’t want them to be negative or evil. They didn’t matter,” he said.

Perez took a different approach. He gave the outfits a story. “I thought they should have a tradition, so we did this whole concept around the three sisters, powerful goddesses, the three moons: waxing, waning and full, so the imagery on Winnie’s costumes all tied into that. .”

Perez explains that Winnie’s original costume was dyed green. The pattern seen on the dress was stenciled and bleach sprayed on it.

For his part, he makes a dress in silk dupion. Perez says, “It’s lavish embroidery with gold thread, real crystal and semi-precious stones. We added silk velvet and muslins. He adds: “Next, it was a question of finding the same fabrics for the capes, because the beauty of the cape lies in the way it flutters in the wind. We had to find very light silk to mimic this same look. Everything was done in layers of different colors.

Additionally, he also put the symbols on the witch mother (Hannah Waddingham).

He says: ‘She had them on her sleeves and the brooch on her neck becomes Winnie’s brooch on her coat. The original coat had two silver serpents. I made mine in brass. I wanted to go back to the original, which contained a malachite stone. So I found some vintage stones in Providence, Rhode Island, when we were filming, and we added them to the dress. It was a circular symbol with tree branches reminiscent of the forest, a moon and a pentagram star with the malachite stone.

For Sanderson’s youngest sister, Sarah, Perez explains that the original costume worn by Parker was made of machine-embroidered upholstery.

He explains: “In the 1650s you would never have had embroidered cloth, you would have embroidered the pieces. I went to Eric Winchell in New York, and he beautifully hand-embroidered her corset. Perez adds, “I found old tapestries that we took the design from and made them more witchy. Unlike the vines, they were thorns. I added spiders and beetles to it.

Fletcher didn’t like the original’s mesh sleeves because they looked too ’90s. He says, “We did cobwebs instead. I had worked with a knitter, Krista Ann, who for years had done a lot of Mindy Kaling stuff, so she had crocheted the cobwebs and then made them into sleeves.

Sarah’s skirt was made of several layers of chiffon and organza dyed in different colors. Perez describes the outfit as “purple over gold over dusty rose. The front panel was this funny lace with a diamond pattern in it.

Thanks to online shopping, he was able to find exactly what he was looking for. “I was shopping on Solstiss Lace and found this burgundy metallic gold thread lace with the exact diamond, and it was the weirdest coincidence. I could find just enough to make eight skirts for her.

Middle sister Mary had a costume that Perez also refreshed. But again, looking at the original, he says, “Mary’s costume was made of plaid with this lace pattern that still had no meaning for the 1650s. But tartans have been around for hundreds of years . So, I made her tartan skirt and found some loose open weave silk which I used for the black and white part.

He adds: “The rings that were on her corset were curtain rings. I took them to a jeweler and in this Wiccan language, sigils, air, water and earth are carved into them.

Appearing in flashback, Waddingham plays the witch mother, the witch who ties the young Sanderson sisters to the black flame candle. With this character, Perez brought a whole new character into the fold, but keeping traditions alive.

Fletcher’s direction to Perez was that the mother witch was gorgeous and incredibly beautiful, not spooky and scary. “She must have looked like a goddess,” Perez says. To give the character texture, he created a hand-pleated silk habotai dress with shredded layers that were then dip-dyed.

Says Perez, “She was supposed to be a bird and has the same markings as the red-winged crow. So I shredded some muslin to make her look like feathers. Perez adds, “No one was more excited than Hannah.”

And while there are Easter eggs all over the place reminiscent of the original, Perez teases looking for the eye symbol. He says, “There’s an eye symbol on almost everything. Becca has it on her shoes and Cassie (Lilia Buckingham) has it on her blouse. It’s throughout the movie.

Why do we still have a hard time letting women look unsexy?