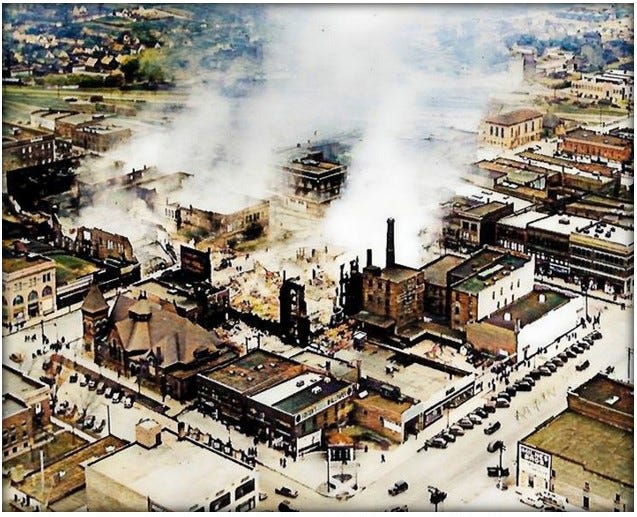 Eighty years ago, downtown Kewanee nearly died. People went to bed on Sunday nights expecting another ordinary week of work and shopping. Instead. they were awakened in the early hours of Monday, April 13, 1942, by a fire that would leave all but a few buildings standing in a two-block area of ​​the downtown business district.

Twenty buildings burned. 59 businesses were destroyed and 6 heavily damaged. The listing on the front page of the 7 am Star Courier EXTRA was literally copied from the city directory. The loss was eventually estimated at $3 million, a staggering figure 50 years ago.

The fire started around 1.30am at the largest store in town – Kewanee Dry Goods, located on the east side of the 200 block of Tremont Street. The department store had three floors, a basement and a real novelty – an elevator.

The fire-blackened walls were all that remained in an hour when the fire engulfed this store, the Leader Store Corner (now Breedlove’s). Carp’s Department Store (now the Kewanee Historical Society) and the Rialto Theater (now part of Good’s).

Whipped by strong winds. the fire quickly crossed Tremont Street. Within half an hour, Kewanee Public Service was gone and flames fanned north and south, consuming JC Penney (where a 40th anniversary sale was underway), Kirley & Son and other businesses.

By then, the firestorm was heading west down Second Street.

The fire was the enemy and the firefighters the troops as downtown Kewanee became a battlefield. Fire equipment from Toulon, Galesburg, Peoria, Wyoming, Galva, Cambridge, Neponset, Bradford, Sheffield, Wyanet and Rock Island were dispatched to the scene. Firefighters occupied hoses atop buildings on the north side of Second Street as those with businesses there and to the north frantically rushed to save records and property.

Volunteers busied themselves putting out small rooftop fires as high winds blew sparks and debris onto nearby buildings.

Firefighters were able to keep the flames from moving south using a water curtain from the Star Courier’s sprinkler system.

As hell roared west down Second Street, firefighters worried about the Parkside Hotel and the Peerless Theater and moved everything they had to Chestnut Street as a last resort. By dousing the hotel and theater with water and forming pipes on the fire wall to the east, they finally stopped the forward march of the fire at the corner of Second and Chestnut.

Two firefighters were injured, but miraculously no one died. Hundreds of downtown apartment dwellers were left homeless, shivering and crying in the lobby of the Parkside.

In the light of dawn, the real impact of the disaster became visible. Twisted beams protruded from piles of bricks. smoke and parts of walls. It’s like the bombed-out cities of Europe seen in the news, not their hometown.

The cause of the fire was a mystery. A night watchman at all three floors of Kewanee Dry Goods said he heard a muffled explosion. but a Rialto concierge who spotted flames coming from the back of the second floor, heard nothing. There were even those who claimed to have heard a low-flying aircraft and thought it might have dropped a bomb intended for the Walworth.

The fire made national news. AP brought its wired photo machine to Kewanee for the first time and Paramount News shot footage for the motion picture news.

Ten years after. the burnt-out area was the scene of one of the state’s most modern business districts.

10 Best Quotes From The Lord Of The Rings Trilogy, According To Reddit