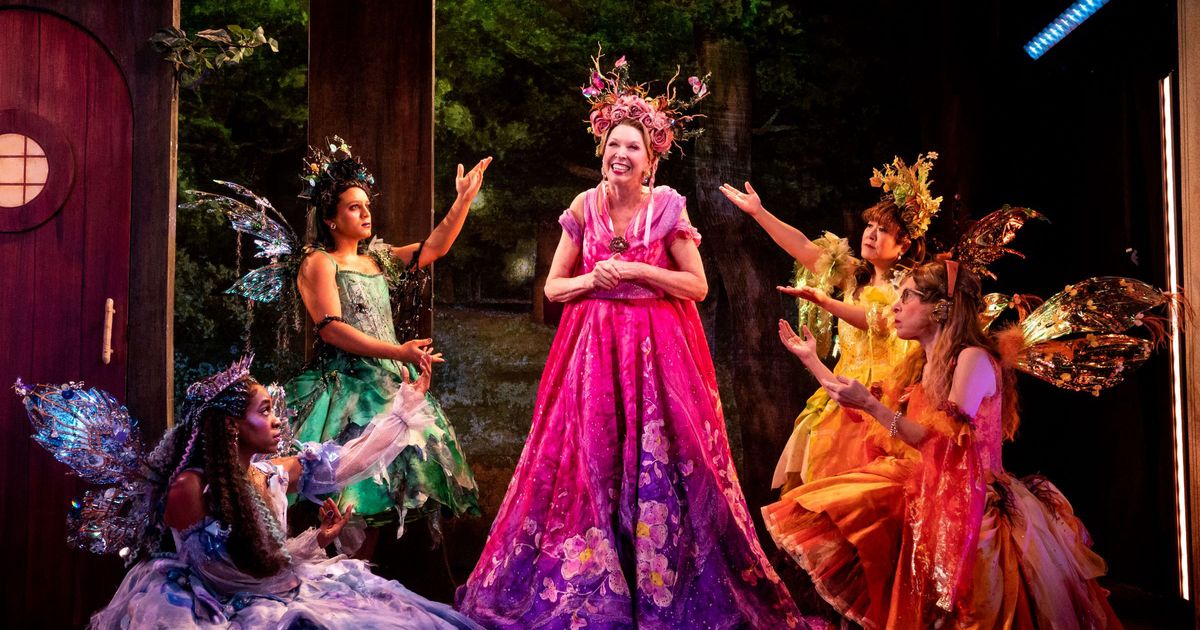 Based on the comedy in verse by Douglas Carter Beane Fairy cakes, magic works just like the economy of concerts. There is no time off, no guarantee of magic in the future, and your safe working mom and dad don’t take your job seriously. In Beane’s world, every fairy – including Bad, Blue, and Tinker Bell – is actually a member of an overburdened family. These precarious sprites are multitasking: Shakespeare’s Moth (Jackie Hoffman) A Midsummer Night’s dream also oversees Neverland; his sister Mustardseed (Ann Harada) is on lost tooth service and knows Sleeping Beauty. It doesn’t help that their fairy-boomer parents Titania (Julie Halston) and Oberon (Arnie Burton) continue to have marital problems, and that in the chaos the fairies confuse their missions. It’s a wacky, edgy staging, and Beane – also a director – gathered various Off Broadway treasures to mount the comedy. But even though everyone laughs at Beane’s vanity, nothing turns her fantasy into charm.

There are several reasons for the odd aridity of the series. First, there is an acidity at the heart of Beane’s confection. Most of the insane plot involves breaking up and rehabilitating couples, sometimes in more bizarre new setups. It’s sweet when pirate Dirk Dead-Eye (Arnie Burton) falls in love with Geppetto (Mo Rocca), or Kuhoo Verma’s gorgeous Cinderella looks at her own reflection and chooses herself naturally. But it’s less adorable elsewhere – the play’s key relationship, for example, is skunk. Oberon’s senior lieutenant, Puck (Chris Myers), is a pest; he calls Peaseblossum (Kristolyn Lloyd) “Fairycakes” whenever he pisses her off about a date. He harasses and moans, and ends up poking a magically destructive anger about his rejection. She hates the nickname, and it’s obvious from the dead air between Myers and Lloyd that there’s no spark to ignite. But in Beane’s sticky, sticky resolution, Peaseblossum’s mother, Titania, berates her for “accepting” that she loves both the name and him. Shazam! The magic is restored because a woman stops saying no to a bad Puck.

The hardest thing to bear, however, is Beane’s decision to write it down in verse. Rhymed couplets that last nearly two and a half hours work like a saw against your nerves, a saw that has exactly 15 syllabic teeth. Some cast members may outdo the tongue – Hoffman improvises like a champ; Jason Tam’s Cupid pushes his way through the lines like he’s too stoned to remember; Burton, with his long experience as Shakespeare, actually makes poetry sound like speech. It is telling, however, that the best moment of the series comes when Beane deliberately breaks it. In the second act, Puck disrupts the fairy magic and the poetry desert all the characters at once. Watching Z Infante’s Sleeping Beauty trying to figure out, on the fly, how unmeasured language works has immediate pleasures. Prose! You have never loved so much.

Beane loves the form of stuffing; he clearly cares about Shakespeare (there is a bit when Julie Halston pulls out a copy of The summer solstice to give us a little lesson). So it’s strange to see such a gifted comedian downcast, his strength turned against him. Maybe the show needs a director with a more practiced and lighter touch. Fairy cakes is part an homage to Charles Ludlam’s Theater of the Ridiculous, part college fun and part fun – and these categories both need a village, anarchic excitement to work. Here, however, the actors seem a bit lost and distant from each other, swimming in Gregory Gale’s magnificent costumes, the only truly lavish and well-regarded element on stage. It wasn’t until the encore, when everyone was dancing together, almost helping each other with their high kicks, that we got a glimpse of the kind of production that could’ve been all buddies.

In fact, the show Beane might have wanted to do was last week at Joe’s Pub. During a weeklong engagement, Taylor Mac and friends tried out new songs for a show titled (still tentatively) Sugar in the Tank: new songs about gay people. Mac wore a rainbow wig that waved Phyllis Diller – rather in the breeze, and Saturday’s show started off with a costume malfunction, which couldn’t have been less important. There was virtuosity on stage, but everyone wore it easily, jamming for love, occasionally discussing choreography as it went. The show was very cavalier, which made every song wilder. Mac kept making sure there wouldn’t be any transitions (“There’s nothing stranger than awkward silence”) but then he spoke anyway, blaming us for wanting to hear the lyrics. of songs about Larry Kramer and Mother Flawless Sabrina. “I know what you’re thinking,” Mac drawled. “I paid a lot of money for a work in progress. But it will always be better than anything else you do. And shazam! It really was.

Fairy cakes is at the Greenwich House Theater until January 2.
Sugar in the Tank was at Joe’s Pub October 19-23.