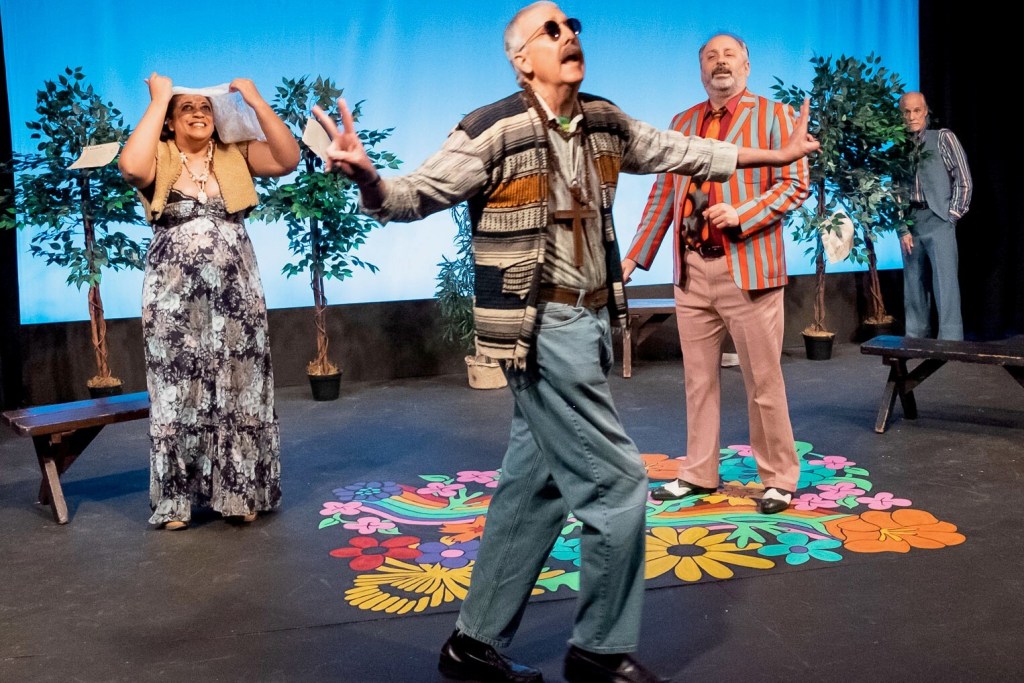 “What a long and strange journey it has been,” provided the perfect words for Masquers Playhouse to open its newly renovated theater in Point Richmond. The Grateful Dead’s lyrics to their classic song “Truckin'” launched the company’s first production in six years – Shakespeare’s “As You Like It”.

Reimagined by director/composer Rice Majors, the bard comedy has been updated for 1967’s San Francisco “Summer of Love” and filled with original Majors compositions as well as excerpts from classic rock tunes. Majors certainly picked the perfect lyrics to start her show, as the nonprofit’s journey to reopen its doors has indeed been a very long and winding one.

In March 2016, the historic theater abruptly closed when structural damage was discovered and remained dark while countless volunteers raised money for repairs. Many theater companies around the East Bay also helped organize performances in their venues to benefit the Masquers. Construction was well underway when the pandemic hit, causing further delays. Finally, the long and strange journey came to an end on January 21 when the theater performed its beautifully revamped revue on opening night.

Majors said he chose the Bay Area in 1967 for his setting “because the issues we face today resonate so strongly with the summer of love: a deeply divided political set, a mistrust toward government, an energized racial reckoning, and advances and setbacks around sex and gender civil rights.

Simple but colorful staging quickly moves the multitude of scene changes – a must with this nearly three-hour show. The music is a production highlight with plenty of 60s tunes as well as original Majors songs beautifully played on guitar by Shannon Kealey and sung by Pamela Drummer-Williams.

Berkeley: Shotgun Players kicks off the first installment of its 30th anniversary season champagne reading series with Diana Oh’s brutally candid yet funny play “My H8 Letter to American Gr8 Theater.” Oh’s play takes on the American theater industry and attempts to build a balanced relationship that is “no longer oppressive, silent, and damaging.”

The in-person staged reading takes place February 17-20 at the society’s Ashby Stage, 1901 Ashby Ave. in Berkeley. A live performance will also be offered on February 19. For more information, visit shotgunplayers.org.

Martinez: The beautiful voice of Eve Marie Shahoian will bring a Valentine’s Day treat at 8 p.m. Feb. 11 at the Campbell Theater at 363 Ward St. in Martinez. I had the pleasure in October of attending the Orinda Jazz Festival, where Shahoian performed. What an impressive voice and personality!

Equally at home with jazz standards and pop tunes, Shahoian also writes his own unique compositions. The longtime Danville resident will be joined by guitarist Mike Williams and bassist Aaron Germain for an evening of acoustic jazz, standards and original music.

The Campbell will turn into laughter at 7:30 p.m. on February 12, when it once again hosts Act II Improv for Good to tickle your funny bone. The improv band focuses on longer scenes that blend the band’s brand of humor with dramatic reality.

The laughs continue on Valentine’s Day with CoCoComedy at the Campbell, hosted by Bob Johnson. The show starts at 8 p.m. on February 14. For tickets to Campbell events, call 925-350-9770 or visit campbelltheater.com.

The show also features Diablo Ballet’s premiere of George Balanchine’s “Tschaikovsky Pas de Deux”. The eight-minute piece includes music that Tchaikovsky wrote for Act III of “Swan Lake” but was never used in the original score. Also on the program, the playful duet of “Book of Alleged Dances” by Val Caniparoli and “Wayfaring Pilgrim” by Michael Wells of Diablo on blues music.