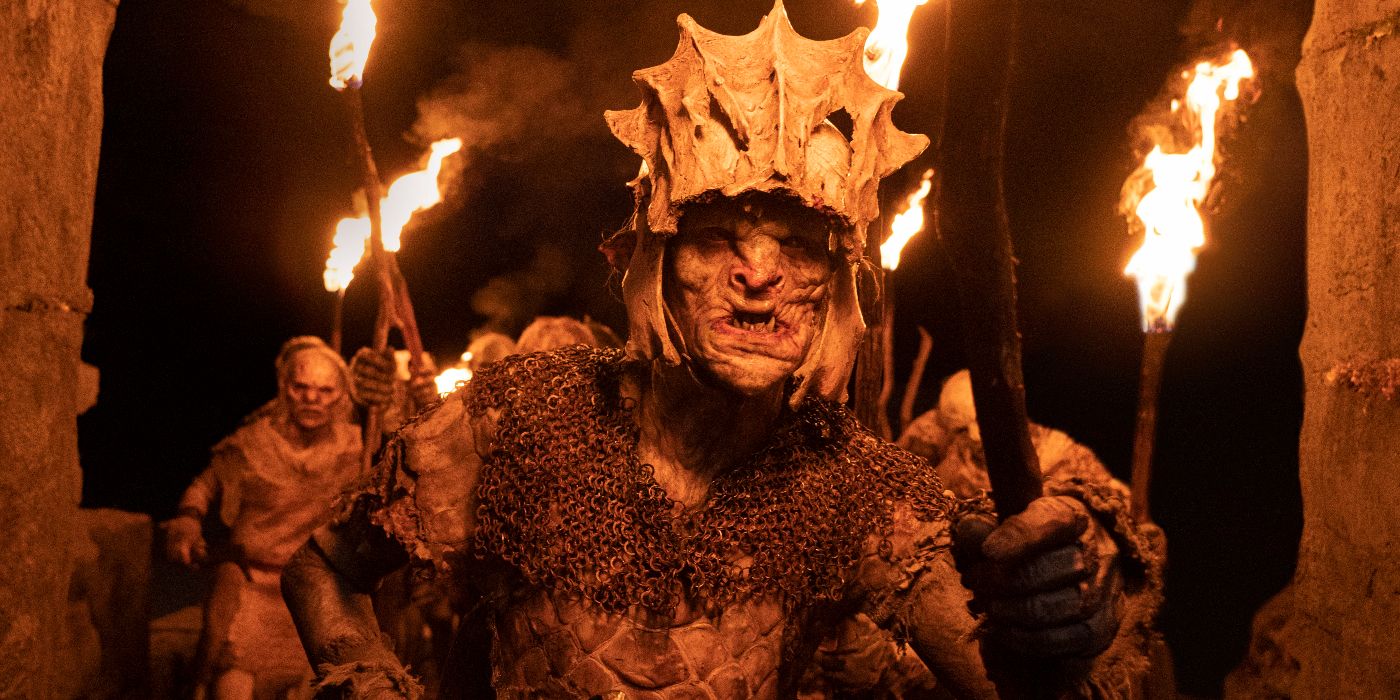 Every Easter egg in Adar

The third episode of The Lord of the Rings: The Rings of Power finally brought audiences to the shores of Númenor and pulled back the curtain on a number of plot developments that had been hinted at in previous episodes. Along with this new installment, however, came a whole new set of Easter Eggs based on other elements of Tolkien’s work, and a number that were reminiscent of the peter jackson trilogy too. Here are all the Easter Eggs you might have missed in Episode 3.

Númenórean art and architecture are full of references

There could probably be an entire article dedicated to the Númenorean Easter Eggs alone: ​​when Galadriel (Morfydd Clark) and Halbrand (Charlie Vickers) first reach the island, a series of message beacons are lit, reminiscent of the beacon lighting scene in The king’s return. A set of massive statues welcome newcomers, one of which resembles some sort of sea god. It can really only be one of two figures: either the Valar of the sea, Ulmo, or his support Maia, Osse.

When the harbor opens, there’s a handful of rapid-fire Easter eggs that hit you within about five seconds: the towering figure overlooking the harbor is Elrond’s father (Robert Aramayo) and Elros, Eӓrendel the sailor. Although it is certainly reminiscent of the Argonath statues of The Fellowship of the Ring, much more is going on: on Eändel’s forehead he wears the Silmaril which, according to legend, he carries every evening into the night sky. Right next to his shoulder is a kind of bird, which refers to the story of his journey to Valinor in the First Age. Elwing, his wife, escaped from the third murder with a Silmaril through the power of Ulmo, as he transformed her into a bird, and she was able to fly to her husband’s ship on the sea. The lonely mountain behind the port is also probably the Meneltarma, the sacred mountain of Númenor.

A few other elements reminiscent of Jackson’s movies also crop up later: In what appears to be the main palace building, the two statues flanking the white tree bear crests that look somewhat familiar. The figure on the right wears a crown which looks very similar to the crown of Gondor in The king’s returnand the figure on the left carries a sword that looks very similar to Narsil, the sword that was reforged for Aragorn as Anduril in the Third Age.

This shot also reveals the White Tree of Númenor: Nimloth, which is a descendant of Telperion (one of the two Trees of Valinor seen in Episode 1). As the context of the episode explains, the people of Númenor have drifted away from their relationship with the Valar and the elves, and the architecture around the tree supports this idea: the ancient elven-looking arches around the tree have clearly been neglected and abandoned, as have other old images around the island. This separation and distrust symbolized by the corroded architecture is largely the result of growing jealousy: despite the fact that the Númenoreans are the longest living humans in Middle-earth, they are gradually consumed by the desire for immortality and fear of death and view the immortality of the Elves and Valar as something denied to them.

RELATED: Who Is Adar, The Mysterious Figure In Charge Of The Orcs On ‘Rings Of Power’?

Elendil (Lloyd Owen) also interacts with a number of artifacts, which point to his family history and that of the island. When first presented, he wears an intricately designed cuirass, incorporating the Númenorean sunburst pattern with a male and female figure on either side. Given the signs elsewhere on the island, this is probably a reference to the couple Maiar, Uinen and Ossë, who are minor sea deities; Uinen is especially favored by the Númenóreans, as it is believed to calm sea storms caused by Ossë. The statue outside Halbrand’s cell later in the episode is also likely Uinen’s, and his might even be the ethereal voice of Isildur (Maxime Baldry) hears over the waves on his boat.

The sword given to Elendil by the Queen Regent is unclear. It may be Narsil, as Narsil was Elendil’s sword, but canonically the sword may have been a family heirloom even before Elendil. It belonged to Elros, but the main sword of the kings of Númenor was actually Aranrúth, so it is unclear exactly how the inheritance of Elros may have fallen into Elendil’s hands.

Isildur is also referenced as having been accosted by the King’s Guards at some point, and while the timeline doesn’t quite match, it may be a reference to another of Tolkien’s stories. Nimloth the tree is finally felled, spelling the fate of Númenor; in The Silmarillion, however, Isildur is said to have slipped into the tree’s enclosure the night before it was cut down and took a fruit from the tree, thereby preserving it for future generations. In this task he was caught by the king’s guards and injured by them in his flight. Although this is probably not the event referred to, it is probably a nod to the other story.

Perhaps the most compelling plot of Episode 3 was that of Rounding (Ismael Cruz Cordoba‘s) imprisonment and attempted escape. But it also provided some clever Easter Eggs along the way. On the one hand, there was a guest star who was herself a walking Easter egg: Jed Brophy.

Jed Brophy has now appeared in every movie adaptation of Middle-earth since 2001. In the original trilogy, he played one of the Ringwraiths, along with a handful of orcs along the way. In The Hobbit movies, he was the dwarf Nori. In Episode 3, he appeared as the orc named Vrath, who terrorized the captive elves as they dug the trench. It is not known exactly why they dig, but some theories claim that they are looking for the evil blade that Theo (Tyroe Muhafidin) found and used in the first two episodes. It certainly seems to have some evil intent, and it’s probably a desirable item for orcs to find.

Another interesting connection that came up was in the words Rounding said to the tree. He said “anin apsene”, which is a kind of request for forgiveness. The interesting thing about the line is that the word “apsene” is notably used in Tolkien’s translation of the Our Father in Quenya, in the line corresponding to “pardon us our trespasses”. It captures in a very poignant and subtle way the almost religious reverence the elves have for trees, and the “sin” that Roundir sees as cutting one down.

The use of prophecy and history

There is clearly a mysterious story to the family of Elendil and west of Númenor, but little to go on. Elendil’s family was that of the line of the Lords of Andunia, which lay on the western shores of Númenor, but in the years before the reign of Tar-Palantir, the party of the “Faithful” who remained loyal to the Valar and to elves. were forced to move to Romenne to the east, and thus separated from their home. It’s unclear what’s going on out west, but there’s definitely a “longing for a lost home” aspect at play in the storyline.

A few other tantalizing details appear in the episode, in many cases related to the plot of Númenor. The tapestry in the Isle’s Hall of Lore, for example, seems to represent the shared choice of Elrond and Elros, as one brother joins the elves and another joins the ranks of mortals. Eӓrendel the Mariner is referenced again when Sadoc (Lenny Henry) talks about hearing stories of people who became stars, “but not the other way around.” Even the cliffhanger at the end of the Númenor material is something of an easter egg: Míriel’s (Cynthia Addai-RobinsonHis father, the king, is known as Tar-Palantir. As his name suggests, he has the gift of foresight and prophecy, so Míriel’s comment about the “elf” coming to the island is likely a reference to a prophetic statement made earlier by her father, which bodes well for their kingdom. For now, however, we’ll have to wait and see what this prophecy is supposed to be.