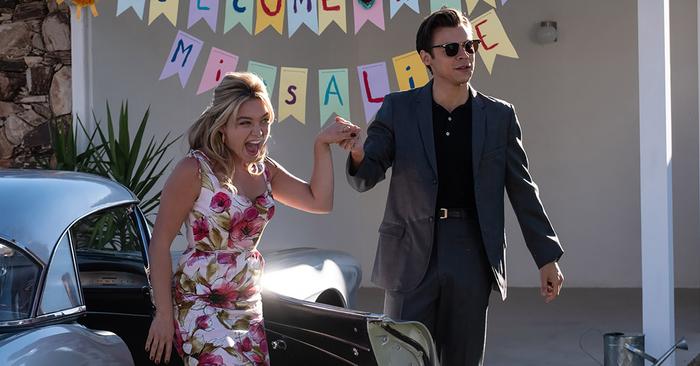 Unless you’ve been living under a rock or haven’t been online in the last month, the highly anticipated movie don’t worry darling has been on your radar one way or another.

The psychological thriller set in the 1950s, which premiered at the Venice Film Festival, follows a couple living in a utopian town called Victory. At first glance, the pristine suburban setting is perfect – or so it seems. When a few of its inhabitants begin to question their idyllic life and the Victory Project, no one seems to be able to explain themselves. The fabulous and brilliant Florence Pugh steals the show in more ways than one as Alice Chambers, the nosy suburban housewife of Jack Chambers, played by Harry Styles.

The film features a star-studded cast and boasts an intensely gripping story, but above all else, it’s visually stunning. I left the movie wanting to recreate every look, and was mesmerized by the bespoke costumes, attention to detail, retro prints, colorful backdrops, and the quintessential imprint that the 50s and 60s have left on fashion forever. .

In order to convey such a controlled yet alluring society of perfection, you need to bring in the best of the best, which is why director and actress Olivia Wilde, who plays Bunny in the film, enlisted three-time Oscar-nominated costume designer Arianne Phillips. Prior to don’t worry darlingPhillips has worked his magic on iconic films such as walk the line, girl interrupted (my favorite), and Once upon a time in Hollywood.

I had the privilege of chatting with Phillips about his creative process on DWD, from drawing the visual references of the 50s to creating the look of each character. She alone can make a patriarchally driven but disturbingly perfect society as ravishing as it has been thanks to her flawless designs. Not to be dramatic, but the looks were pretty iconic, and I’m pretty sure these suits will be talked about for decades to come. Oh, and don’t worry, darlings. There are no spoilers ahead.