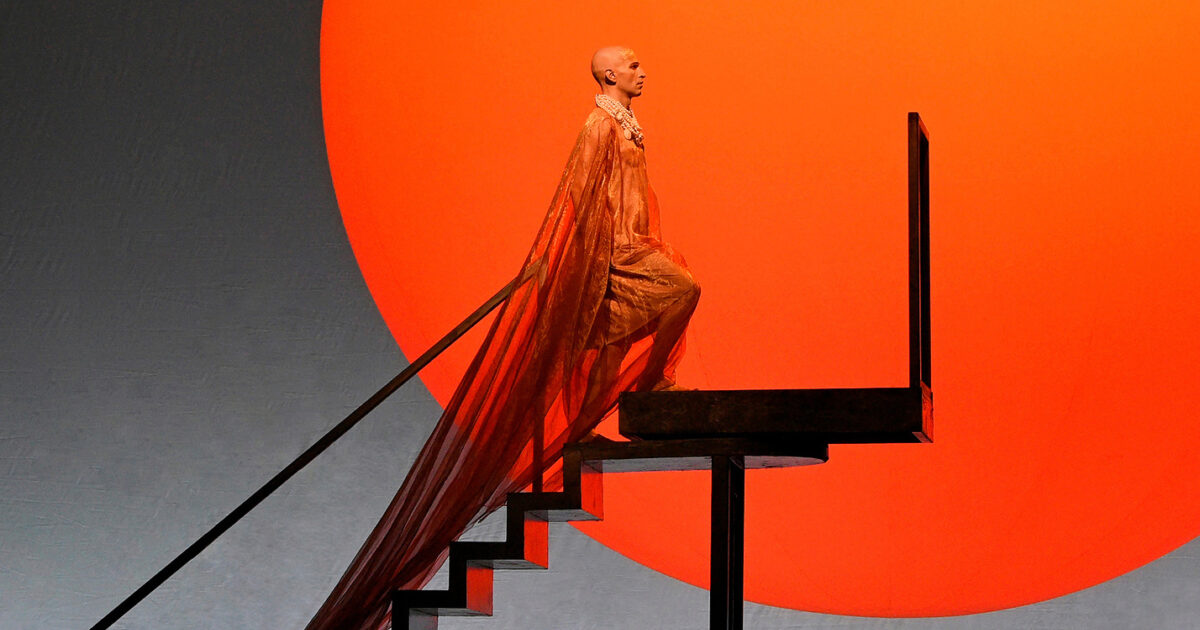 On the eve of the revival of the Metropolitan Opera’s landmark production of Glass’s work, the opera star reflects on his defining power over his career.

As I write this, I’m sitting on a plane returning from the Grammy Awards, where I was just presented with one of those chunky gold chunks praising our live recording of Akhenaten at the Met. Rarely, if ever, in the life of an artist is there a project, a role, that merges the experiences and skills you have accumulated and channels them into a single practice. If this project then connects with people in a deep way, it is truly life changing.

When I smelled the cold metal of the reward, a memory came to my mind of the first time I set foot on the cold brass floor of the throne room of the three-tiered hieroglyphic diorama. by Tom Pye. I was in rehearsal at English National Opera, where we premiered Phelim McDermott’s extraordinary production. In this golden room where my character is crowned pharaoh, I have no lines to sing. How could I convey the fear, the excitement, the vulnerability, the vision of a young man about to change the world with his revolutionary ideas? Phelim encouraged us to explore four different qualities of movement taught by theater guru Michael Chekhov: shaping, flying, floating and radiating. Casting, for example, should feel like moving your hand through the air if the air was made of molasses. After walking through the throne room, with Glass’ musical meters of three and four swirling around me, and Sean Gandini’s juggling balls crossing my field of vision like magnified atomic particles, I began to unlock the answer how I could make Akhnaton’s thoughts speak. The physical sensation of resistance merged my body with the dark weight of Glass’ violinless score, and simultaneously allowed my mind to relax enough for some sort of clarity to emerge.

I realize I sound like someone who just got back from a Zen retreat, but when I was a kid on Broadway doing theater in New York, I had a similar feeling. when I realized intuitively that I couldn’t try my hardest to shape the audience. attention, but instead had to develop instincts about how people react to a performer’s honesty on stage. The mental clarity that the Phelim technique offers, by occupying your body with a finished task, makes this kind of candid self-expression possible, like the laser beam from my eyes to every seat in the house.

On stage, as I’m about to open my mouth and sing in ancient Egyptian, I climb dangerously up the stairs in heavy gold paraphernalia – 40 pounds, to be exact – and ponder how I can convey the meaning with the sound, since nobody speaks ancient Egyptian and the production deliberately avoids the translation of the ancient text. The human voice exists in a liminal space between the voluntary and the involuntary – we can’t tell exactly what to do with the over 60 muscles that control voice function. The only way to shape and color your tone is through imagination. For example, if you inhale and imagine that you smell a rose, your soft palate (the skin at the back of your throat) will magically lift. I had to find images that prompted a constellation of sounds that could combine to tell a story.

In a quest to amass a quiver of images, I went to talk to Oxford Egyptologist Richard Parkinson and amateur Egyptologist (and famous filmmaker) James Ivory. Richard showed me the original soft-grained watercolors that Howard Carter painted of Tutankhamun’s tomb when he discovered it exactly 100 years ago this fall. I wanted Akhnaton’s “Hymn to the Sun” to have no rough edges and glide like his brush on paper. James spoke of Akhnaton’s crown with its flint brilliance and complicated geometry, and I wanted to match the shimmering beauty of the crown in the timbral steel I could muster to rival the brass in the pit. Combining these ideas with real-life vocal approaches, I worked first with my voice teacher Joan Patenaude-Yarnell and then with bandleader Karen Kamensek to find Akhnaten’s voice.

The entire cast and creative team worked in a similar fashion to create a show that was a hit when it premiered in London. But it wasn’t until three years later, when we performed this show at the Met, that we soared to apotheosis. We worked together to create buzz, invent engagement, education and marketing strategies that engaged my entrepreneurial spirit, and the show sold out. My procrastinating friends called me complaining that they had to go to Stubhub and pay over $1000 for a single ticket. When all of these people sat there, absorbing the synthesis of our years of painstaking work and the spontaneity of a live performance, it was as if we were somehow releasing ancient spirits upon them. More thrilling to me than the shouting, standing ovations at the end of each performance were the sacred and exceedingly rare seconds of breathless silence just after the curtain fell. I stood behind that curtain, imagining that each had just experienced their own sort of lucid dream that was wonderfully distinct but connected to everything ours was on stage.

As the weight of that Grammy shifted into my hands and I heard the cheers of the audience in a Las Vegas ballroom, I was filled with joy not only because of the recognition that that loud roar represented, but because I knew that soon I would hear those few more seconds of silence when Akhenaten returns to the Met.

Akhenaten is on arrange May 19–June 10. For more information, visit metopera.org.