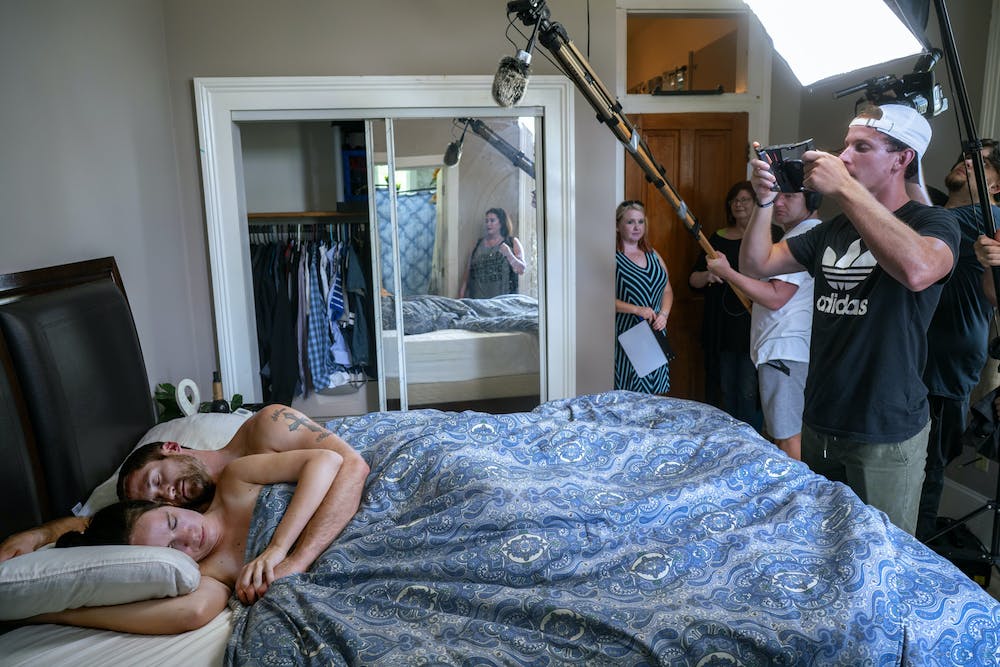 The “South” is an evolving concept with an apparent dichotomy of stories. In 1874, Atlanta Constitutional Editor Henry Grady coined the term “The New South”, attempting to distinguish the area from its roots. But with a history steeped in racist institutions and shaped by an uneven sense of progress, many Southerners struggle to understand where they call home.

In his most recent project, photographer Alex Harris captured film sets in the American South, exploring the role of storytelling and perspective in our perception of reality. Working alongside his wife, photographer and designer Margaret Sartor, he compiled the images into a exposure for the High Museum (November 27, 2019 – May 3, 2020) and a book called “Our Strange New Land”. The work was part of the museum’s collection “Imagining the South” project: to commission “a current look at the subjects and themes of the South while constituting the collection of contemporary photography of the Museum”.

Harris’s inspiration for the work came more than a decade before. Harris was invited on the set of Steven Soderbergh’s biopic “Che” in 2007. There he was given complete freedom to photograph the filmmakers and actors.

“I was struck by how real it was for them and how committed they were,” Harris said. “What a great experience for a photographer. I could get closer to the so-called action.

Working with 41 independent Southern filmmakers, Harris experienced a unique ability to capture the intimacy that is often disconnected by photographing real-life moments.

“It would take me months, if not years, to be part of a community,” Harris said. “Whereas, on a film set, once [I was] accepted as a crew member, I was allowed to photograph anything I wanted[ed].”

When creating the book, Harris and Sartor were tasked with digging through the thousands of images to create an open-ended narrative. The book opens with sketches of film scenes to immediately remind the viewer of the imaginary world they are about to experience. According to co-editor Sartor, “If you watch the opening sequence, it tells you that you’re entering a new world, pulling back the curtain. The book tells its own story.

The title itself emphasizes the element of imagination and the importance of perspective. Harris had first seen the college history book that became his title in one of the sets he photographed. It depicted the history of American colonization through the perspective of the Puritan settlers, leaving out the native voices that had existed there for centuries.

Harris writes in his afterword: “‘Our Strange New Land’ has become the title of this book, a phrase I have attempted to reverse, to indicate new and different stories of life in the South told by contemporary filmmakers. ”

When exploring the book itself, photographs are carefully juxtaposed, film scenes placed alongside to create contrast in our imagination. Others show the thin veil between the emotion on stage and the camera itself. While intimacy itself carries its own legitimacy, we are reminded, as viewers, that there is a frame to every moment. The pages unfold to allow the viewer to completely escape into the narrative world that Harris and Sartor created with the help of dozens of filmmakers. It has a simultaneous layer of intentionality coupled with the freedom granted by the viewer’s own imagination.

Although, as Harris asserted, photographing film offered a new sense of freedom in intimate emotional expressions, the editing process brought to light new ethical considerations. Her daughter was brought onto the project to review the footage and cut out any that were deemed too upsetting.

“We became amazed to rethink our childhood and what we were taught about our history, especially as Southerners,” Sartor said. “It was so great to have the perspective of a 25-year-old because she lives through what these images mean, especially images that deal with the police and the Antebellum South.

Inspired in part by the conclusion of that work and revisiting decades of photography, Harris’ next project will chronicle his own family.

“What I’ve done is go back to my archive of photographs over the years. One of the things I’ve photographed the most in my life, but haven’t shown, is our family,” Harris said. “My goal as a photographer was to step into a world where I could photograph life in a way that was meaningful and intimate and where I was part of the story in some way. another one.”

Curtain to fall on Lossiemouth Theater

5 Affordable Ways to Bring Luxury Interior Design into Your Home