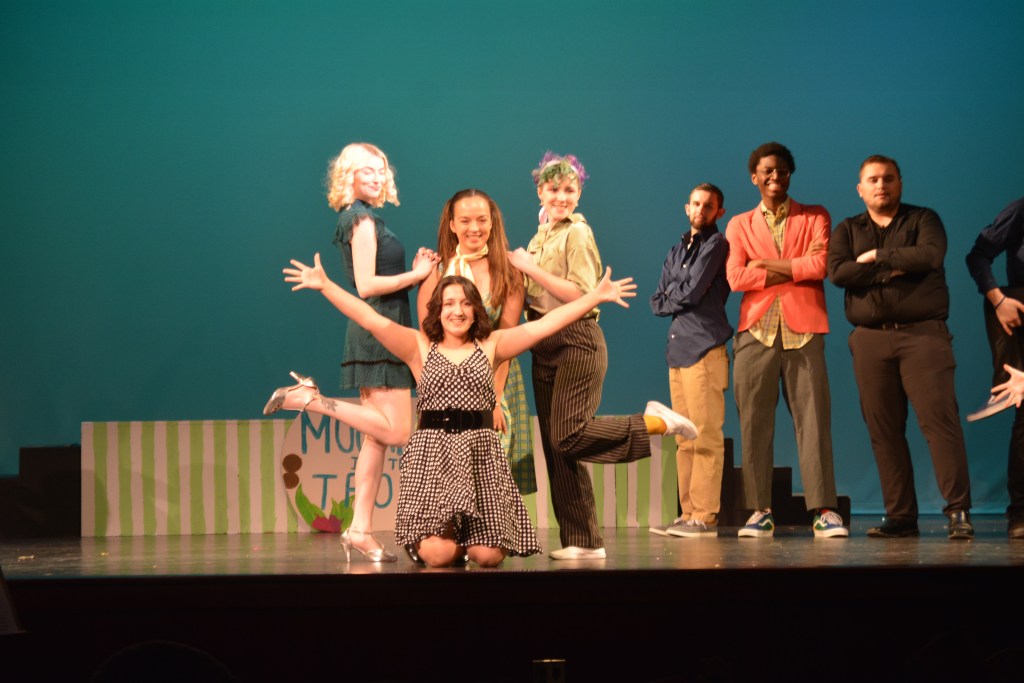 As the final scene drew to a close and the audience cheered, the actors could finally breathe. They did, the show was over.

After rehearsing for at least two hours every day, putting their heart and soul into the production, the weekend passed quickly. For the seniors, it was their final curtain call – a bittersweet moment they knew was inevitable, but wished never would come.

The Best of Broadway club performed its spring production of “Grease” last weekend, and seniors Jess Darby and Brendan McGann took the stage for their theatrical finale.

McGann starred as Kenickie, one of the main characters, and Darby took on the role of Eugene, his first speaking role.

The couple had a different experience from the rest of the cast, knowing they wouldn’t be returning in the fall to start another Best of Broadway year.

“It was my main extracurricular involvement, I always put a lot of time and effort into it,” Darby said. “My sophomore year, I directed, I’ve choreographed the last three years, so it’s just leaving that’s going to be really weird.”

Although Darby and McGann are ending their Best of Broadway experiences together, their journeys to get there have been very different.

Darby danced for much of her life as she competed with a studio and her high school team. She also loved to sing and found that performing in musicals would allow her to do both of those things at Springfield College. Darby joined Best of Broadway with no theatrical experience and fell in love with it early on.

“I wasn’t even going to audition, but on the last day of freshman auditions, someone I barely knew dragged me into this,” Darby said. “I made so many friends with the club that I was like, ‘Oh, that’s really fun. “”

McGann began acting classes in third grade and was in her first play the following year. He started performing in middle school musicals and was in the drama club throughout high school. However, once he arrived at Springfield College, he didn’t join Best of Broadway until his sophomore year.

“When I came here, I didn’t really know anyone, so I didn’t join my first year. But my sophomore year, I wanted to get into it because I missed it, and I auditioned and they took me under their wing, so that was awesome,” McGann said.

From there he never looked back as he became a key member of the club and worked hard to put on a show worth showing to the community.

“At the end of the last show, at the end of when I sing, I give my all – my everything. Show everyone you love doing what you do and just give them a show,” McGann said.

Neither Darby nor McGann are pursuing musical theater careers in the future, so Best of Broadway has been their outlet for their creative and artistic sides. Darby majors in psychology with a minor in criminal justice, while McGann majors in math and computer science.

Best of Broadway served as their community – a family. The friendships they have made are unique and they have been able to connect with peers the duo might not have encountered otherwise.

The bonding experience is something they treasure. After the completion of the final show, a reflection on their time with Best of Broadway centered on the chances of spending time with other cast and crew members.

“We had a full cast bonding night at the theater just before tech week started…just a reminder that we still love and support each other and can have fun,” Darby said. “It was probably the most fun I’ve ever had at the theater.”

Darby and McGann have finished their acting careers and will be forever grateful for the Best of Broadway experience. As the curtain has closed on their time in the theater, the memories will last forever.