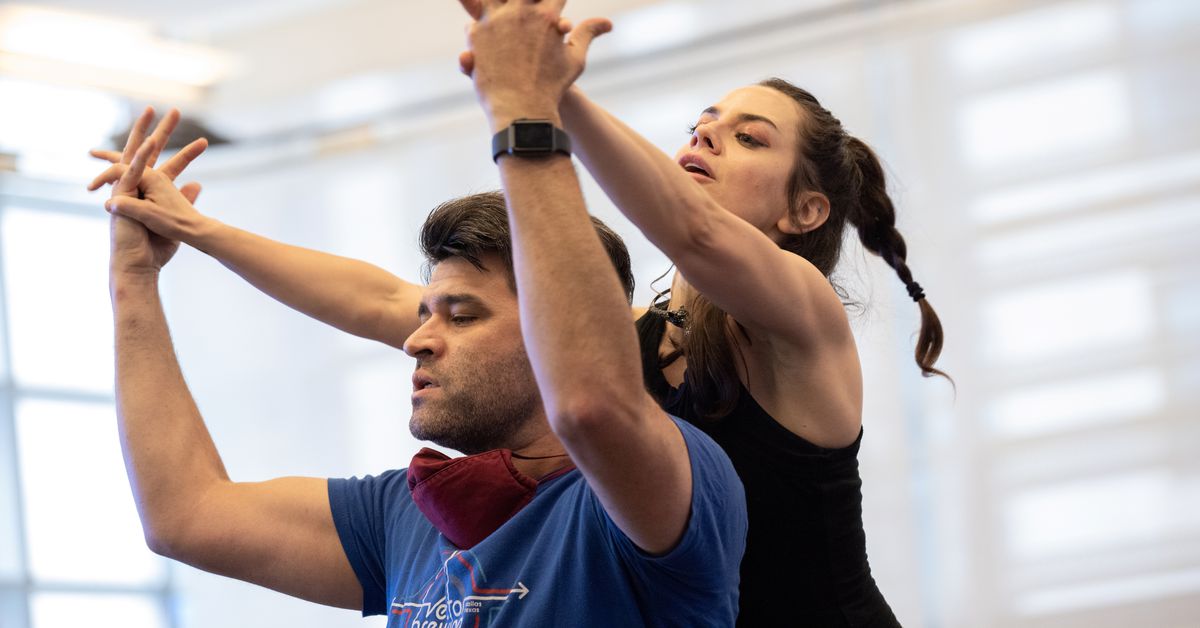 NEW YORK, October 24 (Reuters) – Meghan Picerno was back to work after 18 months of pandemic limbo, thrilled to sing and dance with her fellow “Phantom of the Opera” classmates again as they rehearse for the return of the Oldest Broadway Show.

As the musical reopens at the end of October, all Picerno could think of was sometimes going to the first recall unscathed from the groundbreaking cases of COVID-19 that had sidelined the actors vaccinated during the event. other shows.

Outside of long days in a cold mirror-lined rehearsal studio near Times Square in New York City, Picerno had recovered to what she called lockdown.

â€œI’m a full-fledged monk now,â€ she said during a rushed lunch break between two consecutive passes.

Crowded Broadway theaters, vital to the city’s tourism industry, were the first places to shut down by the New York government as the coronavirus began to ravage the state. News of the abrupt shutdown came on a â€œPhantomâ€ morning at the Majestic Theater on March 12, 2020, as some of the cast and crew themselves fell ill.

Now, after an unprecedented shutdown, theaters are among the last workplaces to reopen. Their return this fall is seen as a test of the city’s efforts to restore a new sense of normalcy.

Reuters watched the “Phantom” company prepare for its comeback. The pandemic has left unmistakable traces.

Weeks after the series fell, COVID-19 had claimed the life of a beloved dresser, Jennifer Arnold, who had been on the series for more than three decades.

After protests filled the streets of the United States last year, outraged by the murder of George Floyd, a black man, by a white policeman, the newly unemployed on Broadway pushed the industry to make overdue changes to increase racial diversity in theater companies.

In August, the producers of “Phantom” announced that they had chosen the very first black actor to play Christine since the show debuted on Broadway in 1988. The actress, Emilie Kouatchou, would make her Broadway debut as a replacement. by Picerno.

For the returning cast, there were lyric and directing adjustments to learn, which made it easier to choose non-white actors in the lead roles. The whole company had to be vaccinated and twice a week she would have her nose swabbed in a nearby theater hall converted into a temporary coronavirus testing site.

Picerno said she was happy to embrace whatever it takes to get back on stage.

In the dark days of 2020, living in North Carolina with her parents and claiming unemployment benefits, she said she “almost felt like a failure.” She sang her part every day to keep it fresh in her mind until the singing made her too sad and she stopped.

The emotion overcame her again on the first day she reunited with her casting mates at the end of September. Composer Andrew Lloyd Webber had come through the studio to give a pep talk to the actors before they sang through the familiar score.

Picerno’s singing dissolved into tears during the love duet “All I Ask of You”.

â€œSing! Help her! The conductor urged the masked choir, whose voices carried Picerno until she regained her composure.

A few days later, the actors performed dance steps in a mix of street clothes and the bulkier parts of their 19th century style costumes.

Picerno pulled a scarf through her fingers as she danced and sang “Think of Me” in her bell-shaped soprano. In a corner of the studio, Kouatchou silently reflected each of Picerno’s movements.

Kouatchou, daughter of Cameroonian immigrants, grew up in the suburbs of Chicago. “Phantom” was the first Broadway show she had ever seen, while traveling to New York City with her high school. She remembers being stabbed by Christine.

“I could sing that part in my sleep,” she recalls thinking.

Still, she worried about stereotypes, that some would see a shift in her voice, an opera soprano, and her appearance, which was not the kind of “little white girl” who always seemed to be seen as one. ingenuous or the heroine of a show.

COVID-19 had both shaken up live theater and made room for progress.

â€œThe pandemic has been terrible,â€ Kouatchou said. “But we wouldn’t be able to have conversations like this and change things like this if it weren’t for the pandemic.”

Now, as the Phantom begins to make his terrifying presence known in Act 1, a frightened ballet dancer turns to the heroine and sings, â€œChristine, are you okay?

Before the pandemic and the casting of Kouatchou, the words had always been: “Your face, Christine, it’s white!”

The creepy old Christine doll that stood in the ghost’s lair, her features unmistakably white, was also out. A new doll, designed to be racially ambiguous, would debut on the night of the reopening.

Later in the week, Kouatchou got a first glimpse of one of Christine’s new wigs designed to match the texture of her hair.

‘THE POINT OF NO RETURN’

On the first full day of onstage rehearsals at the Majestic Theater, cast members waited to show proof of vaccination in a trash-lined alleyway leading to the stage door.

Backstage, masked dressers that help actors quickly change costumes in the darkness of the backstage were testing alternatives to the bitten lights they had grabbed in their teeth before the pandemic. They experimented with small lamps strapped to their foreheads or on gloves, hoping they wouldn’t disturb the audience by projecting beams of light across the stage in the middle of the show.

From the seats of the orchestra, John Riddle, who plays the hero of the show Raoul, marveled at one of the dazzling spotlights at the top of the proscenium. Its beam illuminated a “constant cloud of dust,” he said.

â€œThe fact that it’s clear now means something to me,â€ he said. “They say it’s the cleanest a Broadway theater has ever been.”

Even so, there was disturbing news from nearby broadcasts. The Disney musical â€œAladdinâ€ was forced to close for two weeks shortly after it reopened in September because too many actors tested positive for the coronavirus.

Maree Johnson, who plays the black-clad ballet mistress Madame Giry, said she was resigned to the likelihood that “Phantom” would register groundbreaking coronavirus cases as well.

“It’s going to happen sooner or later,” she said.

Nine days later, Friday afternoon, Picerno was in her dressing room when she opened the email with the results of her last coronavirus test before reopening night. Relief washed over her. It was negative.

That night, spectators clad in evening gowns, bow ties and the occasional “Ghost” style costume stormed the doors of the theater, searching for evidence of vaccination.

â€œWelcome to Broadway! Newly hired COVID security monitors tweeted who waved large signs saying “MASKS UP” to the public inside.

Backstage at the top of a staircase, a few members of the company had placed a vase of flowers and a photograph of Arnold, the chest of drawers lost due to COVID-19. Some of the cast and crew stopped near the memorial before resuming the last-minute run in the nearby locker rooms.

The lights in the house went out and the familiar descending chromatic chords of the “Phantom” theme sprang from the orchestra pit. Picerno danced across the stage as Kouatchou watched the audience, sometimes mimicking his hand gestures. The new Christine doll was hiding in the Phantom’s lair, her face now silver.

At the last encore, the audience roared with joy. Picerno ran to the front of the stage to greet, his face crumpled and shining with tears.

BOSSICK: What a show for ‘Clue’ of the WSCC | David Bossick – The Pitch