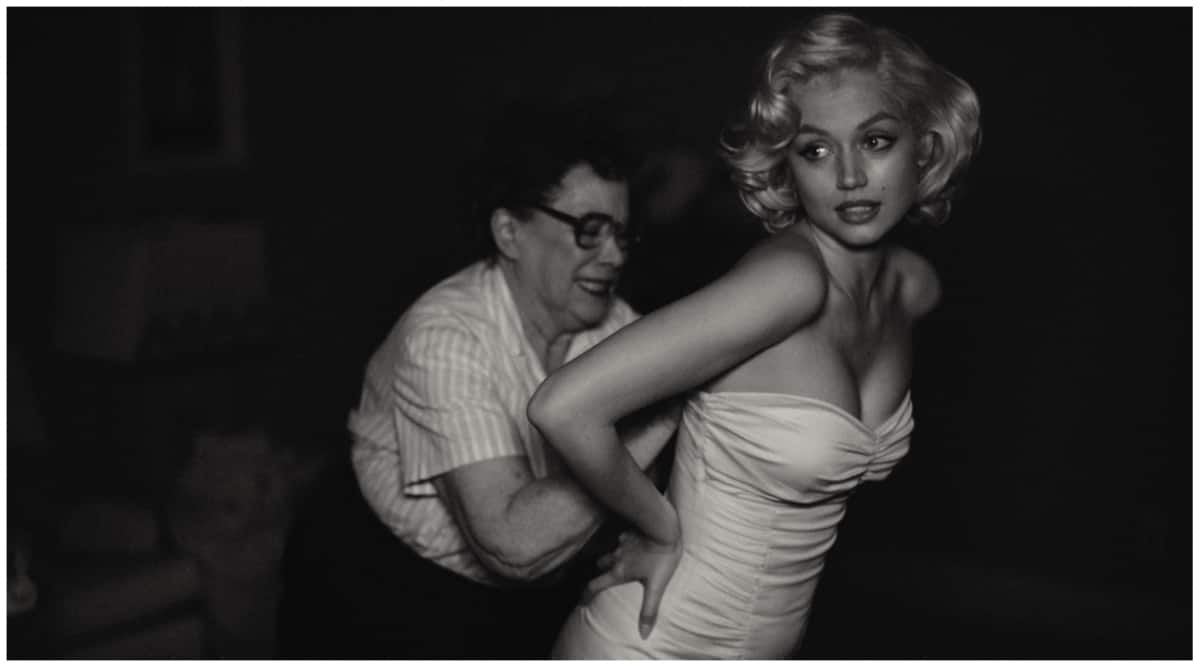 Writer-director Aaron Sorkin often likes to describe his films as paintings and not as photographs. Facts, he seems to say like so many others before him, should not stand in the way of a good story. But Blonde, director Andrew Dominik’s fragmented fable about the myth of Marilyn Monroe, is neither a painting nor a photograph – although much of it looks like stills from Life magazine that come to… well, life. It’s a puzzle, and abstract too. It’s a mood piece, a symphonic poem, and in a year that gave us the unbearable Elvisit’s a wild cry of dissent against stereotypical Hollywood biopics.

But comparing the complex blonde with something as self-parodic as Elvis would do the film a disservice — Dominik’s second, if not third, on the cost of fame and the fickleness of fame. Blonde shares several thematic similarities with the filmmaker’s 2007 classic The Assassination of Jesse James by the Coward Robert Ford. If that movie was a meditation on celebrity made to cosplay as a revisionist western, Blonde is a meditation on celebrity culture that channels Ari Aster and David Lynch’s elevated horror films. Nobody sings Happy Birthday Mr President here, although the President gets a…happy ending.

Abandoning plot in favor of humor, Dominik assembles a tapestry of events from Marilyn’s life, beginning with her abusive childhood with an alcoholic mother, and moving on to a series of encounters with men who ranged from outright abuse to moderate exploitation. Blonde is truly a #MeToo movie that presents Marilyn and her daddy issues as an archetype.

Dominik experiments with aspect ratios and film, color and black and white, while exploring both sides of his protagonist’s personality. And it takes a while to acclimatize to the film’s inhospitable temperature – it opens with a haunting sequence in which young Marilyn’s mother leads them straight into the flames because she wants to see “the hell of close”, and then gets busy by subjecting Marilyn to a series of nightmarish intrusions into her life. At one point, believe it or not, Dominik and his cinematographer Chayse Irvin’s camera puts us right inside her cervix. But later, they apparently make up for it by making a drugged Marilyn vomit directly on the lens, ostensibly on you and me.

This is a deliberately provocative film, a nearly three-hour epic that tests the limits of endurance not just physically but also psychologically, and will likely offend audiences expecting a more conventional experience. Determined to put an end to the generational trauma she inherited from her mother, Marilyn is in conflict between the desire to have a child and give her the life she never had, and the fear of ending up giving her the life she actually did. Dominik visualizes her many pregnancies and terminations via expressionistic CGI fetuses, floating in utero. It’s exactly as weird as it sounds, and another example of how the film gets into her personal space, this time literally invading her body.

But it is not an exploitation film. Marilyn’s perspective never changes; the film never leaves her. In moments that could be perceived as dehumanizing, Dominik’s camera focuses its attention on Marilyn’s face. He’s not going to honor the abuse by showing it on screen; he only cares about how Marilyn feels, as he implores viewers to look her in the eye and stay until the end. Practically speaking, there are only three instances in the film where Marilyn seems truly happy. In the most memorable of these sequences, she frolics on the beach with playwright Arthur Miller – her third husband – and discovers she is pregnant, as Nick Cave and the Bad Seeds pass out.

Dominik also reclaims some of the most iconic moments of Marilyn’s life from the perverts and paparazzi who created them. Pulling back the curtain on this famous photo of her in the white dress, the filmmaker reveals that it was staged as an outdoor ogle party where thousands of frantic men nearly stepped on their feet to catch a glimpse of her skirt. And then there’s the remarkable ending. Dominik gave the death of Jesse James an almost tragic sense of opera, but it was he who blamed the actions of another man, the “coward” Robert Ford. In Blonde, he is aware of his complicity. After spending more than 150 minutes a few centimeters from her face, he films Marilyn’s last moments from a respectful distance. The camera in the final shot gives the impression of being physically removed from its tripod and placed on the ground, as if the filmmaker were saying: “The show is over. Go home now.”

And through all the indignities and insecurities, Ana de Armas remains unflinching. It’s not just a performance, it’s a possession. De Armas has somehow summoned the spirit of Marilyn Monroe herself to take control of her body, and the results are breathtaking. Her voice has that alluring breathlessness that could weaken your knees, and the costumes and hair certainly add to the effect. But a great way to judge a performance is always through the moments when the actor has nothing to work with — no co-stars, no lines, no drama. And in those moments of silence, it’s impossible to look away from de Armas. She makes the brilliant choice to play Marilyn as a Brothers Grimm heroine, trapped in a world full of big bad wolves. An Oscar would be too insignificant an honor for what she has accomplished here.

Salvation was still in sight for Marilyn Monroe, beyond the wall of salivating men. But it was never within reach. She chased him, she stalked him, she followed his every move. But she could never reach him. Almost as if the salute itself was a celebrity.