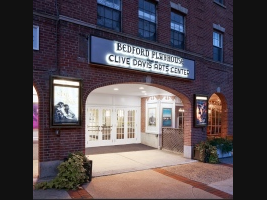 BEDFORD, NY – The Bedford Playhouse has big plans for a big anniversary.

After it closed in 2015 due to needed repairs, a grassroots campaign resurrected the Playhouse in its present form as a modern community gathering place and cultural center. Today there are three theaters, a café, a 36-foot screen, state-of-the-art Dolby Atmos surround sound technology and leather seats.

“It’s all about experience,” Bedford Playhouse manager Michael Hoagland said in an announcement of the festivities. He added that the Playhouse “consistently delivers top-notch programming in a terrific space.”

The 75th anniversary celebration begins this weekend, nearly 75 years to the day since the Bedford Playhouse first opened as a single theater facility. There will be three nights of exclusive events to celebrate “75 years of community inspiration and world-class programming”.

On Friday, April 8 at 6:00 p.m., there will be a chic Parisian-style welcome reception with themed cocktails and complimentary hors d’oeuvres before the 8:00 p.m. screening of the Oscar-winning classic “An American in Paris.” Participants are encouraged to dress in their “best French”. There will be music, dancing and discounted drinks, starting at 10:00 p.m. Tickets can be purchased here.

On Saturday, April 9 at 7:30 p.m., famed medium Thomas John will channel and deliver messages from “spirits on the other side.” Tickets are available here.

In honor of the Playhouse’s 75th anniversary, the organization is asking the community to consider donating to the Bedford Playhouse, a nonprofit that relies on donations from the community. The goal is to raise $75,000 by April 10. Additional information on donations and a way to donate online can be found here.