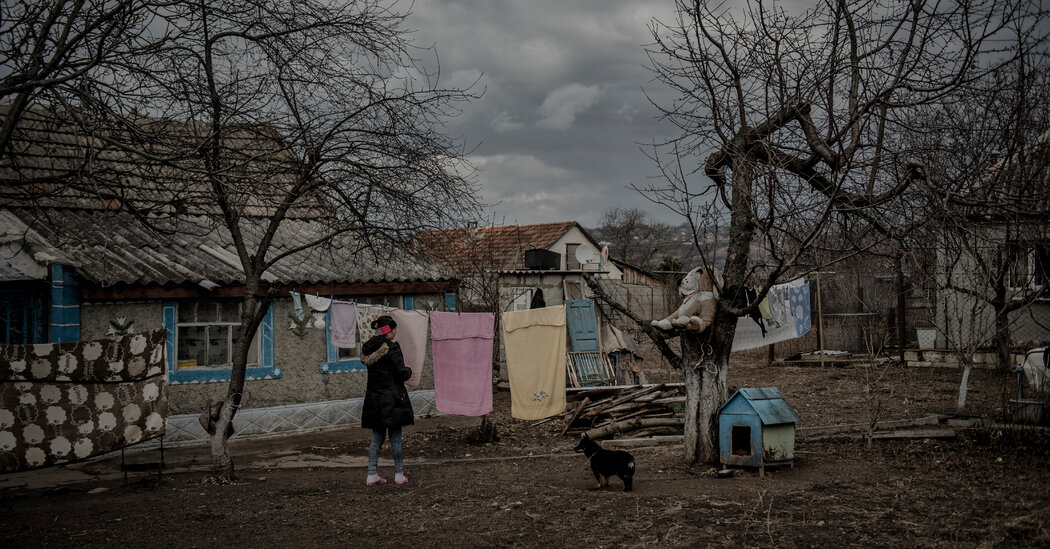 At the Ukrainian border, the Moldovans wonder: where will Putin stop?

ON THE DNISTRA RIVER – Just eight miles from the Ukrainian border, the mayor of a village in Moldova watched TV coverage of the Russian invasion next door. He played with a pen, removing and replacing its cover, staring at the screen as it showed the Russian advance towards Odessa, the nearest major city on the Ukrainian side.

“I can’t stop watching,” Mayor Alexander Nikitenko said. “If they take Odessa, it is clear that they will come here next.”

And if the Russians went that far, Mr. Nikitenko wondered, would they necessarily stop?

Such questions are being asked all over Eastern Europe in former communist republics like Moldova. The Russian invasion of Ukraine has shattered assumptions about the post-Cold War order, providing clear evidence that Russian President Vladimir V. Putin sees Europe’s borders as likely to be redrawn by force .

A poor country of 2.6 million people wedged between Ukraine and Romania, Moldova is perhaps the most vulnerable. Unlike Poland and the Baltic States, Moldova is not a member of NATO. It is also not a member of the European Union, but submitted a rushed and drawn-out request last week, which is akin to sending out a flare.

More problematically, two decades before Russian-speaking separatists carved out a slice of Ukraine, they did the same in Moldova.

In 1992, Moscow-backed separatists took control of a 250-mile thin strip of land, known as Transnistria, which runs along much of the eastern bank of the Dniester as well as parts of the western bank.

They also lay claim to pockets of land still controlled by Moldova, including Mr Nikitenko’s village of Varnita.

Transnistria has never been recognized internationally, not even by Russia. But Russia is keeping 1,500 troops there, nominally to keep the peace and guard a huge cache of Soviet-era munitions.

If Russian forces advance towards the Moldovan border, some Moldovans fear that Russia will soon recognize Transnistria, just as it did with the self-declared breakaway republics of Ukraine – giving Moscow a similar pretext to officially occupy it – and perhaps even later absorb it into either a pro-Russian Ukraine or Russia itself.

Arrows on a map of Ukraine presented during a televised conference Report about the Russian invasion last Tuesday Belarusian President Aleksandr G. Lukashenko suggested that Russian troops in Ukraine planned to enter Transnistria after capturing Odessa. The Belarusian ambassador to Moldova later apologized for Mr Lukashenko’s card, saying it was a mistake.

“But of all the countries except the aggressors themselves, Moldova is the closest country to military action,” Flenchea added.

Although small and poor, Moldova has always been an indicator of power dynamics in Eastern Europe. In just over two centuries, the country has been part of the Ottoman Empire, the Russian Empire, the Kingdom of Romania and the Soviet Union.

Along the Dniester River, this complex history, coupled with the volatile nature of the current moment, has raised expectations of a power shift to come.

The Dniester could now become the border between Russia and the West, said Sergei Shirokov, a Transnistrian-based political analyst and former Transnistrian official. “Will this border be an iron curtain? Mr. Shirokov asked. “Or will it be a flexible border?

Josep Borrell Fontelles, the European Union’s top diplomat, visited Moldova last Wednesday in a show of support, while Antony J. Blinken, the US Secretary of State, visited on Sunday.

“We strongly support the territorial integrity of Moldova,” Blinken said during a joint press briefing with Moldovan President Maia Sandu.

In the short term, some have speculated that Transnistrian forces or Russian troops in Transnistria might be drawn into the fighting themselves, to aid the Russian campaign in southwestern Ukraine. On Friday evening, a news agency run by Transnistrian authorities said a missile hit a Ukrainian railway line near Transnistria, highlighting the risk of military overreach. On Sunday, a TV channel run by Ukraine’s Defense Ministry claimed that recent Russian strikes on a Ukrainian airport were fired from Transnistria. The Moldovan government and the Transdniestrian authorities have denied this information.

As late as Sunday morning, Moldovan officials and foreign diplomats said there was no evidence Transdniestrian leaders were seeking involvement in the fighting. Ms Sandu, President of Moldova, said on Sunday that the Russian invasion had left the country feeling unsafe. But she and other Moldovan officials have otherwise tried to avoid stoking tensions. In last year’s parliamentary elections, around a third of Moldovans voted for pro-Russian parties.

In an interview, Moldovan Prime Minister Natalia Gavrilita said her government faced more pressing challenges, such as the sudden influx of more than 230,000 refugees. There are almost no free hotel beds in Chisinau, the Moldovan capital, and many refugees are staying in makeshift camps and with ordinary Moldovans.

“We are a neutral country, we have always acted through the prism of neutrality, and we fully expect others to do so,” Ms Gavrilita said. “We see no imminent danger” of Transnistria joining the war, she added. “That is, for now, a hypothetical question.”

In recent public statements, however, Transnistrian leaders have sought to downplay any tension.

Any report of Transdniestrian aggression was a ‘barefaced lie’, Mr. Krasnoselsky said in a statement on Sunday afternoon. Transnistria “does not represent a military threat, does not harbor aggressive plans”, he added. “We are focused on securing peace.”

As Transnistria seeks independence from Moldova, the two have established a working, if difficult, relationship.

Transnistria has its own flag, complete with a Soviet-style hammer and sickle, and its own makeshift currency which consists in part of plastic coins reminiscent of a board game. At the local level, Moldovan and Transdniestrian communities are often interdependent, and Transdniestrians often use banks and medical centers in Moldovan-controlled towns.

Any disruption to the status quo would risk disrupting trade and food supplies for Transnistria, much of which depends on Moldova, Ukraine and the European Union. It could also jeopardize one of Transnistria’s main sources of revenue – the royalties it collects from Moldova for the electricity Transnistria supplies to Chisinau.

“I want Transnistria to be independent,” said Anastasia Secretariova, a 31-year-old housewife waiting in line. “But what Putin did made everything worse.”

Ms Secretariova’s heart sank at the thought of her 3-year-old twins growing up to fight in “an aimless war”, she said. Her friends enlisted in local Russian-led forces also have little appetite for more fighting, Ms Secretariova added. “They just want to live in peace.”

Ultimately, however, the people of Transdniestria will have little say in what happens here, said Mr. Shirokov, the Transdniestrian analyst and former official.

“The Eurasian continent is being reshaped,” Shirokov said. “Whether Russia alone is reshaping our future, or both Russia and America, we don’t know. But what is clear is that it will not be our own hands that will influence things.

Regardless of what happens in Ukraine, Russia could still seek to preserve the status quo in Transnistria, a Moldovan official said. A Transnistria that remains part of Moldova could be more useful to Russia, as it would continue to complicate any Moldovan aspiration to integrate with the West, the official added.

And whatever happens in Transnistria, the war in Ukraine will pose a host of challenges for Moldova, said Moldovan Foreign Minister Nicu Popescu.

The conflict has already ruined Moldova’s eastern trade routes and presented it with a refugee crisis that would drain far more developed countries, Popescu said.

In the longer term, this will lead to a proliferation of weapons across Eastern Europe, aiding organized crime networks and undermining investor confidence, while the cost of reconstruction will also drain international funds.

“The war will cause at least a lost decade,” Popescu said. “Not just in Moldova, but in the whole region.”

But in the office of Mr. Nikitenko, the village mayor, even the idea of ​​an independent Moldova seemed far too optimistic.

Mr. Nikitenko still hoped that the Russians would stop at the Dniester.

But he feared they would push west to the Prut River, on Moldova’s western border with Romania.

“You can’t rule it out,” Mr. Nikitenko said, still fiddling with his pen. “If Putin wants to restore the Soviet Union, he will go as far as the Prut.”

The report was provided by Irina Perciun in Varnita, Moldova, Benjamin Novak in Budapest and Lara Jacques in Chisinau, Moldova.

Taron Egerton passed out on stage during Cock performance