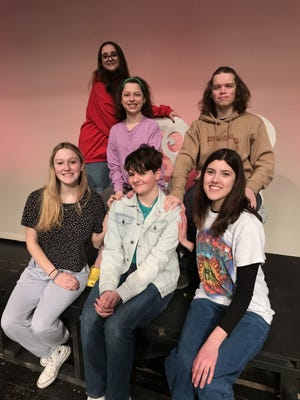 Amesbury High School Drama Club will perform “Once Upon a Mattress”

Want to put a smile on your face and a song in your heart? Head to Amesbury High School for the AHS Drama Club’s spring musical “Once Upon A Mattress,” a musical adapted from Hans Christian Andersen’s fairy tale “The Princess and the Pea.”

“It’s fun and a great show for all ages,” said director Mary Ellen Shirshac. “It’s an ironic fairy tale and I thought we needed something lighthearted this year. As the song goes, ‘They all lived happily, happily, happily ever after.’

The show will be presented at the AHS Auditorium on Thursday, March 31; Friday, April 1 and Saturday, April 2 at 7 p.m. Tickets will be sold at the door. Admission is $15 for adults and $10 for students and seniors. Masks are optional.

“Once Upon A Mattress” marked the Broadway debut of Carol Burnett, who originated the role of Princess Winnifred, when it opened in 1959. With music by Mary Rodgers, lyrics by Marshall Barer and book by Jay Thompson, Dean Fuller and Marshall Barer, the show received a Tony Award nomination for Best Musical as well as a Best Leading Actress nomination for Carol Burnett.

“We’re doing a scaled-down production this spring,” Shirshac said, “but it’s still a lot of fun. With COVID, we had to be flexible. We weren’t sure if we’d do it with masks on, and we have a smaller cast than usual. I’m doing the costumes and we’ve all painted the sets. I have a relative who can help me, but right now it’s just me and the rest of the cast.

In addition to Shirshac as director, Susanne Meyer is on board as an advisor and producer for the AHS Drama Club, and Joelyn Pray is the show’s choreographer.

“The show is really funny,” Manclark said, “with a number of jokes adults will understand, but we’ve adapted it to suit all ages. It’s a cute story with a great message. about judging people by who they are.

Manclark has been performing in musicals since seventh grade. In addition to local broadcasts, he appeared in Portsmouth’s Prescott Park productions of ‘Peter Pan’, ‘Mary Poppins’ and Beauty and the Beast.

“‘Once Upon A Mattress’ is a comedy with very good songs,” he said, “and we have a very good cast.”

“She’s the prince’s overbearing mother,” Balaam said, “and she’s plotting with the wizard. She acts good on the outside, but on the inside she is evil. She is impetuous, loud, aggressive and very funny.

This will be Balaam’s 38th performance.

“I’ve been doing acting since second grade,” she said. “I plan to minor in theater at Wheaton College with a major in art history.

“’Once Upon A Mattress’ is a musical that few people know, but it’s very funny. It’s good for the whole family as there’s action, romance, comedy, something for everyone.

“I love to sing and act, and I’ve been in a drama club since fifth grade,” Landry said. “In ‘Cinderella’ I was one of the horses, in ‘Peter Pan’ I was the crocodile and I was a hyena in ‘The Lion King’.”

Landry finally graduated from human roles in eighth grade when he won the role of Genie in “Aladdin,” but that show was canceled due to the pandemic. This year, he is the male protagonist of “Once Upon A Mattress”.

“It’s an amazing show,” he said. “There is a lot of comedy and very good actors who are committed people. I like theatre. It’s a great environment.

After all, “when the curtain comes down, there’s nothing but love and laughter.”

Naples Garden Club Show is this weekend, what to know