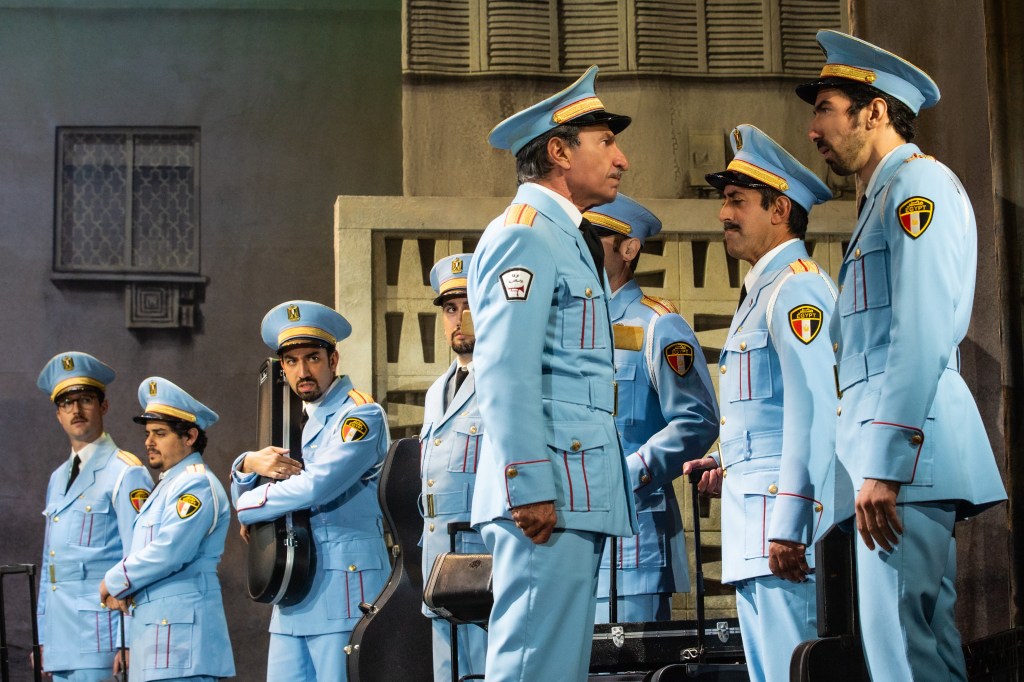 Acting shines in production of ‘Band’s Visit’ in San Francisco

The inability to pronounce the name of a city leads to the wrong destination and ultimately to one of Broadway’s most unlikely hits – “The Band’s Visit”.

Based on the 2007 Israeli film from the book by Berkeley native Itamar Moses, the musical is playing at San Francisco’s Golden Gate Theater through February 6. The off-kilter story follows an Egyptian ceremonial group who, due to mispronouncing the name of the city when buying bus tickets, end up in a tiny, isolated town in Israel.

The only bus that crosses the desert settlement will not return until the next day, forcing the group to spend the night. The town has no hotel, but luckily cafe owner Dina (Janet Dacal) finds accommodation for the band members among the townspeople, and what follows is a sweet and poignant story of friendship. between strangers who have trouble communicating.

Full of quirky characters – one stands in front of the payphone waiting for it to ring (Joshua Grosso), another can’t help but impersonate Chet Baker (Joe Joseph) – the show doesn’t include big production numbers but rather thoughtful solos and duets with one band member or another playing softly in the background.

The only time the whole band plays together is after the curtain call in a fast-paced number. Despite the beauty and nostalgia of the songs in the series, I would have liked an additional musical number or two.

Usually musicals are about the music, but in this case it’s the acting that shines, with Sasson Gabay (as a caring bandleader) and Decal (a melancholy café owner) creating a lovely friendship. under estimated. It doesn’t hurt that Dacal’s beautiful singing voice and David Yazbek’s music combine into haunting and vulnerable melodies. Other highlights include Joseph doing his Chet Baker impersonation from “Haled’s Song About Love” and the fun roller-skating sequence.

Also in SF: SF Playhouse wrapped its fabulous production of “Twelfth Night” early, but has extended its video-on-demand broadcast, with tickets available through January 29.

“We are so grateful to our incredible cast, musicians, staff, designers and everyone who made this production possible during this difficult time, as well as our beloved audience who made ‘Twelfth Night’ such a most successful and memorable shows in our 19-year history. We are truly touched by your support,” SF Playhouse co-founders Susi Damilano (who runs the show) and Bill English wrote.

The company’s next play, “Heroes of the Fourth Turning,” is still scheduled to begin preview performances on January 26 with opening night on February 2. For more information, visit sfplayhouse.org.

Set in 1957 Pittsburgh, Pennsylvania, “Fences” follows Troy, a former Negro league baseball star. Banned from the major leagues because of his race, Troy (Kirk Waller) has faced literal and figurative barriers for most of his life. Now working as a garbage collector, his bitterness affects his wife and son, who themselves dream of playing professional football. Disappointed with the way his life has turned out, Troy barely conceals his resentment at his son’s potential success.

Walnut Creek: Hope you haven’t had your fill of Charles Dickens with the many “Christmas Carol” productions over the holidays, as Synergy Theater continues the celebration with “Spontaneous Charles Dickens.” The completely improvised two-act comedy in the style of Dickens continues through January 23 at the Lesher Center for the Arts at Walnut Creek, 1601 Civic Drive. Call 925-943-7469 or visit lesherartscenter.org for tickets or more details.

Berkeley: Once again, I have the sad duty to announce another cancellation. Shotgun Players has canceled its production of “Babes in Holland” which was scheduled for January 21 through February 20 at Ashby Stage in Berkeley. The company hopes to produce the show in the future.

I can’t imagine the pain (not to mention the money) of repeating a show until tech week and then canceling it. Shotgun Players ticket holders will be contacted by the ticketing manager. If not, call 510-841-6500.

The Aurora Theater in Berkeley has also postponed its upcoming world premiere of Jonathan Spector’s “This Much I Know.” The show, which had just started rehearsals, will now be produced in September. If you have tickets and haven’t been contacted by the box office yet, email [email protected]