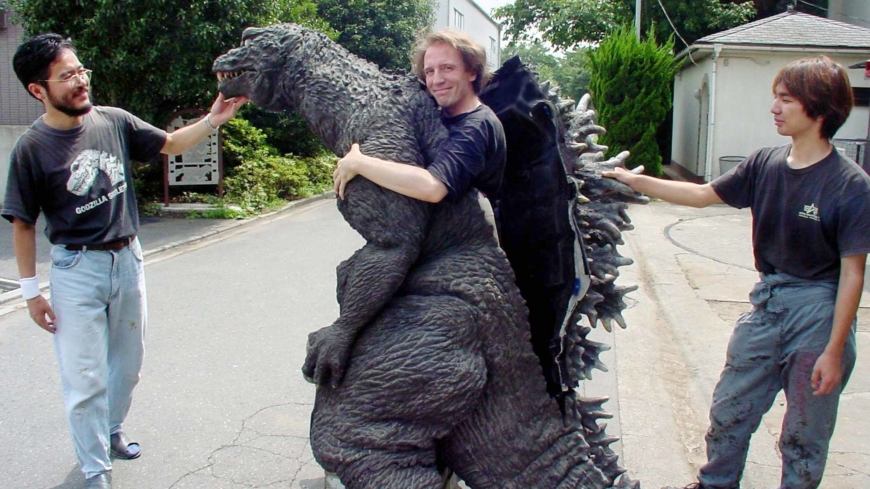 A look behind the scenes with Godzilla, the “King of the Monsters”

Norman England is a longtime fan of the giant monster movies of Japan, including Ishiro Honda’s “Godzilla”, the iconic 1954 film that launched the kaijÅ« kind (monster) around the world. His obsession led him to become the Japan correspondent for Fangoria, a horror movie fan magazine based in the United States.

In 1997, the year he joined the publication, England interviewed Shusuke Kaneko, who had directed “Gamera: Guardian of the Universe” (1995) and “Gamera: Attack of the Legion” (1997) – two films who revived a series starring the titular giant flying turtle that studio Daiei launched in the 1960s. The original films had been entertainment for children, but Kaneko took the series in a scarier, more grown-up direction that intrigued England.

Behind the Curtain of Kaiju: A Journey to Japan’s Greatest Film Sets, by Norman England
250 pages
AWAI BOOKS

His interview with Kaneko slowly turned into a friendship that lasted through the director’s work on “Gamera: Revenge of Iris” (1999) and two films in the “Godzilla” series, “Godzilla, Mothra and King Ghidorah: Giant Monsters All-Out Attack. (Abbreviated as “GMK”) in 2001 and “Godzilla: Final Wars” in 2004. With the support and encouragement of Kaneko, England has spent months on the sets of these and other “Godzilla” films. , Taking thousands of photos and emailing detailed reports to friend and fellow kaijÅ« movie buff Ed Godziszewski in the United States.

These emails and England’s detailed reports on Fangoria form the basis of the new book “Behind the Kaiju Curtain: A Journey to Japan’s Greatest Sets,” an insider tale of monster movie making. Japanese who goes into everything from his techniques to his unwritten rules, while bringing his personalities to life. The book also captures a time – the late 1990s and early 2000s – when the Japanese film industry was shifting from traditional practical effects, such as those involving monsters in human costumes, to green screens, and to infographics.

“The way they did ‘GMK’ is no longer done,” England told the Japan Times. â€œEven then, the craft that they were bringing to that, the miniatures and so on, was starting to fade away. At the time, I didn’t know I was there at the peak.

The process of writing the book took almost four years to sift, cut and rewrite with the help of publisher Patrick Galvan. I tried to convey the essence of the experience so that the readers would be there with me. This goal, he adds, was there since the beginning of his journalistic career: â€œI always had in mind when the opportunity arose to be on the set. So I tried to keep very precise notes on what was going on. And I took a ridiculous number of photos.

His original plan was to write a conventional â€œmaking ofâ€ book focused on the â€œGodzillaâ€ series, but when he first bought the proposition in the early 2000s, no one was interested. â€œGodzilla was really at one of his lowest points then,â€ he says.

Also, at this point, England’s relationship with Toho, the studio behind all of the “Godzilla” movies, was starting to crumble. â€œThey had really fallen on me,â€ he said. “Like why the hell is this guy so on set?” But I have enough already.

Nonetheless, he describes the experience of being on the sets of kaijÅ« as â€œmostly fun – I met a lot of great peopleâ€.

â€œThere were a few who resented my presence,â€ he adds. â€œIn general, however, people were excited about my interest. And they knew I was writing for Fangoria, which was really the key. Everyone wanted to be recognized in the West, so they saw that as my job. “

During the production of “GMK” – an experiment that is the centerpiece of the book – England launched an English web page for Toho filled with photos and news. â€œI still have fans today,â€ he says. â€œI always get people saying ‘I loved your reports.’ But Toho pulled the page two years ago.

In England, being on set and working directly behind the scenes was addicting. â€œEvery day was different. Every day was a new challenge, something new to see, like explosions. And I love explosions, â€he laughs. “Sure, some days were boring, like when they were doing things on the green screen, but I found the process of directing very interesting.”

As the only non-Japanese on set, however, he had to be careful not to upset the sensibilities of the staff, some of whom had worked on the show for decades. He mentions a veteran author of kaijÅ« books who visited the set of “GMK” and got excited when a light cast Godzilla’s shadow on the wall. “He was like ‘Oh my God, that’s the shadow of Godzilla!’ England says. “He really made the staff nervous by being too the otaku (obsessed fan). They ended up banning him from the set because he was too old-fashioned. I’m a Godzilla nerd too, but I knew he shouldn’t be taken seriously.

Instead, England made jokes to lighten the mood. He remembers a producer telling him, â€œWhen you’re on set, the staff are really excited. You have a very good effect on them.

“But then he asked me to tone it down,” England adds.

Especially at the beginning of his career as a reporter on the set, England sometimes went beyond what were invisible borders for him. Once, he was reprimanded by a representative of the cinema advertising for taking a lunch box, which was normally reserved for the team. “But Kaneko told me to take it,” he explains. Another time an assistant director yelled at him for talking to an actor between shots – another no-no – but the actor spoke to him first. â€œI said ‘I’m going home. Don’t yell at me. I just got home.

Soon, however, he was “in the trenches” again. â€œIt wasn’t all fun and games,â€ he says. “I was very aware that at any time I could do something wrong and get kicked off the board.”

In the end, England found themselves less accepted for following the line and more for their own love of cinema. â€œThis is how I managed to convince the filmmakers,â€ he says. â€œIt wasn’t so much about how I respected them. It was showing a passion for cinema and showing them that cinema was part of my being.

This included Kaneko, a reserved and scholarly bloke that England found unvailable when they first met. â€œHe wasn’t as accessible as some of the others, not as open,â€ he recalls.

Then one day they started talking about Steven Spielberg’s 1984 film “Indiana Jones and the Temple of Doom”, of which they were both huge fans. England’s description of a scene, in which a seemingly dangerous threat to Indiana and her companions turns out to be a clever visual gag, thrills Kaneko and breaks the ice. From there, a beautiful friendship began.

For England, this meeting was also a lesson in what really motivated people working long hours under harsh conditions to bring Godzilla and his scaly enemies to life: the explosion. “

Or, for that matter, to see the “king of the monsters” terrorize Tokyo.

In a time of both disinformation and too much information, quality journalism is more crucial than ever.
By subscribing you can help us tell the story well.