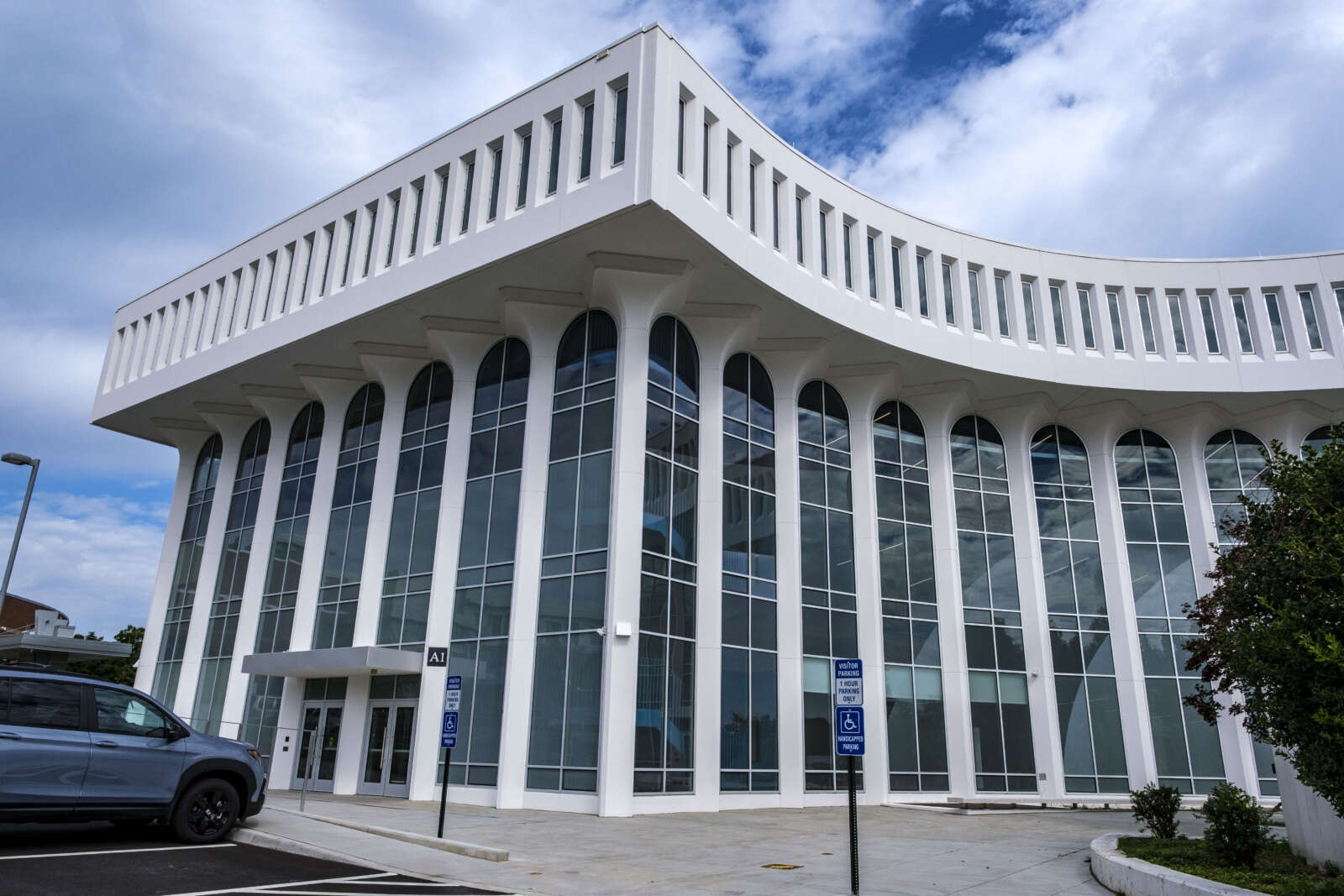 The $38 million transformation of the Washington-Liberty Annex is nearing completion.

Over the past three years, the nearly six-decade-old Arlington Education Center has undergone a complete overhaul to transform it into classrooms and school space for the burgeoning student body. It is the largest renovation in the building’s history, completed in 1969 and previously used as the headquarters of Arlington Public Schools. (APS administrative offices are now located in Sequoia Plaza.)

Yesterday we received an exclusive tour of the newly updated facility which now includes classrooms, rest areas, science labs, art studios, weight rooms, offices and flex space. The project reached substantial completion in June. With school less than two weeks away, there are only touch-ups, panels and inspections.

The annex is expected to be open to students when the new school year begins later this month.

The project’s goal, APS Design and Construction Manager Jeff Chambers told ARLnow, as he walked through the still-pristine hallways, was to transform an underutilized office building into usable, updated school space. up to date.

“With this building, it’s configured in such a way that it can be used for any type of classroom or for any level,” Chambers said. “It will be used by Washington-Liberty students when it opens, but it can be converted to be used for anything. The intent is that all classrooms can be modified and used for any program that absolutely needs.

The five-story, 55,000 square foot facility can accommodate between 500 and 600 students. The building is shaped like a “quarter donut”, as project manager Robin Hodges has described it, which allows almost every classroom to have a view of the outside while facing the common areas.

Each level except the ground floor is similar in layout, with the elevators set back, large windows, and a common area with seating and furniture. The footprint of the building has not been enlarged, although it may look like this.

“The ambient light in the classrooms and spaces really made a huge improvement, opened up the building a lot more,” Hodges said. “Everyone who was here before and is now walking down the halls is asking, ‘Did you make it bigger? No. We just have more daylight in the building.

Chambers likened the old building’s lack of sunlight and darkness, especially in the bathrooms, to walking into a famous Arlington landmark.

“It was like stepping into The Broiler on Columbia [Pike] and you’re looking for your steak and cheese,” he said with a laugh, noting that they simulated the movement of the sun and added window frits to help diffuse the sunlight throughout the building.

The ground floor of the building is made up of offices, conference rooms and new physical education spaces. WL’s weight room will be fully moved to the new building by the time classes start, giving students more space to work out. There are also several empty rooms that are meant to be used as aerobics studios.

When plans to turn the Arlington Education Center into classrooms or a new school were first discussed in 2017, there was talk of designating the “education center” and adjacent planetarium as a ” historic district” because of its architecture adapted to the period. style.

This request was denied by Arlington County Council, but the designers retained a few elements that pay homage to the 1960s aesthetic. The exterior still has its distinctive arches over the windows, and on the third floor these arches can be seen from inside.

“What we did was try to respect it inside. In some of the old renovations they installed drop ceilings and blocked them out. They weren’t really visible,” Chambers said. “We wanted to respect… the mid-century modern style [style].”

Another notable element is that the mechanical systems have been moved outside the classrooms not only to allow them to be maintained without disturbing the lessons, but also to reduce noise pollution. A LEED requirement for building new schools is to ensure that classrooms are “free from intrusive or disruptive sound levels”.

Ceilings are wood paneled and painted white and blue to simulate a clear, puffy sky. Hodges noted that this was done based on studies that say children learn best surrounded by certain colors and hues.

All bathrooms are designed identically, per a relatively new Arlington ordinance that all bathrooms in county-owned facilities must be gender-neutral. However, the bathrooms are currently marked with male and female signs. Chambers said it was just a signage and could easily be updated.

“The [state] The building code still requires your light fixtures to be counted as either male or female. We set it up in a way that it could be gender neutral,” Chambers said. “And [the building code] will change. This is simply not the case.

Plus, there are new, updated security and locking features, including drop-down curtains that completely obscure views, push-button locks on doors, and the ability to secure the entire building with the push of a button. a single button.

As WL was expected to see an increase in student population in the coming years, an expansion of its facilities was much needed. The renovation will help, without sacrificing the student experience.

“It’s an office building that’s been turned into classrooms,” Chambers said. “I think now when most people walk through here they’ll think it’s supposed to be a school.”