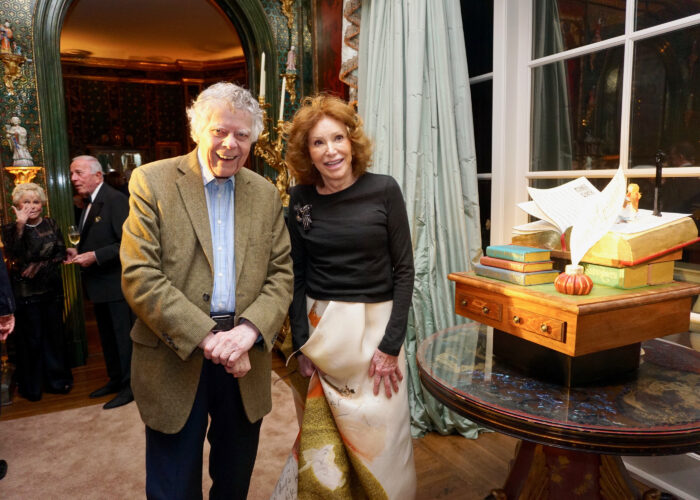 For nearly 50 years, Ann and Gordon Getty’s Pacific Heights mansion has been considered one of Northern California’s most famous interiors, due to its stunning period design and exquisite artwork and exquisite antiques.

Now 1,500 lots representing treasures from their collection will be offered for sale in a series of auctions starting in October, with proceeds benefiting the new Ann and Gordon Getty Foundation for the Arts, Christie’s announced on Tuesday 3 may. The auction house estimates as much as $180 million could be made, to be split among Bay Area arts and science organizations including the San Francisco Conservatory of Music, the University of San Francisco, the San Francisco Opera, San Francisco Symphony Orchestra, Berkeley Center for Geochronology, and The Leakey Foundation.

Among the lots from the first sale are works by Henri Matisse, Mary Cassatt and Jacques-Emile Blanche, as well as furniture by famous 18th-century craftsmen William and John Linnell.

“We have a long history of working with families and selling nearly every major collection that has come out of San Francisco,” said Ellanor Notides, president of Christie’s West Coast which opened the San Francisco office in 1982. , to The Chronicle. “But that, for me, is a personal record.”

Designed by the late Ann Getty, the public rooms of the house on the first floor are well known for their mixture of prestigious 18th and 19th century paintings and sculptures, European and Asian antiques and the use of rich textiles that were a signature of Ann Getty & Associates. interior design firm. Over the decades, the house has hosted politicians, movie stars and royalty, as well as being featured in design books and magazines. Famous as a setting for elaborate parties for both nonprofits and high-society gatherings, Chronicle columnist Herb Caen has referred to the house as the “San Francisco embassy.”

Gordon Getty, 88, a classical music composer, investor and philanthropist, is the fourth child of Getty Oil Co founder J. Paul Getty. The eldest Getty was a prolific art collector in his own right and eventually founded the J. Paul Getty Museum in Los Angeles.

After his father’s death in 1976, Gordon Getty sold the company to Texaco for $10.1 billion in 1984. In 2020, Forbes Magazine estimated Getty’s fortune at $2.1 billion and listed him ranked among the 400 richest Americans. Ann Getty, née Gilbert, died in September 2020 of a heart attack at age 79. The two married on Christmas Day 1964 and had four sons (Gordon also has three daughters with Cynthia Beck).

In 1987, the couple established the Ann and Gordon Getty Foundation, which has also contributed significantly to arts and education in the Bay Area. The Gettys’ newly created philanthropic foundation intends to disburse all funds from the auctions within the next three to five years. Bob Leberman, director of the Getty family office, said discussions about donating art and artifacts to museums in California and the Bay Area are also underway.

Ann and Gordon Getty moved into the Willis Polk-designed mansion in Pacific Heights in 1973, which would become the showcase for their collection for the next five decades. As well as allowing the house to be used for special charity events, the couple were well known for throwing a combined holiday and birthday party for Gordon each December that frequently spanned a gated street with a big tent.

In November 2021, the home was also the location of a wedding reception for their granddaughter, Ivy Getty (daughter of John Gilbert Getty), following her wedding to photographer Tobias Engel at San Francisco City Hall. Francis.

Jonathan Rendell, vice president and senior adviser to Christie’s Americas, said the Getty house “perhaps reflects a large London townhouse circa 1905. It’s the conversational (art) groupings, it’s the use of color is the use of period textiles…. It’s the way the colors of the paints and the colors of the textiles are all very subtly matched so that the whole thing becomes a work of art.

Gordon Getty told The Chronicle that the auction is “truly a tribute to Ann’s unrivaled taste and style and to the family home she has created for us in San Francisco”.

“It was our shared vision to sell this collection and dedicate the proceeds to the California arts and cultural institutions that she and I have long supported,” he added.

Among the lots from the first sale is Matisse’s 1902 painting “Chrysanthemums in a Chinese Vase”, hanging on a staircase. Rendell calls the work “absolutely signature for Ms. Getty” for the still life use of multicultural elements like a Chinese vase and Japanese chrysanthemums.

Cassatt’s 1878-79 pastel “Young Woman in a Box Looking Right”, which shows a woman holding a floral fan to her chest, hung in Ann Getty’s bedroom.

“It’s everything you want in a Cassatt,” Rendell said. “It’s Cassatt at the right time. It’s Cassatt versus (Paul) Gauguin and other friends in the Impressionist circle. She is a woman artist collected by a woman collector; there are many touch points which make it an important object.

A pair of black and gilt lacquered George II armchairs, originally created in the mid-18th century for the “Chinese” bedroom at Badminton House in Gloucestershire, England, by cabinetmakers John and William Linnell are among the furniture lots of the first sale. Rendell called the chairs “museum worthy”; the bed and two other chairs in the badminton room are part of the collection of the Victoria and Albert Museum in London.

“They are one of the most important furniture groups the museum holds,” Rendell said.

Further details, including October dates for sales and additional bundles, are yet to be announced. A world tour of some of the pieces for sale will kick off in Hong Kong from May 21-26. Christie’s has not yet been able to say if there will be any viewings of the lots in San Francisco.

“It’s unusual to see works by famous names from the 18th and 19th centuries in private homes,” said Jeremy Stone, San Francisco fine arts advisor and appraiser, as well as founder of Business Matters In the Visual Arts. “The way they are hung and installed in the Getty house, it feels natural because the house has such a historic feel. It’s the whole environment with the incredibly important period wallpaper and custom historic silk curtains, it’s all equally captivating.”